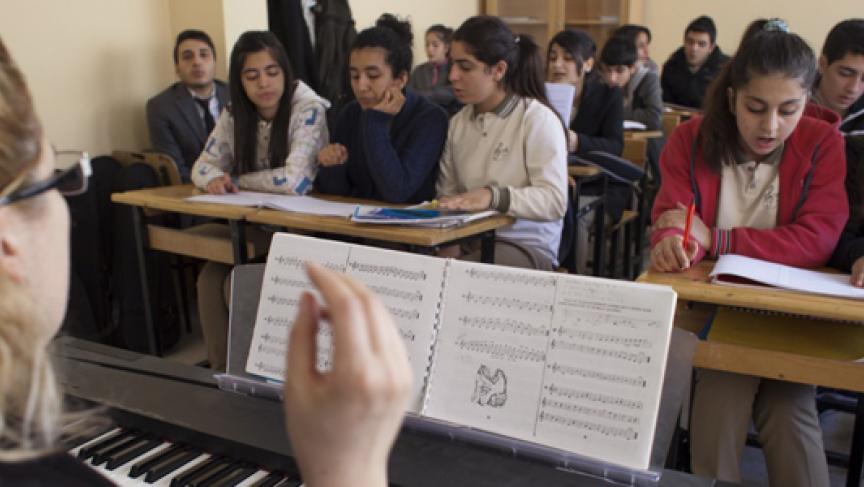 Share
Ninety years after the founding of the Republic, western classical music is still a hard sell in Turkey. Turks have been arguing for generations about whether their country belongs to the west or the east. Parts of Turkey border Greece and Bulgaria, but this state school in southeastern Turkey is only a few hours drive from Syria and Iraq. It's far away from the grand halls of Paris and Vienna. The state has expended enormous effort and resources to popularize western classical music in Turkey. But it hasn't gained much traction. Even here in this fine arts high school. Mustafa Baran teaches music theory. He says his students learn to appreciate western classical music with their minds, but don't really feel it in their hearts. "Their approach to the music is strange," he says. "Its just conceived of as a professional occupation. Classical musicians are seen as just doing a job. They don't see it as real music which is meant to provide relaxation and pleasure for the people listening to it." Turkey has strong musical traditions of its own. But Turkish music is completely different from Western music, in its own universe of structure, time signatures and rhythms. Locals prefer Arabesk, a hybrid Turkish-Arabic pop, which makes educated westernized Turks shudder. The fine arts school here in Diyarbakir was the first in this underdeveloped region. It has attracted some high profile support. Thousands of donors helped finance the construction of the building. Pop singer Sezen Aksu sold one of her houses to raise $350,000. For many Westernized Turks, promoting European classical music is a way to spread the values of western civilization. But despite decades of state prodding, locals still feel that western classical music is something foreign, says student Omer Chavur. "They find classical music cold. They don't find it exciting or interesting." Cellist Mazlum Mizrak says his fellow students hardly listen to the music. They even find his taste in music a bit odd. He explains it's because they have always listened to folk music, and only Turkish folk music, other music from outside doesn't attract them at all. Zuleyha Arancak plays the piccolo. She finds classical music refreshing. "Classical music sounds good to me," she says. "It cleans out my ears. We're always hearing Arabesque everywhere." Teachers at the school have recently formed a volunteer chamber orchestra with 23 members. It's Diyarbakir's first. They've already performed several times in the city. The public response so far, they say, has been "hopeful."