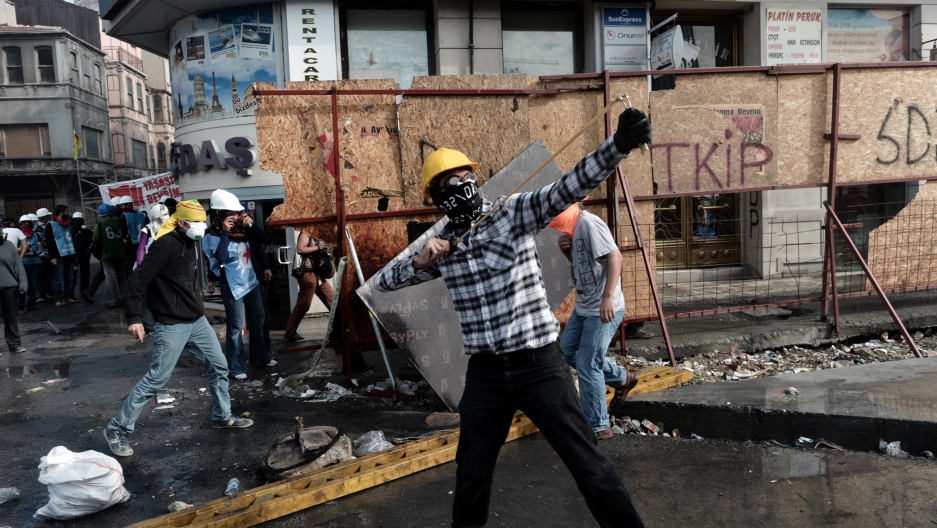 A demonstrator aims a slingshot in Taksim Square in Istanbul, early on June 11, 2013, as demonstrators and riot police clashed in a fresh escalation of unrest.
Credit: ARIS MESSINIS
Share

Clashes between Turkey's riot police and protesters continued all day and into the night Tuesday.

Early on Tuesday, hundreds of Turkish riot police stormed into Taksim Square, the central Istanbul plaza that has been occupied by anti-government protesters for almost two weeks.

Authorities said that the aim of the operation was to take down banners protesters had attached to a statue and overlooking building, not to disperse the crowd.

The banners made the square look as though it was under "occupation" and were "negatively affecting our country's image in the eyes of the world opinion and leading to reaction from within the society," Istanbul's governor, Huseyin Avni Mutlu, said in a statement. They were replaced by a large Turkish flag and a portrait of the founder of modern Turkey, Mustafa Kemal Ataturk.

Here's an aerial view of Taksim Square this morning as police have entered the area. twitter.com/JoeWSJ/status/…

Protesters remained wary, however, according to the Guardian's correspondent on the scene. "The police have made public announcements saying they are not going to raid the park, they are just going to clean up the square. But right now they just teargassed the front steps of Gezi Park. [...] It is an atmosphere of massive confusion," correspondent Constanze Letsch reported.

The clashes continued all day, with the police trying to drive out thousands of protesters from the square with tear gas and water cannons.

Some observers saw the police's arrival as a show of force intended to intimidate protesters ahead of Wednesday's scheduled talks between Prime Minister Recep Tayyip Erdogan and the organizers of the original Gezi Park sit-in.

Speaking in Ankara Tuesday, Erdogan said, "To those who ... are at Taksim and elsewhere taking part in the demonstrations with sincere feelings: I call on you to leave those places and to end these incidents and I send you my love. But for those who want to continue with the incidents I say: 'It's over.' As of now we have no tolerance for them."

"Not only will we end the actions, we will be at the necks of the provocateurs and terrorists and no one will get away with it," he said, according to The Independent.

Plans to develop the city green space triggered the first protests, which rapidly swelled into nationwide rallies against Erdogan and his government when police were sent in to disperse crowds in Gezi Park. Three people have died across Turkey and more than 5,000 were injured.

The government has blamed the "illegal" protests on thugs and foreign provocateurs.

Footage of a man in a wheelchair being hit by a water cannon was circulated widely on Tuesday:

Here's some footage I shot with my iphone this morning aa police moved into Taksim Square. on.wsj.com/14RJYr8