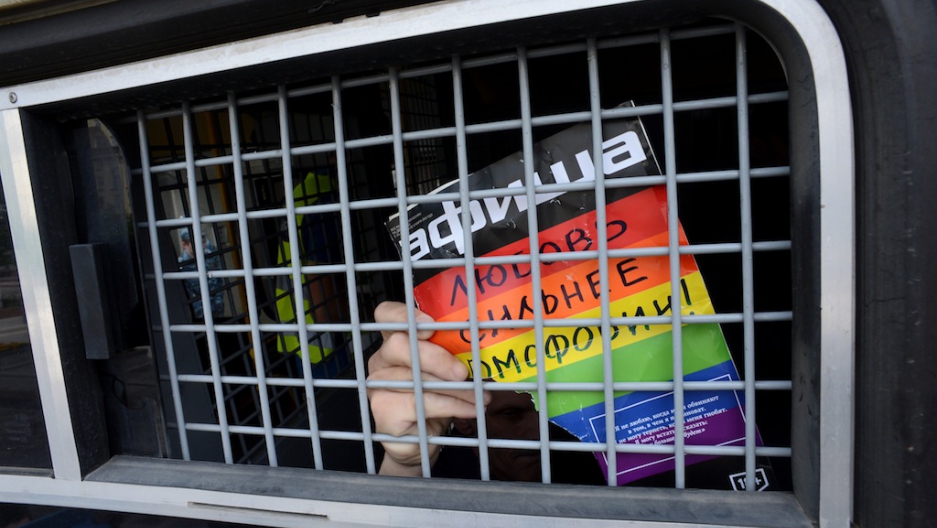 A Russian gay and LGBT rights activist shows sign reading 'Love is stronger than homophobia' from inside of a Russian riot police van during unauthorized gay rights activists rally in cental Moscow on May 25, 2013.
Credit: Kirill Kudryavtsev
Share

Russia's lower house of parliament on Tuesday approved a socially conservative anti-gay bill that would outlaw the dissemination of "propaganda of nontraditional sexual relations" to minors.

The controversial measure, passed by the State Duma with a 434-0 vote, including one abstention, will impose large fines on those involved in gay pride rallies and the distribution of information about the lesbian, gay, bisexual and transgender, or LGBT, community to children.

Private citizens found guilty could be forced to pay the small amount of $154. The fine would significantly increase for those publicizing their views on the internet or other media. Organizations could pay up to $30,000 and face suspensions of up to 90 days.

“Traditional sexual relations are relations between a man and a woman, which... are a condition for the preservation and development of the multi-ethnic Russian people,” lawmaker Yelena Mizulina told the Duma on Tuesday, echoing previous remarks of President Vladimir Putin, who has criticized gay people for the country's population decline.

Enourgaged by the Russian Orthodox church, the legislature was introduced after the jailing of members of the punk band Pussy Riot for performing a protest in Moscow's main Russian Orthodox cathedral last year. Although the government ended the Soviet-era criminalization of homosexuality in 1993, Russian society remains overwhelmingly anti-gay.

Outside the Duma, as lawmakers voted on the bill, Russian police detained more than 20 gay rights activists involved in a "kissing protest” against what some see as part of a broad effort by Putin to oppose Western liberalism and stifle dissent since his re-election to a third term last year.

“There is already enough pressure and violence against gays and with this law it will only continue and probably get worse,” Viktoria Malyasova, 18, told Reuters outside the Duma. “I may not be gay but I came to stand up for my rights and the rights of other people to love whom they want."

Around 200 anti-gay activists chanted "Russia is not Sodom" and threw eggs at gay rights protesters.

Before becoming law, the legislation must undergo the formality of approval by parliament's upper house before its signing by Putin.