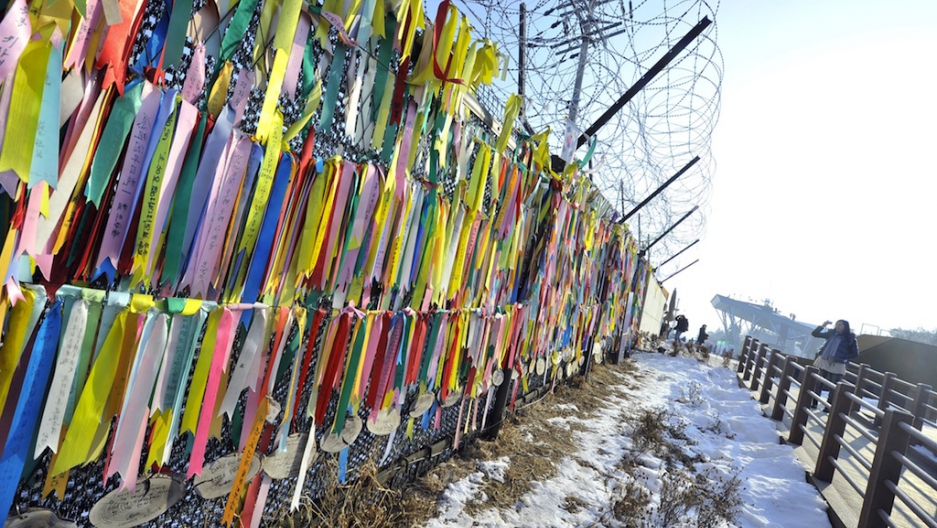 A visitor looks at 'reunification ribbons' displayed on a military iron fence at Imjingak peace park in Paju near the demilitarized zone dividing the two Koreas on Feb. 13, 2013.
Credit: Jung Yeon-Je
Share

UPDATE: The talks planned between North and South Korea were scrapped a day before they were due to begin. A spokesman for Seoul's Unification Ministry told reporters Tuesday that the talks were called off because of a stalemate over who would lead each delegation. The analysis below still reflects the situation between the two countries.

SEOUL, South Korea — When North and South Korea hold talks in Seoul on Wednesday and Thursday, top of the agenda is whether to reopen the suspended Kaesong Industrial Complex.

The business park, which lays idle after North Korea withdrew workers on April 8, is a special project north of the demilitarized zone (DMZ) near the border between North and South Korea.

About 800 South Korean managers employ some 53,000 North Korean factory workers, who make wages of more than $120 a month churning out handbags and shoes. By North Korean standards, the pay is excellent.

South Korean companies, on the other hand, get to employ workers who speak the same language and understand their customs. The cultural similarities give North Korean cheap labor one convenient edge over outsourcing destinations such as China, Vietnam and Indonesia.

The North Korean government also earns an estimated $100 million in yearly profits from the complex. Revenues are particularly valuable because they arrive in the form of much-needed foreign currency. The arrangement is especially desirable ever since a 2009 reform wiped out the savings of many North Koreans and destroyed trust in the local currency.

This week, though, grander causes are at stake than the future of the economic zone itself.

The Kaesong zone “is wrapped up in political symbolism, emotions, and national identity,” said Daniel Pinkston, a Seoul-based senior analyst for the International Crisis Group, a non-profit group that researches conflicts around the world.

North and South Korea have been divided for more than 60 years. The Korean civil war of 1950 to 1953 ended with an armistice rather than a peace treaty, meaning both sides are technically still at war. (South Korea refused to sign the ceasefire.)

Founded in 2004, the park was the brainchild of former South Korean president Kim Dae Jung and his now-defunct “Sunshine Policy.”

From 1998 to 2008, Seoul witnessed a rapprochement with its hostile foe. President Kim met his counterpart, late North Korean dictator Kim Jong Il, at a historic summit in 2000. He later won the Nobel Peace Prize for his efforts.

“It’s more than just a business transaction,” Pinkston told GlobalPost. “If Kaesong is closed down, the Koreas are moving further away” from the prospect of unifying into a single nation.

“For Koreans, it’s about the tragedy of national division,” he said.

The suspension of the Kaesong Industrial Complex in April marked the symbolic end of the era of reconciliation, said Leonid Petrov, a research fellow at the Australian National University in Canberra.

The closure, and prospect of reopening it, will also put South Korean president Park Geun Hye to the test over her ability to realize those dreams following a number of campaign promises on North Korea. Last week, South Korean newspapers gave her mixed reviews for her first 100 days in office.

In late 2012, Park was elected partly on a platform of “Trustpolitik." The policy entailed a gradual and reciprocal building of relations with the North linked to an end to its nuclear program.

More from GlobalPost: Is North Korea evil and clownish?

In early February, North Korea threw a wrench in reconciliation plans when it tested its third nuclear device.

Then, in response to a round of UN sanctions, the country embarked on two months of threats against the US, Japan and South Korea.

The war of words put Park in a difficult position. She took office two weeks after the North tested its warhead.

But her steady and resolute hand in dealing with Pyongyang lifted her approval ratings despite financial scandals among her cabinet nominees, according to the Asan Institute, a conservative think-tank in Seoul.

With all eyes on the administration, and the idealism of the Sunshine era fading, the negotiations are an opportunity that carry both high risks, and high rewards.