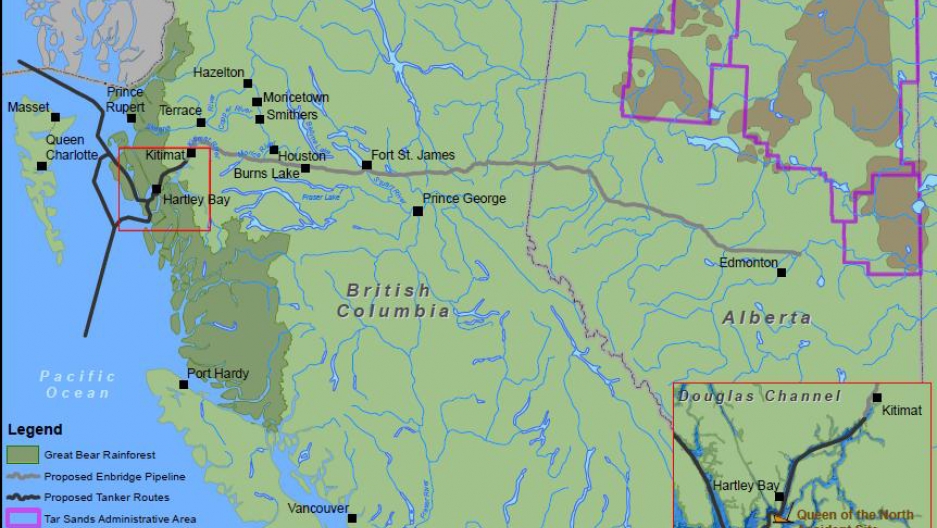 The proposed Enbridge Pipeline would have carried oil sands oil through British Columbia to tankers on the Pacific Ocean. (Map courtesy of the Natural Resource Defense Council.)

The Canadian west coast province of British Columbia has rejected a proposed pipeline to bring oil sands to its ports.

The decision likely means more troubles for the proposed and hotly debated Keystone XL pipeline through the United States to Texas refineries. Activists are fighting hard against Keystone XL, arguing it would aggravate global warming. On the other hand, the U.S. State Department argues the oil sands will be exported, with or without Keystone.

"Basically, the British Columbia government said 'no' to moving half a million barrels a day across 600 miles across rugged and pristine areas of British Columbia," she said. "And they did that because of the risk of spills to that pristine environment, the risk to the commercial salmon fishery and the risk to human health."

According to Droitsch, the B.C. government drew a distinction between oil sands oil and conventional oil, with oil sands oil solid in its traditional state and relying on chemicals to force it through a pipeline.

"So this actually poses much greater threats to water," Droitsch said.

To be sure, approving the pipeline is the province of the federal government, so the B.C. decision could be largely symbolic. But it would be very unusual.

"The federal government could go ahead and ignore what the province has said and approve the pipeline, but there are a number of risks in doing that," Droitsch explained. "Sixty percent of British Colombians are opposed to the tar sands pipeline that has just been rejected."

Canada's First Nations communities also play a role in the decision. Some 70 of them are along the pipeline's proposed route — and all of them oppose the pipeline.

And that's even more significant than the province's rejection, because, while the federal government can overrule the province, it doesn't have the authority to overrules the First Nations.

"And that's really where a lot of financial analysts are basically acknowledging that because there are 70 First Nation communities with legal constitutional rights to stop the project, they’re basically saying this project is not likely to move ahead at all," Droitsch said.

With Keystone not yet approved, this pipeline seemingly dead on arrival and resistance from First Nations communities around Canada, oil companies are having to get creative. Droitsch said they're looking east and north — to the Arctic Circle — for transportation options.

"But really all those other projects have tremendous hurdles; there's either significant Canadian opposition, there’s First Nations opposition, it’s economically not feasible, and that is why Keystone XL has become a focal point for the industry," she added.

But this decision may deal a blow to that effort as well, Droitsch argues, because the State Department has said the oil sands will get to market somehow, whether Keystone is approved. But now, the environmentalist argues, the options are dwindling and that may not in fact be the case.

"It really illustrates that tar sands development is not inevitable," she said. "The tar sands industry will not be able to get its product to Asian markets through the Canadian lands. They’re planning, the tar sands industry is planning to get its product through the United States to international markets. Keep in mind that Keystone XL is not a pipeline to America — it’s a pipeline through America."