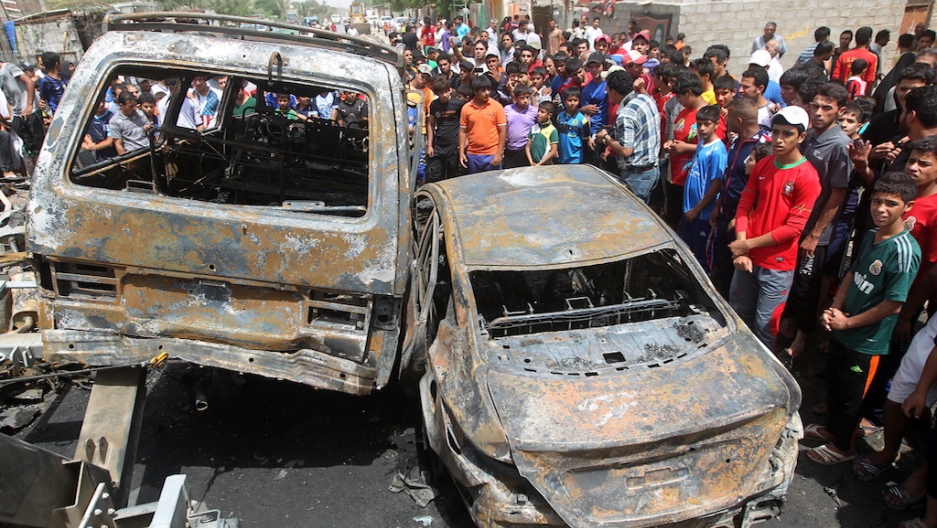 Iraqis gather around burnt vehicles at the site of a car bombing at a market in Baghdad's impoverished district of Sadr City on May 16, 2013 as at least eight people were killed in blasts across the country. Violence in Iraq has fallen from its peak in 2006 and 2007, but attacks remain common, killing more than 200 people in each of the first four months of this year.
Credit: Ahmad Al-Rubaye
Share

A wave of attacks across Iraq killed as many as 73 people Monday, with most of the violence targeting security forces in Sunni areas of the country.

Reports have varied on the number of dead after the day-long attacks, but the latest have said a previously reported toll of 57 has now been updated to 73.

Several car bombs exploded almost simultaneously in a vegetable and fruit market in the town of Jadidat al-Shatt in Diyala province, and insurgents also attacked the towns of Tuz Khormatu and Sulaiman Bek, near Kirkuk province.

Two bombs targeting a federal police checkpoint in Madain, a town south of Baghdad, killed three and injured 10. Another bomb exploded at a café in the northern Baghdad neighborhood of Sadr, killing one and wounding eight.

No one has claimed responsibility for the violence, but officials have blamed the majority of attacks since April on Sunni Islamist insurgents with links to Al Qaeda.

The insurgents have launched similar coordinated attacks as a way to undermine confidence in Shiite-led authorities and security forces. Targeting fellow Sunnis is "ostensibly a bid to provoke retributive violence against Shiite Muslims," Agence France-Presse reported.

There have been a heightened level of attacks since the beginning of the year, and May's violence pushed the month's death toll to the highest level since 2008, creating new concerns of a revival of the country's 2006 and 2007 sectarian war.