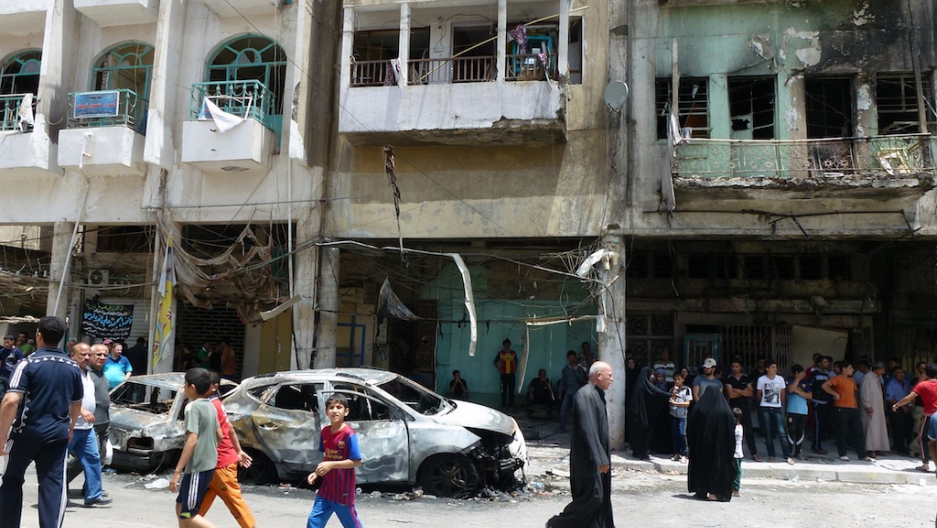 Iraqis walk past damaged buildings and burnt out vehicles following a car bomb that exploded the previous day in the commercial centre of the capital Baghdad on May 28, 2013. Violence in Iraq has killed more than 500 people in May, AFP figures showed, as authorities struggled to contain a wave of unrest that has raised fears of new sectarian conflict.
Credit: Sabah Arar
Share

At least 20 people are thought to be dead after a series of car bombs tore through a bustling market in the Iraqi city of Jadidat al-Shatt, 25 miles north of Baghdad.

The explosions hit the majority Shiite town's local wholesale market, in what appeared to be an orchestrated set of three car bombs, according to the Associated Press.

"I was selling watermelon and suddenly I heard a powerful blast at the entrance of the market. I fled from dust and smoke when a second blast turned the place into hell," victim Hassan Hadi told Reuters. "I was hit in my leg and lay down in shock."

Another car bomb exploded Monday in Taji, a suburb of northern Baghdad, killing seven people and wounding 25 others.

‘‘When the grip is tightened on these groups, they resort to random attacks on residents and foreign pilgrims in order to show to the people that they are still active,’’ provincial councilman Sadiq al-Husseini, who fingered Al Qaeda for the Monday blasts, told the Associated Press.

"Our security forces still lack intelligence and bomb detecting equipment’’ to stop such attacks, he added.

Sectarian violence — especially by Sunnis against Shiites — is spreading in Iraq, which has recently seen its worst spate of attacks since 2008. Nearly 2,000 people have been killed in such attacks since April of this year, sparking fears that continuing unrest could destabilize the nation, according to Reuters.

On Friday, six Shiite pilgrims from Iran were killed and 23 others wounded while en route to worship at the holy city of Najaf, when a car bomb exploded in the town of Muqdadiyah.

UN envoy to Iraq Martin Kolber said that Iraq is "ready to explode," according to the Daily Star.