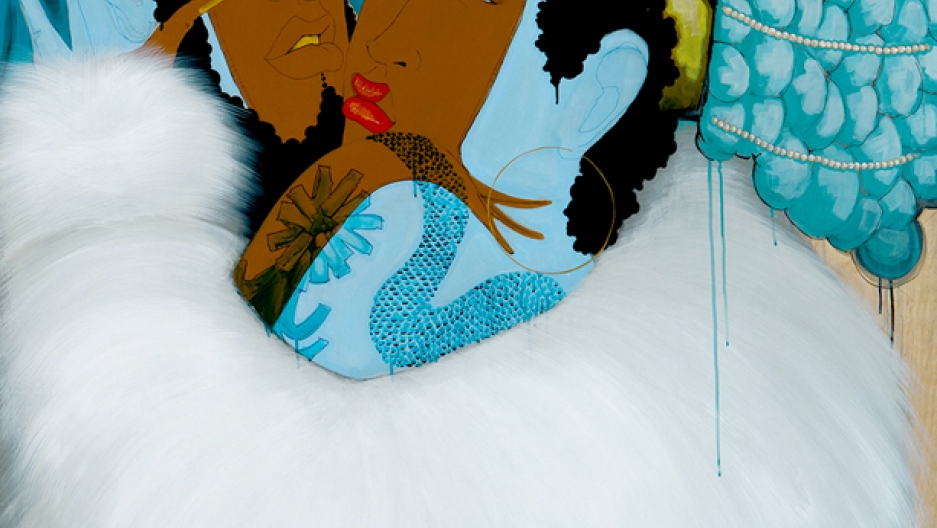 The defining medium of our time has to be the mashup.

There are mashup videos, mashup songs, mashup literature — wherever there’s a will to combine disparate bits of entertainment or art, there’s a mashup. And when it’s done right, the result can be something fresh and illuminating.

“When I was about 7 or 9, my mother took me to see the bunraku at the Kennedy Center,” she said, “and I remember being really focused on the dolls and the movement.”

Brown was also a big fan of vintage anime such as Kimba and Speed Racer.

“It just stayed with me, and I never really presumed that it wasn’t supposed to be in my life,” she said.

Ganguro, which translates as “blackface,” challenged the Japanese ideal of beauty — pale skin and dark hair — but it troubled Brown.

“They’ve got white around their eyes and around their lips,” Brown said. “It immediately made me think of Al Jolson.”

All of Brown’s obsessions converge in the huge diptych Pod 222: The Reunion (Song of Solomon 5:10-11). In it, a racially ambiguous couple with both Asian and African features are intertwined on top of a black fur rug in front of a wall of stereo speakers. Brown skin covers their blue skin like a mask. And the woman has an impressive pile of blue braids balanced on her head.

“This particular hairstyle was inspired not only by the extensions and braids that we as African-American women will sometimes don, but the Miao women of China had these huge hairstyles,” she said.

What Brown does as a visual artist is akin to what DJs do when they mix samples of Punjabi bhangra with Parliament-Funkadelic. It’s not a coincidence that Brown is also a turntablist.

“Maybe because of the fact that I’m a DJ, I felt like I could just freely sample,” she said. “But my intention has always been one of respect.”

Brown’s painting are currently on exhibit in the Seeds, Pods, and Saplings: The Convergence of Three show at the 200 I Street Gallery in Washington, D.C.