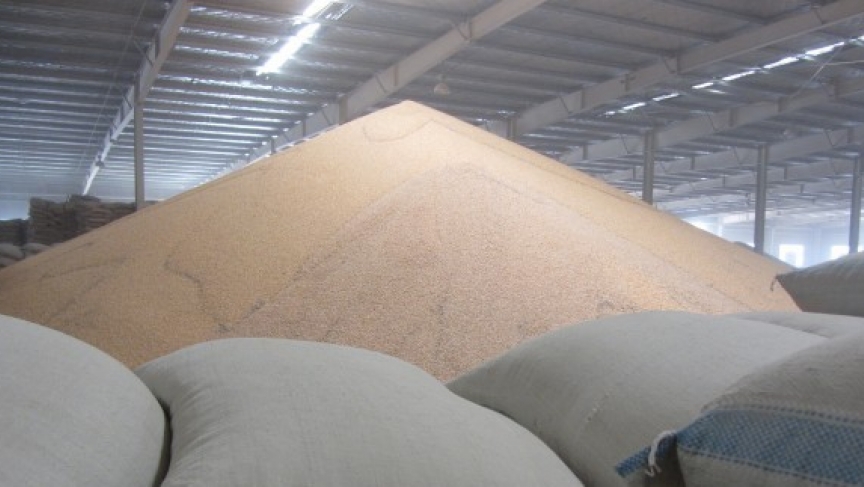 A mountain of grain in a Chinese warehouse. China is importing more of its supply of thirsty and land-intensive crops like corn and soy, often from leased or purchased land that guarantees a supply outside of the regular international market.

Securing a safe and uninterrupted supply of oil was a major priority of wealthy nations in the 20th century. In the 21st century, many countries may place a similar emphasis on food. In China, which is facing huge population, environmental and climate stresses, the government is building what you might call a "food pipeline" to import food from beyond its borders free of competition on the international market.

Inside a duck restaurant on Beijing’s Ghost Street, red lanterns hang outside to entice patrons in, and greeters in imperial garb sing out a welcome to those who choose to enter.

“I love it when they shout the greeting,” says Tom Reardon, an American agricultural economist who teaches at Michigan State University, and sometimes at Beijing’s People’s University.

We order up – pea leaves, duck, of course, scallops and tofu, served with a light soy sauce.  Classic Chinese fare.  But these days, Reardon says, more and more of the food Chinese eat doesn’t necessarily come from China.

“Any time you have the extremely fast ramping up of a food system, it’s under a lot of strains and pressures and difficulties,” he says.  “How to get more?  How to get it on time?  How to have a stable supply?  How not to have a problem with shorts in supply because of a climate shock, like a flood?  How not to have a food safety crisis?  The wider the net you cast to get your food, the less vulnerable you are to a shock from any given source.” 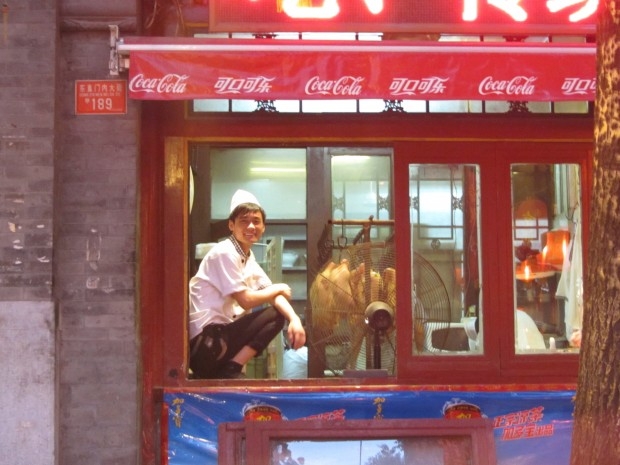 A traditional duck restaurant in Beijing. Growing demand and increasing environmental and climate pressures have forced China to abandon its longstanding goal of feed self-sufficiency.

And so, Reardon says, it makes sense that China has started to look beyond its borders to secure its food supply, even though this is a shift from the Communist Party’s longstanding goal of food self-sufficiency.  But it has little choice.  China’s population is becoming more affluent, and eating a richer, more varied diet, including ever more meat.  It takes a lot of water to produce the grain to feed and raise livestock, and the water table is plummeting on the arid northern China plain, where much of China’s grain is grown.   So China is now importing 80 percent of its soybeans, and increasing amounts of its corn.

But here’s the twist.  Only some of the imports are bought on the international market.  Commodities markets can be risky and volatile, and China wants a sure thing.  So, it has begun to build a kind of ‘food pipeline,’ buying or leasing farmland in other countries, while also making deals to set up dedicated supply chains that bypass the market.

Smart move for China, perhaps.  But what about the other side?  When Chinese state agribusinesses first starting checking out Brazil and Argentina, they tried to buy up farmland.  That caused alarm, and questions about whether China was trying to colonize those areas.  In response, both Brazil and Argentina passed laws limiting how much farmland a foreign entity can buy.  So most of their agricultural deals with China now are done through land leases, or dedicated supply deals.

China is also looking for opportunities in Africa, which has 60 percent of the world’s as yet uncultivated farmland.  Chinese companies have leased land in several African countries.  And the reception has been mixed.  Some Africans believe that, done right, land deals can be a good thing for Africa.

“African countries are leasing out land to investors, to attract foreign direct investment in the African economy,” he says.  “Many are well-thought-out initiatives.  Many African countries are dependent on one commodity.  If it’s Sudan, it’s oil.  If it’s Zambia, it’s copper.  And many of these countries want to diversify from being one-commodity economies. Agriculture presents a very viable alternative to diversify.”

Nyong’s response to critics who say African countries shouldn’t be leasing farmland if they don’t have enough food themselves is, ‘should the same apply to oil?  Many African countries are also exporting oil when they don’t have enough energy at home.’  He argues that the money African governments make on such deals can go to schools, hospitals, and other investments that can help a country diversify from subsistence agriculture and break out of a cycle of poverty.

In practice, critics of land leasing say, not all money from such deals goes to serve society – more, to enrich the leaders making deals of questionable long-term value to the host country.

“In the name of investment, most African governments are offering huge tracts of land to investors for long leases, which cannot be terminated easily without financial implications,” says Frightone Sichone, Zambia’s former land commissioner, and now an independent land rights advocate.

Sichone believes leases of land to foreign investors should be contingent on the investors being able to show, first on small parcels of land, that they can effectively develop the land in a way that will benefit the local population in the long term.

Instead, he says, too often in Africa, promises get made, deals get done, and local farmers get burned – kicked off their land, and left to be day laborers.

“There’s very little respect paid to the indigenous people when it comes to acquisition of land,” Sichone says.  “They’re not talking to the people who will be directly affected.  Singing about creating employment is not enough ... We have no capacity to process (commodities) locally.  It means we’re simply going to provide a production center for raw materials for the Chinese market.  Our people are going to have meager salaries, and it will go to people who will make a profit turning it into a finished product.”

Resistance to such a fate led to public outrage in the Philippines, when word got out that a quiet deal had been done in 2007, for China to lease 2.5 million acres, to grow crops to ship back to China.  Eventually, the deal had to be suspended. 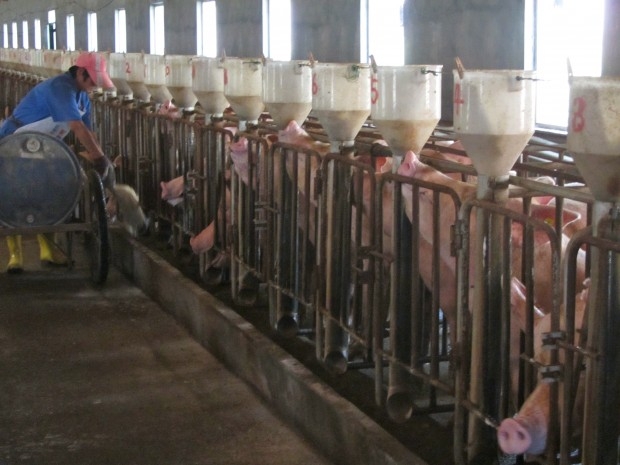 Pigs and other livestock in China are increasingly fed on imported grain. Demand for pork is booming in China, pushing past the country's own agricultural limits.

But – China’s not alone in staking out foreign farmland.  It’s not even #1, according to a study published in January 2013 by the Proceedings of the National Academies of Sciences. That slot goes to Great Britain.  In second place is the United States.  China is third.  Also on the list are Saudi Arabia, the United Arab Emirates, South Korea, Israel, India and Egypt, all of which are challenged to produce enough food at home, and have significantly increased their total harvest by farming abroad.

For China, the difference has been huge, a gain of 32 percent in ‘virtual cultivated land.’  Of course, China started out at a disadvantage; it has about 20 percent of the world’s population, but only about 9 percent of its arable land, and only a third as much water per person as the global average.

“You know, we have a big population, and land is limited,” says Wan Ruojun, a professor at China’s Agricultural University in Beijing.  “In the United States and Canada, you have space and land, and fewer people.  So you can manage this kind of agribusiness (large-scale farming) very well.  But in China, we have so many businesses competing for land, for water, for different resources.  So agribusiness in China really is difficult.”

If going abroad helps China secure a better, safer, cheaper supply of food for its people, Tom Reardon says, it’s following the same path the United States took in the first half of the 20th century, which he says was undeniably good for the US then, and is good for China now.

“Having cheaper food, and a more stable supply of food, in a country that has suffered from periodic famines ... is a big, wonderful, fantastic, unbelievably positive thing,” he says.

Reardon’s not fussed by dedicated food supply deals, as long as the other countries are benefiting too.  What he is fussed by, in tongue-in-cheek kind of way, is that we ordered a whole roasted duck.  We watched the chef in the tall white hat carve our duck at our table.  But then, what ended up on the serving plate was a modest portion, certainly not a whole duck.

“I’m the kind who obsesses that most of the duck didn’t get given to us,” Reardon quips.  “You know, we paid for it.  And, you know, I want the rest of that duck. But now, it’s obviously being sold to someone else.”

Well, the food game isn’t always fair.  The challenge is to make sure that if everyone doesn’t get everything they want, at least everyone gets enough.  China’s working on that, for its own population, in every way it knows how.