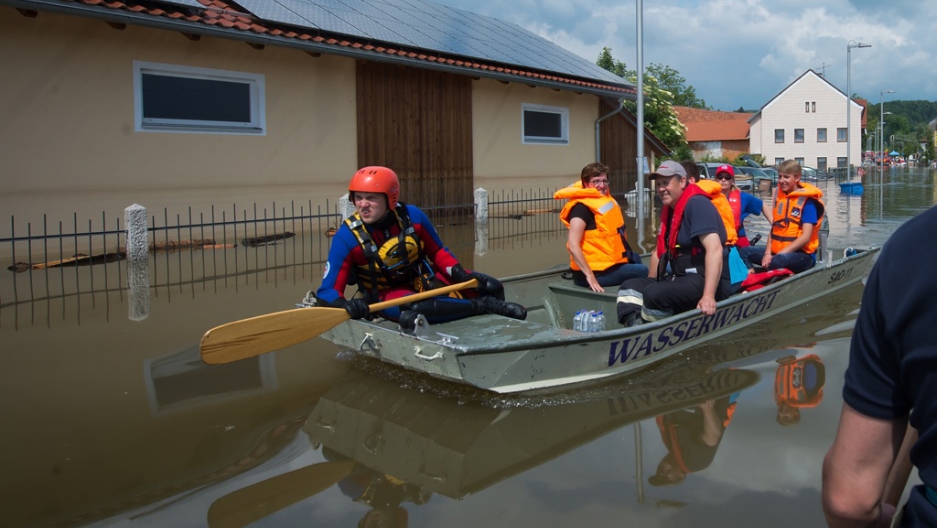 Rescue forces from the bavarian red cross (BRK-Wasserwacht) help residents to get private stuff from their homes out of the suburb Fischerdorf, which is flooded by the swollen Danube river on June 7, 2013, in Deggendorf, Germany.
Credit: Joerg Koch
Share

As intense storms happen more frequently, is it time to stop building homes and businesses along bodies of water? The latest natural disaster has flooded central Europe, devastating parts of Austria, Germany and the Czech Republic.

And now, problems are expected to strike in Hungary along the Danube river, Europe's second-longest river. The river will reach as high as 29 feet--an unprecedented level--in Hungary's capital of Budapest this weekend.

"We are facing the worst floods of all time," PM Viktor Orban announced.

People who live nearby are placing sandbags around their homes, and brave emergency volunteers are also camping out to help, BBC News reported.

The effort has in fact attracted as many as 10,000 Hungarian soldiers and volunteers, Al Jazeera reported. But these last-minute preparations, well-intentioned as they are, clearly aren't a full-proof way to prevent tragedy.

Fifteen people have already died in the flooding striking Europe this week.

The storm comes just as the widest tornado on record killed 15 people in Oklahoma this week. But the flooding draws closer parallels to Hurricane Sandy, the "superstorm" that ravaged much of the United States' East Coast last fall.

Both the European flooding and Sandy have lead experts to warn that the effects of global warming are already upon us, while a familiar chorus shot back that there was no proof that global warming caused any of the storms.

But of course, there wouldn't be, because global warming doesn't actually cause individual storms, experts say, it just makes storms more intense than they would have been without man-made global warming in the picture.

In Germany, Deutsche Welle spoke to climate scientists who said that there has been a severe increase of rainfall that is expected to get worse as the planet warms. "If we look back over the past few decades, heavy rainfall seems to be occurring twice as often as was the case 100 years ago," climate scientist Mojib Latif from the Helmholtz Center for Ocean Research told DW.

The storms come less than three months after central Europe was battered with snow and ice, the result of a "disturbance" in the global wind pattern that is likely caused by the Arctic's warming, climate experts explain.

But acknowledging that global warming is real and man-made clearly isn't very useful to people who live in danger zones. Rather, experts say it's time to start preparing more ahead of time.

After Superstorm Sandy hit, the New York Times had found that experts were warning officials for years that much of New York City is in an at-risk flood zone. But it wasn't until after the storm that officials took their first "tentative steps toward considering major infrastructure changes" in the city, the Times said.

The Council on Foreign Relations similarly warns that reducing emissions and switching to alternative sources of energy isn't enough to mitigate the damaging effects of climate change--"substantial efforts will still be required to adapt to unavoidable change," such as making a change in infrastructure and farming, the CFR says.

At this point, it seems that investing in a waterfront condo in a flood-prone area is not a safe bet, even if everyone in the world gets serious about using more solar and wind energy.