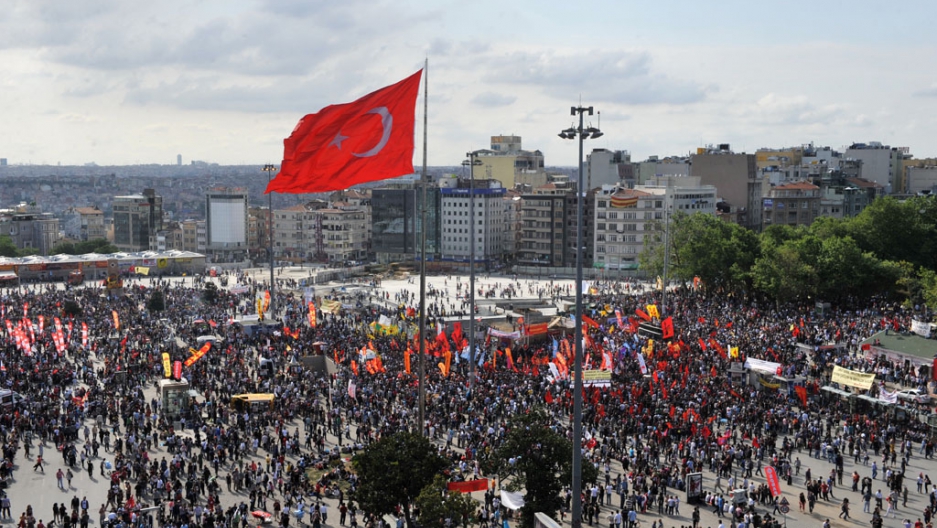 Protestors gather on Taksim square on June 2, 2013, a day after Turkish police pulled out of Istanbul's iconic square following a second day of violent clashes between protesters and police over a controversial development project. Thousands of demonstrators flooded the site as police lifted the barricades around the park and began withdrawing from the square. What started as an outcry against a local development project has snowballed into widespread anger against what critics say is the government's increasingly conservative and authoritarian agenda.
Credit: AFP
Share

The Turkish government’s conciliatory gestures towards anti-government protesters appeared to have had some success in calming tensions in Istanbul today, CNN reported. For the first time in a week, the sky over Turkey’s capital city was clear instead of clouded with tear gas.

Protesters have been demonstrating against the government across Turkey since May 31, when police used excessive force to break up a demonstration against a park development plan in Istanbul’s central Taksim district.

Deputy Prime Minister Bulent Arinc has apologized for the behavior of the police and government officials have met with protest leaders.

Still, a police officer was killed while attempting to control protesters in the city of Adana on Wednesday night, CNN reported.

And even though Turkey’s Prime Minister Recep Tayyip Erdogan said before leaving the country for North Africa on June 3 that he was “restraining” his supporters from pushing back against protesters, a pro-government group attacked demonstrators in the town of Rize on Wednesday, Bloomberg Businessweek reported.

It’s the first reported incident of a direct clash between Erdogan supporters and government opponents.

Erdogan is due to return from North Africa this evening.