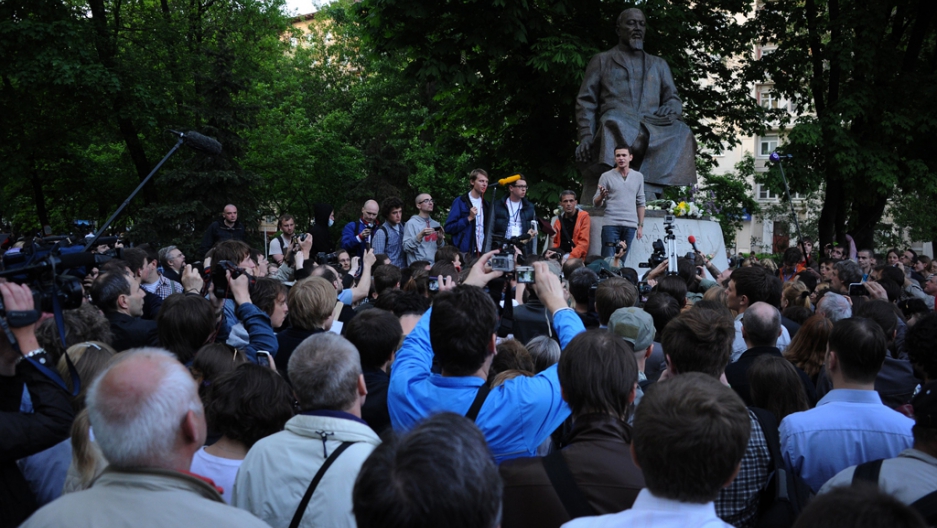 Opposition activists listen to one of their leaders, Ilya Yashin (back L), during a rally at their camp in the Chistye Prudy district in central of Moscow, on May 15, 2012. The hundreds of opposition supporters who staged a week-long sit-in protest in central Moscow against Putin's rule were dispersed by police on the morning of May 16, 2012.
Credit: NATALIA KOLESNIKOVA
Share

The trial of 12 anti-Putin activists began today over charges of their involvement in "mass riots" in central Bolotnaya Square that descended into violence on the eve of Vladimir Putin's 2012 inauguration.

Kremlin critics have called it a throwback to Soviet mass show trials and a centerpiece of Putin's battle to silence dissenters under his third term as president.

"This is a landmark trial," human rights activist Alexander Podrabinek told Agence France Presse. "It brings us back to the time of systemic repression against peaceful opponents of the regime. The authorities are trying to thwart mass rallies and intimidate its rank-and-file participants, and not only the organizers."

"This is a Stalin-style trial," said Georgy Satarov, a former aide to late President Boris Yeltsin and the head of Russian think-tank INDEM. "This is revenge... It's an attempt to use fear to stop the growth of the protest movement."

Most of the defendants, who are being charged with attacking police or participating in mass disorder or both, are in their 20s and could face up to eight years in prison if convicted.

Ten were being tried from a glass-walled cage called an "aquarium," while the other two were on a bench. Their supporters chanted "We will win" as they entered Moscow's top city courtroom. The protesters have been under house arrest or in custody since they were detained in May 2012.

Opposition activists say the clashes that happened in Bolotnaya Square were the results of provocation by authorities, and that the central evidence being used to try the defendants is police testimony that is "extremely contradictory," Radio Free Europe reported.

"It is absolutely clear that everything has been decided ahead of time" to result in the protesters being jailed, said bestselling crime novelist Boris Akunin, who has spoken at several protests.