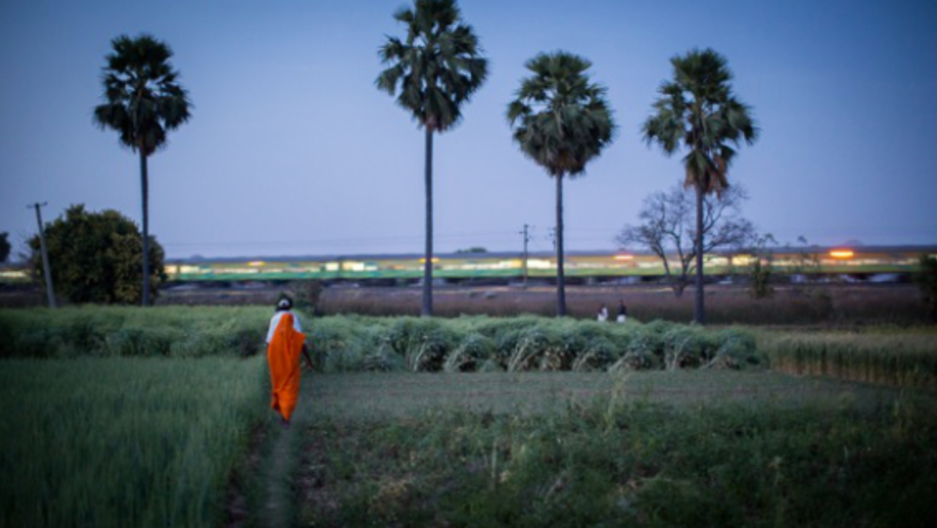 A woman walks into a rice field in northern India where farmers are using the technique known as Systems of Rice Intensification. Local officials claim the system recently produced a record rice harvest while using less fertilizer, water and seed.

In a poor region of northern India, a novel way of growing rice and other crops has quadrupled some yields while using less seed, water and fertilizer. The approach promises to be an important hedge against climate pressures, but some scientists doubt the reported gains are real.

In Bihar, India’s poorest state, a group of women in colorful saris sing a song about Sri.

“Sri,” is another name for the Hindu goddess of wealth, Lakshmi. But these women are all farmers and for them SRI has another meaning: System of Rice Intensification.

The song describes each of the simple steps involved in this novel way of growing rice and ends by describing how it’s transformed their lives.

Sako Dev, 45, says the SRI method has doubled and tripled her harvests of not only rice, but also wheat and vegetables. She says before she couldn’t grow enough food on her small plot to feed her seven children. But now she not only has enough food, she also has money to send her children to school.

So maybe that song really is about the goddess of wealth after all.

After the performance the women walk into their fields of wheat and Rapeseed, grown for cooking oil. Agronomist Anil Verma points out one of the telltale signs of SRI farming.

“You see how that, how these branching are coming up from one single seed?” Verma said. “You are getting this much.”

Each plant is about chest high, with multiple stalks, each heavy with seeds, signaling a bumper crop. Verma says one reason the plants are so productive is that they’re spaced farther apart than usual, to give each stalk more sunlight and room to grow.

If it was planted in the regular way, close together, how would these plants look different?

Other parts of the SRI system include better selection of seedlings, aerating and enriching the soil with organic compost, and using less water by keeping rice fields damp, but not flooded, so microorganisms can flourish near the roots.

A Jesuit priest in Madagascar developed the approach three decades ago. Since then, a vast network of grassroots promoters like Verma have been spreading the word, and an estimated 4 to 5 million farmers have adopted SRI worldwide. There’s an international SRI resource center at Cornell University.

And here in Bihar, the state government has endorsed the practice and set a short-term goal of 10 percent SRI production. Verma says there’s a good reason.

“The principles behind SRI is to get more with less. And that too, in a sustainable manner,” Verma said.

SRI, he says, uses only a fraction of the usual seeds, water and expensive synthetic fertilizer. Combined with its approach to cultivating deep, drought-tolerant root systems and moisture retaining soils, SRI is often touted as an answer to the triple challenges of climate change, declining soil quality and food security.

All of that while giving some farmers more yield per acre than even the biggest farms.

Sumant Kumar farms a few acres of land in one of Bihar’s more prosperous villages along the banks of the Sakri River. He’s a shy man in his 30s who recently became a local hero when he broke the world record for the highest rice yield ever recorded.

Sumant says he knew he was in for a good harvest, but he was shocked when the final tally came in: nine tons of rice per acre, nearly six-times the global average.

He says the lesson is when you give the plant what it wants and needs, more space, more light, more fertile, living soils, the sum becomes greater than the parts.

But that’s just what many scientists think SRI is — more magic than a legitimate breakthrough.

The International Rice Research Institute in the Philippines says Sumant’s harvest was more than twice the maximum possible yield for rice grown in the local climate. There are also influential doubters in Sumant’s own country.

“We were not involved so we cannot verify those yield,” said S.S. Singh, a lead scientist at the Bihar office of the Indian Council of Agricultural Research. “That is the fact.”

Sumant’s record was verified by the head of Bihar’s agriculture department. But Singh says when he went to Sumant’s village the next year, the highest SRI yields he could find were only about half of Sumant’s nine tons an acre. That’s roughly the same as rice grown with the latest conventional technologies.

“There is no significant differences between best management practices and SRI,” Singh said.

These may cost more, Singh says, but they’re also more adaptable to Bihar’s varied landscapes and cycles of droughts and floods. SRI, he says, may have its place, but it’s no silver bullet.

“One component in a particular situation. Not all components in all situations,” Singh said.

It’s a tool in his toolbox.

But in an arid part of Bihar, near the famous Buddhist temple, Bodh Gaya, farmers say SRI can mean the difference between eating and going hungry. Especially when drought is becoming more common with the changing climate.

Annu Devi says many in her village laughed when she switched to SRI. But during a recent drought she says her SRI rice, with its deep roots and spongy soils, stayed green while everyone else’s withered and died.

Devi says she’s growing more food than ever in a way that doesn’t cost anything other than her own hard work.

With an estimated half a billion small farmers growing most of the food consumed in the developing world, and in the same places that may suffer the worst effects of climate change and the highest rates of population growth, the breakthrough Annu is experiencing is potentially revolutionary.

As Verma, the SRI promoter, walks, she passes a group of women singing religious songs. Faith, Verma says, is part of the fabric of Indian life.

Some scientists see that emotional relationship to SRI as evidence that farmers embrace it more like a religion than a science.

But every farmer here extended an open invitation for skeptical scientists to come and see for themselves how SRI is not only working, it’s transforming lives.

“What’s for Lunch” is the latest chapter in "Food for 9 Billion,” a two-year project spearheaded by Homelands Productions and the Center for Investigative Reporting, and broadcast partners PBS NewsHour and American Public Media's Marketplace.