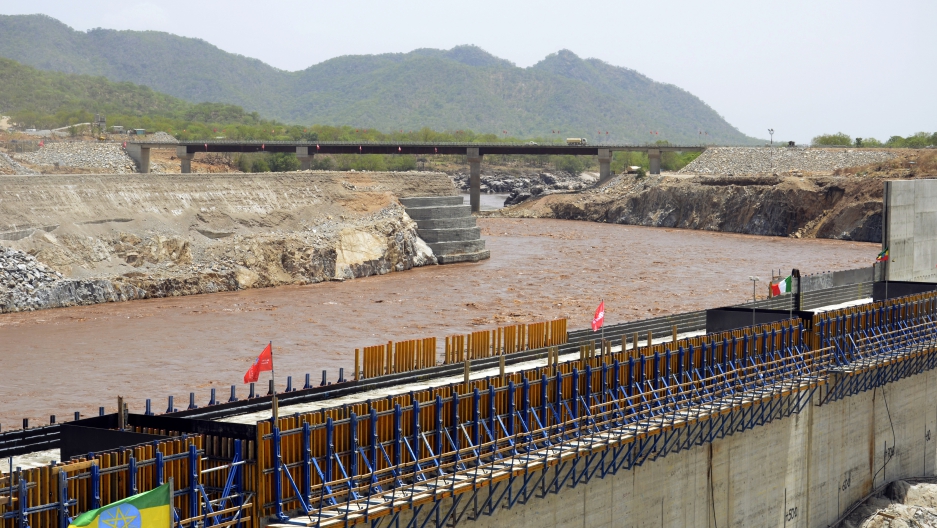 A picture taken on May 28, 2013 shows the Blue Nile in Guba, Ethiopia, during its diversion ceremony. Ethiopia has begun diverting the Blue Nile as part of a giant dam project, officials said on May 29, 2013 risking potential unease from downstream nations Sudan and Egypt. The $4.2 billion (3.2 billion euro) Grand Renaissance Dam hydroelectric project had to divert a short section of the river -- one of two major tributaries to the main Nile -- to allow the main dam wall to be built.
Credit: William Lloyd-George
Share

A Nile dam project has Ethiopia and Egypt butting heads, and has already led to a major gaffe by Egyptian President Mohamed Morsi that could threaten relations between the two nations.

The dispute stems from a plan to divert the Blue Nile by 550 yards off its natural course in order for Ethiopia to build a dam.

The Blue Nile is one of two tributaries of the Nile; Egypt and Sudan both sit upstream from it.

Ethiopia has denied that the shift will affect water levels in Egypt and Sudan, since they rely heavily on the river for their water supply.

"There is no problem with the river levels," said Addis Tadele, spokesman for the Ethiopian Electric Power Corporation (EEPCo).

Egypt and Sudan recently held meetings in Cairo to discuss the project, with the former opposing the project and the latter satisfied with guarantees from the Ethiopian government.

More from GlobalPost: Egypt warns not 'one drop' of Nile lost to Ethiopia dam

Egyptian politicians have also held what they thought to be secret meetings about the project.

However, a scandal emerged after Egyptian political heavyweights, not realizing they were live on-air, began discussing ways to sabotage the dam project.

He also criticized Sudan's perceived soft stance on the issue, reported the Telegraph.

Ethiopia condemned the threats and recalled its ambassador from Cairo Thursday.

Egypt stated that it believed that it had historic rights to the Nile from treaties signed in 1929 and 1959. It claimed the treaties gave it veto power over such grand water projects.

Ethiopia's $4.2 billion Grand Renaissance Dam hydroelectric project will be completed in several phases with the first being completed within three years.

When it is completed, the dam will have a capacity of 6,000 megawatts, officials say.