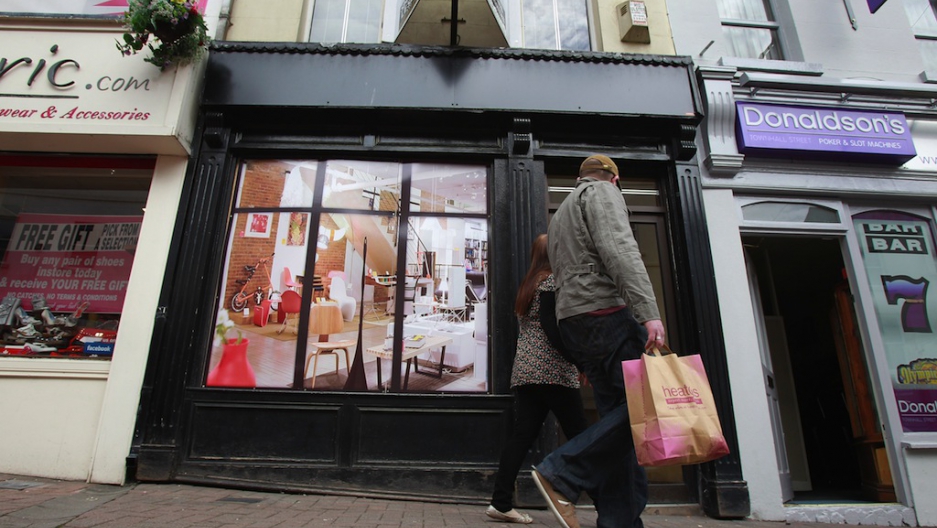 Pedestrians walk pass stickers applied to the windows of an empty shop in Enniskillen, Northern Ireland on June 1, 2013. The stickers give the premises the superficial appearance of a open business. More than 100 properties within range of the Lough Erne resort which hosts the G8 Summit have been tidied up, painted or power-hosed. Britain is hosting this year's summit on June 17-18. (PETER MUHLY/AFP/Getty Images)
Credit: PETER MUHLY
Share
#reactionDiv_gig_containerParent { display:none; }

Northern Ireland has, quite literally, put a band-aid on bigger problem.

Ahead of the 2013 G8 Summit, which is to be held in the historically conflict-riddled region later this month, N. Ireland's government has spent roughly £2m in an effort to battle the infrastructural dereliction that has plagued much of the region for years.

Some buildings have been demolished while others have been given striking yet superficial facelifts in an attempt to make the areas near Enniskillen, Northern Ireland — where G8 leaders will be staying during the summit — more aesthetically pleasing.

At a former butcher shop in the town of Belcoo, shown below, stickers showing a packed meat counter were applied to the windows, giving passersby a false impression that business is booming.

Across the street, another empty unit has been given a superficial makeover to look like a vibrant, well-stocked office supply shop.

“Northern Ireland is in the international spotlight so it is entirely right that we should portray it in the best light possible,” Northern Ireland Environment Minister Alex Attwood said in a statement.

“We should do everything we can to make these areas as attractive for residents, tourists and consumers. If we want tourists to visit and stay longer, then tackling major eyesores and dereliction will certainly help.”

Not surprisingly, the effort to simply mask the economic hardship that's being felt in these small towns and villages as opposed to actually fixing the problem, has not been warmly received by local townspeople.

One Belcoo local stated, "The shop fronts are cosmetic surgery for serious wounds. They are looking after the banks instead of saving good businesses."

"In six months' time how are these shops going to look?" said another. "They'll just be pieces of paper blowing around the ground."