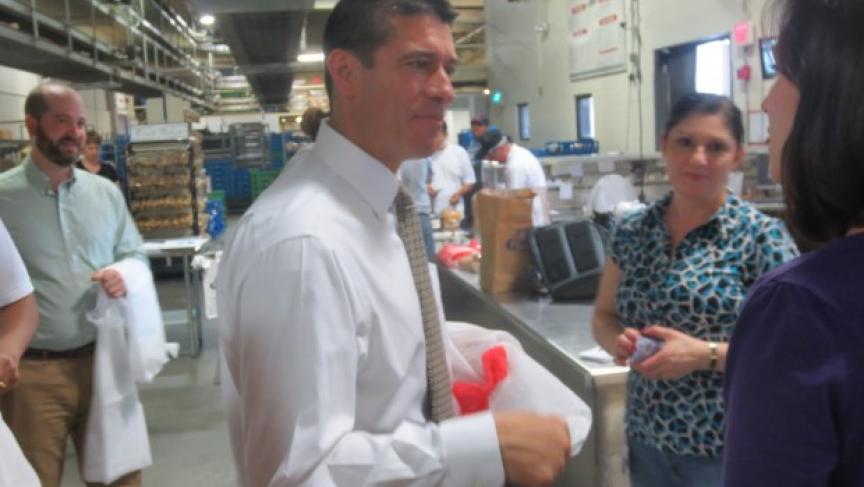 Gabriel Gomez on the campaign trail, inside a bread bakery in the city of Malden, just outside of Boston. (Photo: Jason Margolis)

Share
The Republican Party had a tough time with Latino voters last fall: President Obama captured some 75 percent of the Hispanic vote. Latinos flocked to the Democratic Party, in part, because of the Republican Party's tough stance on immigration reform. The Republican Party is now trying to re-brand itself with a softer stance on immigration reform and more Latino candidates. Their newest rising star is Gabriel Gomez. He's looking to fill John Kerry's vacant Senate seat in a special June 25th election. It's almost as if the Republican Party went to central casting and said, we need this guy… Gomez, the son of Colombian immigrants and Navy Seal, went on to earn an MBA from Harvard and become a self-made multimillionaire. But as with every good Hollywood character, Gomez has a tragic flaw: He's a Republican in a very blue state. Gomez wants voters to know though, he's no ordinary Republican. I met Gomez on the campaign trail at a bread bakery in the city of Malden, just outside of Boston. "You know I get asked all the time, whether I'm a conservative, a moderate, a liberal, whatever. And I just tell them, first off, I'm a Navy guy," said Gomez. Gomez breaks with many in his party on several key issues: He supports gay marriage, wants to address climate change, and generally backs the immigration reform bill currently in the Senate. "Obviously it starts with securing the border, you have to secure the border, and I think it's also good that we're going to have a pathway to citizenship, where we've got 12 million undocumented workers here, and quite frankly it's no longer just a moral issue, it's an economic issue." That position — supporting a pathway to citizenship — is something many Latinos nationwide wanted to hear from Republicans last fall. In Massachusetts, they didn't hear that from Senator Scott Brown. And that's one reason the state's 350,000 Latino voters shunned him last November, said Matt Barreto, a political scientist at The University of Washington and co-founder of the polling firm Latino Decisions. "Only 14 percent of Latinos voters supported Scott Brown in that Senate seat. And that was a critical factor for Elizabeth Warren winning that seat, that very, very large 86 percent support she got among Latino voters," said Barreto. Gomez is running against liberal Democrat Ed Markey, a 19-term Congressman from Malden. Markey isn't that well-known statewide. And in a special off-year election with very low voter turnout expected, the ingredients could be ripe for an upset. But is having the right sounding last name, and even the right stance on immigration reform, enough to sway Latino voters to the Republican Party in Massachusetts? "Will a few, when they close the curtain and see (the name), it's possible," said Alejandra St. Guillen, the executive of Oiste, a Latino civic engagement organization in Boston. "Just as when a Republican woman is running, maybe you'll have a few Democratic women who say it's just so important to have a woman in that position, you know, affinity votes do happen." But in the next breath St. Guillen said, the Republican Party has done a lot of damage to its brand with Latinos. Those wounds are still fresh and St. Guillen expects most Massachusetts Latinos, many who are in unions, to stick with the Democratic Party. She added, while immigration reform is important, for most Latinos the economy is still issue number one. "And it's very difficult to find, to know, what Gomez's positions are on fiscal policies," St. Guillen said. "He's fiscally conservative, but what does that mean? Would he cut entitlement reforms? What are the benefits he would protect for Massachusetts?" Gomez hasn't gotten much financial backing from the GOP at the national level, and not much campaign help either. Senator John McCain did come to a rally in Massachusetts and Senate Minority leader Mitch McConnell sent out a fundraising note for Gomez. But Matt Barreto says if the Republican Party wants to showcase Gomez down the road — win or lose this June — the party needs to do more for him now. "They can't come back to him a year from now during the midterms and say, 'Hey remember that guy Gomez? His name ended in a Z, he was a Latino, remember him?' They need to be involved now, they need to be going there showing that they support his candidacy and that's the person they want representing the Republican Party in the US Senate," Barreto said. "Then they can come back and use him and say, 'Hey, we helped you, now you now help us." But Gomez isn't exactly ingratiating himself with the GOP either. He says, if elected he'll be a "pain in the butt" for Republicans in Washington.