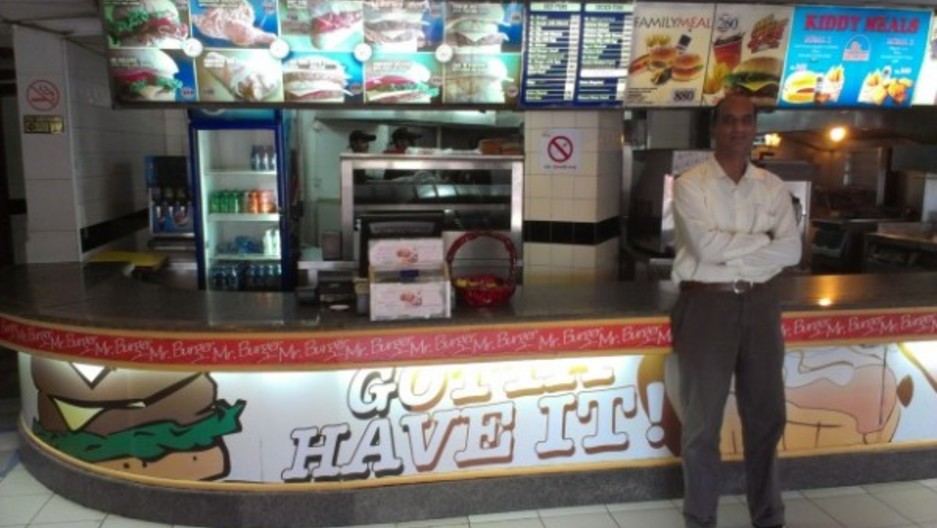 Where it all began: Mr. Burger in Karachi (Photo: Fahad Desmukh)

It may be hard to imagine, given the pervasiveness of McDonald's these days, but hamburgers were virtually unknown in Pakistan before 1981.

Arshad Jawad is the manager of Mr. Burger, the first fast-food chain in Pakistan.

"Believe it or not, a lot of people didn't know what cheese was. When we were putting a slice of cheese on the patty, they were looking at us asking like 'Is this plastic, is it rubber?'" Jawad said.

When Mr. Burger opened in Karachi, it initially got mixed reactions. It wasn't a big deal for people who had visited the West. But many would-be customers didn't know what hamburgers were, or how to eat them.

"After we made the burger people were asking, 'How do you eat this? We need a spoon, we need a plate.' So we had to educate them. We said 'Look, this is a wrapper. Grab the wrapper, open it gingerly and use that,'" he said, chuckling.

Back then, going out for a hamburger was a big deal, and many people can still recall their first, clandestine, date at a Mr. Burger.

It was only a matter of time before the fad caught on, and Mr. Burger was hot.

For many years, the average working or middle class Pakistani was unable to afford Mr. Burger. So the word "burgers" came to describe young, westernized urban elite, who studied at expensive schools, spoke English rather than Urdu and preferred eating burgers rather than local cuisine. They were derided for being out of touch with mainstream Pakistani society.

By some accounts, the term was first coined in a TV comedy called "Burger Family", about a rich Westernized family in Pakistan."

Today, there are lots of fast-food burger chains — local and international. But the word is still associated with the elite class in the local lingo.

And there's a rap song called "The Burgers of Karachi" recently put out by local group "Young Stunners".

They describe a typical Burger as someone who wears skinny jeans and Nikes, uses a smartphone, and holds a US Green Card.

One of the high school-age rappers, Talha Anjum, says a Burger is someone who wants to be someone they aren't.

"If you listen to Burger-e-Karachi, we're not making fun of people," Anjum said. "It's just a message that you should be real to yourself and real to the people around you. You shouldn't judge someone if they don't have a branded T-shirt."

Burgers may be ridiculed for trying to be something that they are not, but they have mobilized recently.

The urban elite have generally shunned politics in the past. But in last month's elections, they rallied around former cricket hero Imran Khan, using their access to wealth and the media to help his PTI party. It won the second highest number votes. Misbah Khalid, a member of the party's campaign team, says its not such a bad thing to have "burgers" on their side.

"Because now they are taking ownership of the country. Now people in every class as you say own Karachi, own Pakistan. So I think that's a great achievement, because you need people who have exposure to the outside world, who are maybe — what you say — the 'intellectuals,'" she said.

The spread of the term "burger" has sparked a counter-term: the "bun kebabs." Bun kebabs are cheap home-grown versions of hamburgers made with lentils. So a "bun kebabs" is a person who's a bumpkin compared to a burger.