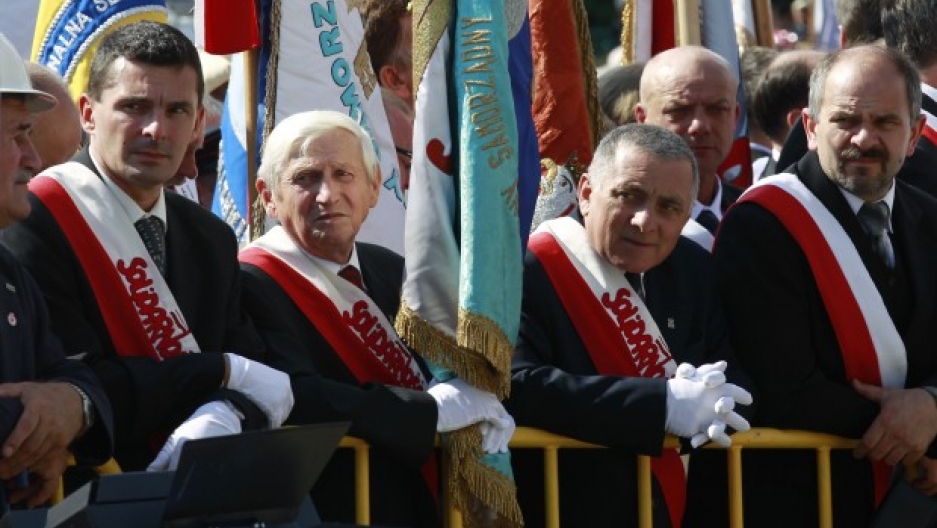 Solidarity activists attend a gathering celebrating the 30th anniversary of the Solidarity Movement in 2010. (Photo by Peter Andrews/Reuters.)

Ask young Polish citizens about their country’s communist era, and their eyes will likely glaze over.

It takes people of a certain age to remember Cold War terms like “Warsaw Pact,” the former Soviet-occupied alliance east of the iron curtain.

As Poland observes the anniversary of a significant milestone in its transition to democracy, the days of dismally long lines for commodities as basic as toilet paper seem very long ago. That’s just as well for a country about to mark its ninth year of membership in the European Union.

In the wider world, the mention of communism’s collapse in Eastern Europe usually evokes images of the Berlin Wall’s destruction. But it was an electoral upset staged by the Solidarity trade union five months earlier in Poland that set the revolutionary events of that year in motion.

In a defiant act that sealed the movement’s rise to power, Polish citizens hijacked the semi-free elections negotiated between Solidarity leaders and the communist regime. On June 4, 1989, voters across the country crossed off the names of every communist candidate on the ballot, triggering a constitutional crisis that ultimately swept the communists out of Parliament and the government.

“We achieved a lot,” mused Lech Wałęsa, the Nobel Peace laureate who led Solidariność, or solidarity, then the world’s biggest trade union, and later served as Poland’s first post-communist president. “But of course there is a price to be paid, and we have to pay it.”

One price to pay may be the risk of historical apathy as Poland’s younger generation sets its sights on future prosperity and living life very much in the present.

Walking past the chic boutiques and cafés near the pro-democracy think tank Wałęsa runs today, it’s hard to imagine the famously empty store shelves that defined this country only a quarter century ago. It’s even harder for Poles born afterward. That’s why an exhibit called “Roads to Freedom,” fittingly placed in the city known as the cradle of the Solidarity movement, was designed to make history more comprehensible to younger generations.

Inside a dark, converted bunker, film and sound montages of student arrests, shipyard strikes and the declaration of martial law take a visitor back to the 1970s and ‘80s on a visceral level. Jan Daniluk, a historian who was just five when the communists stepped aside, said he’s made at least 20 visits to the exhibit.

“I’m touched every time,” he said.

But he’s concerned that Polish youth might begin to take their democratic freedom for granted if they don’t know anything about the communist past. The exhibit is especially relevant in light of a debate over how the era should be remembered, he explained.

“Some people think we have to do something right now because there is a fight about our memory, our remembrance,” he said. In the politics of memory, he added, “there are lots of battlefields.”

Some Poles argue, for example, that it was a mistake for Solidarity, officially outlawed until April 1989, to have entered negotiations with the communist regime earlier that year.

While such debates are normal in any free society, the rehabilitation of Poland’s national memory is crucial, said Professor Grzegorz Berendt at the University of Gdańsk, because the country’s historical record was distorted and suppressed for years under communism.

“People who were fighting for freedom and democracy were forgotten for decades,” he explained, “which is the main reason to name heroes and victims first of all. But of course, there were also perpetrators who tortured them, humiliated them and eventually murdered them.”

Although many documents from the communist era have gone missing, it’s the task of the Institute of National Remembrance to set the record straight. Established by Parliament in 1998, it serves as custodian of Poland’s traumatic history under Nazi occupation and communist dictatorship. Among its tasks is vetting current political candidates to ensure transparency about any links to the communist regime. But Poles sometimes mistake this process for a witch-hunt, said Daniluk, the institute’s spokesman in Gdansk.

“Lots of journalists are coming to me and saying ‘you are hunting for witches again,’” he said.

But he insists that’s not the case.

“We don’t judge anyone. We just publish information to make some things clear. And when people are wise or calm, they will understand,” he said.

Getting younger Poles to care about this chapter of history is an even taller order. Elena, an English teacher who did not want to give her last name, thinks people shouldn’t lose too much time dwelling on history.

“Everything is changing for the better now,” she said, “so we have to broaden our horizons for the future, for the present.”

What matters most to her, she added, was her job and being with her friends.

“We can’t cry about all that was in the past,” she concluded.

Daniluk understands such attitudes, but he regrets that so few young Poles are interested in Poland’s recent, often dramatic history.

“It’s not about spies or some kind of crass tragedy,” he said. “So it’s not attractive at all.”

Depending on one’s definition, of course, others would find plenty of tragedy in Poland’s checkered history of foreign occupations. For Daniluk, a fascination with his country’s past is still a no-brainer.

“I’m curious, I want to develop,” he said with an air of urgency. “The beauty in the job of historian in our times is that we are able to connect with people from other continents, to hear lots of voices.”

Daniluk is well aware that the voices he appreciates at an academic conference are a far cry from the latest western pop hits most people his age would rather hear. He just hopes they realize that the comfortable lives they enjoy today have everything to do with what happened before they were born.