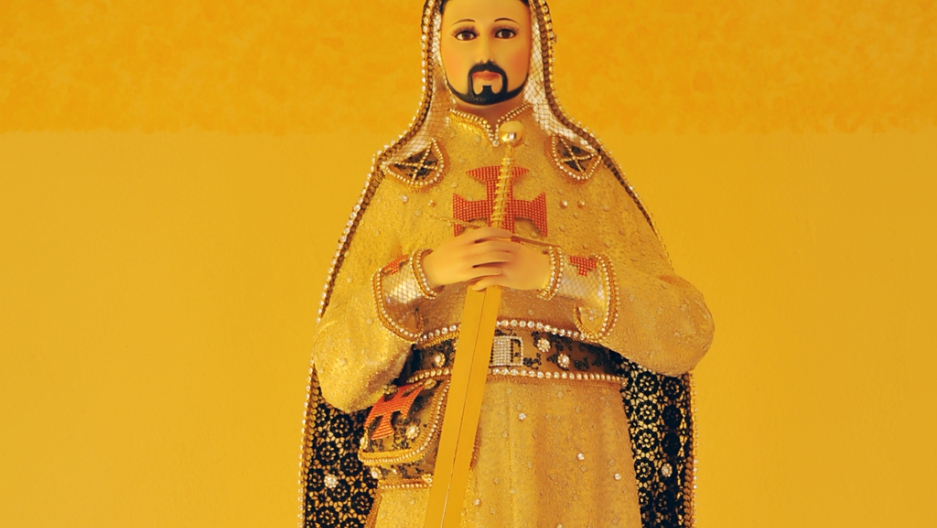 COALCOMAN, Mexico — A gang of self-dubbed knights claim they're on a crusade to protect the unprotected in Mexico's western state of Michoacan, but there's nothing cavalier about them.

Mexico's Caballeros Templarios, or Knights Templar, are menacing communities in the region with extortion, kidnapping, killing and an arson rampage, the authorities say.

They've also been fingered among Mexico's top smugglers of crystal meth to the United States.

Last week, President Barack Obama added the Knights Templar to the US government's list of narcotics "kingpins," designating it for economic sanctions and enhanced US law enforcement attention.

Taking their name from the famous Catholic order from the medieval Crusades, Mexico's Knights Templar started several years ago as a cult-like offshoot of the feuding La Familia Michoacana drug cartel.

La Familia kingpin Nazario Moreno was reported to have died in a gunfight with federal police, in December 2010.

Yet Moreno's body has never been recovered.

The cartel boss, known by the nicknames "El Chayo" and “El Mas Loco” — The Craziest One — is either still alive or a martyr worthy of sainthood, some Michoacan residents say.

After the disputed killing, several of The Craziest One's lieutenants, including schoolteacher Servando “La Tuta” Gomez, went on to form the Knights Templar.

They went to war with La Familia for control of the region, and the Knights proved victorious.

Though largely driven from Michoacan by the Templars, La Familia still operates local drug trafficking and extortion rackets in neighboring Mexico state, including the working-class suburbs of Mexico City.

Officials say both La Familia and the Knights Templar remain deeply involved in the drug trade, particularly methamphetamine production, as well as extortion and kidnapping.

Though they are not the first to present themselves as Robin Hoods, protecting local communities from outside gangsters and local petty criminals, perhaps none has done it with such panache.

In a raid police said they had seized helmets they suspected the gang used in initiation ceremonies.

The Associated Press photographed some of the gang's alleged paraphernalia.

Excerpts, collated by the AP, include:

"The members of the Order must fight against materialism, injustice and tyranny in the world.

"The Knights Templar will begin a challenging ideological battle to defend the values of a society based on ethics."

"A Templar soldier cannot be enslaved by sectarian beliefs or narrow-minded opinions ... a Templar must always seek the truth, because God is in the truth."

"I swear and promise to always seek to protect the oppressed, the widow and the orphan."

"The Order promotes patriotism, and the expression of pride in one's own land."

"That Knight who betrays the Templars will be punished with death, and all his properties will be confiscated, [and] his family will suffer the same fate."

"It is prohibited to abuse the innocence of chaste women, and minors, using power or trickery to seduce them."

"For the use of deadly force, the council's authorization is required."

"When a Knight ... breaks the vow of silence of the Knights Templar of the state of Michoacan, he will receive a death sentence."

Heads rolling on the dance floor

Their forebears La Familia first gained fame in Mexico in late 2006 when Familia members tossed the decapitated heads of six alleged members of the rival Zetas gangs on the dance floor of a Michoacan disco.

The incident shocked Mexico and helped spur then-President Felipe Calderon to dispatch troops to Michoacan upon taking office that December.

Empty coffins on the side of the road, commemorating the victims of fighting against drug cartels in the small town of Buenavista Tomatlan, in Michoacan state. Keith Dannemiller/GlobalPost

Last month, Knights Templar boss Gomez appeared in a nearly 20-minute video on YouTube claiming the current strife in Michoacan has been sparked by La Familia, allied with gangsters from neighboring Jalisco state, moving to take control and the federal government pitting the gangs against one another.

Both groups describe their extortion as “contributions” to help pay for protection from deadly cartels like the Zetas.

La Familia and Knights Templar both profess to be guided by religious tracts and a code of conduct written by Moreno, who reportedly converted to evangelical Christianity during a brief stay in the United States.

"Justice without power is empty, power without justice only generates violence," counsels a message on a shrine to Moreno, now destroyed by locals, at the highway entrance to Buenavista Tomatlan. "It's necessary to be strong to defend the most unprotected.”

While officials insist he's among the departed, most everyone in Michoacan speaks of Moreno, 43, in the present tense, convinced he walks among them still. He is said by many to have claimed the body of a son killed by a car accident in Morelia, Michoacan’s capital, last year.

Meanwhile, “San Nazario,” as Moreno is also called, has become a venerated figure in many parts of Michoacan, particularly the sweat-drenched coastal foothills and plains known as the Hot Land that include Coalcoman and its neighbors.

Devotees, including the Templars’ estimated 700 gunmen, worship statues of Moreno clad as a Crusader knight, erect shrines to him on roadsides and in homes, absorb his writings.

“He has made himself into a God," says an intelligence analyst in Michoacan's capital, Morelia, who advises state and federal governments and is among the many who believe Moreno is alive. "People view him as a saint."