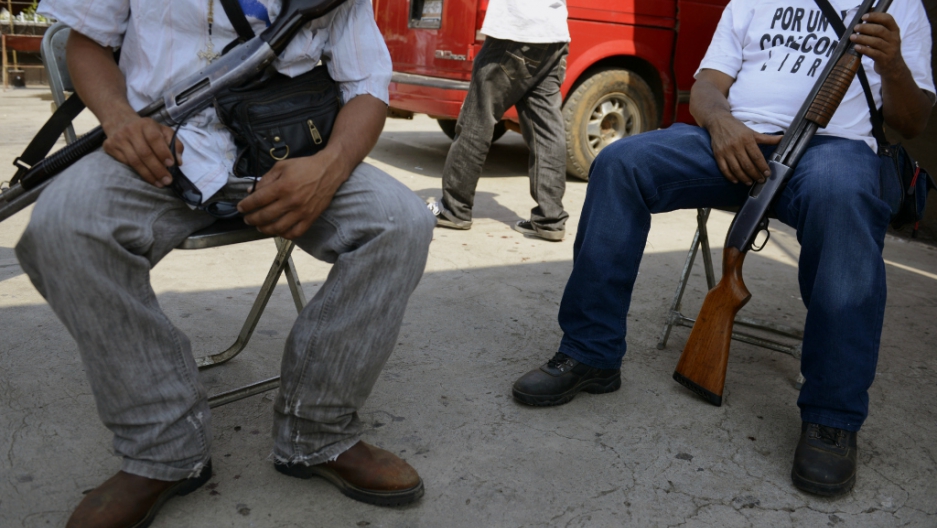 COALCOMAN, Mexico — From a desk overlooking the shady plaza of his backwater mountain town, Mayor Rafael Garcia recounts how he and other citizens finally mustered the nerve to take on the gangsters tormenting them.

“The problem started when they began messing with the population: extortion, rapes, killings," Garcia, 42, says of the Knights Templar, the fancifully named cartel of thugs who control many of western Michoacan state's 113 counties. "We were terrified. We are still terrified.”

“We are a very small town raising its voice,” he says. “Hopefully it will have an impact.”

Map of Mexico, with Michoacan state in black.
Wikimedia Commons

Following the lead of two nearby counties, Coalcoman's people two weeks ago armed a makeshift militia with assault rifles and shotguns and drove the Templars out.

The gangsters responded by besieging the town from its outskirts. They set fire to trucks and cars trying to leave and attacked men working the forests and ranches.

Wielding a quasi-religious code of conduct and a cynical vow to defend communities against outsiders, the Templars are Michoacan's latest incarnation of a deeply rooted and politically protected criminal culture.

The state has produced export-grade opium and marijuana for more than a century, churned out methamphetamine in recent times, and served as a key smuggling route for South American cocaine.

But this latest threat of impending slaughter proved a watershed, forcing President Enrique Peña Nieto to backtrack on vows to demilitarize Mexico's fight against its heavily armed and murder-minded gangsters.

He named an army general on May 16 to take control of Michoacan's public security and deployed as many as 6,000 soldiers to the state with orders to disarm the militias and force the Templars to retreat.

“I still don't understand how the government let this go on so long," Garcia says. "They didn't imagine the town would take up arms. The army is here because the people rose up."

Coalcoman joins a spreading movement across violence-plagued Michoacan and neighboring Guerrero state, where towns and villages have formed volunteer “community police” to depose corrupt local police and draw a line in the dirt against the gangs.

Similar but more poorly armed militias formed in late February in the towns of Buenavista Tomatlan and Tepalcatepec, forcing the mayors of both towns to flee and sparked deadly clashes with the Templars.

"It's not possible to continue living this way," Michoacan's five Roman Catholic bishops declared in a call to action two weeks ago. "There is a permanent feeling of defenselessness and desperation. To that is added anger and fear because of the forced or voluntary complicity between authorities and organized crime."

The troops didn't stay long and the gangsters waited them out, returning stronger than ever. By one estimate, the Templars — who emerged several years ago as a breakaway faction of La Familia — now hold sway in nearly three-quarters of the state's counties.

The Knights Templar has become the state’s leading crime syndicate.

As long as they stuck with the drug trade the Templars were tolerated and even admired by many here. But in recent years the gang's local cells began heavily extorting communities and business people, reportedly raping women at will and killing on a whim.

Local officials and police either cooperated openly with the Templars or felt themselves powerless to oppose them. State and federal officials reacted sporadically, their operations often sparking open combat and gangsters blockading towns and cities.

Extortion fees were collected as taxes, just as formalized but far more hazardous to evade, the Coalcoman mayor and other residents say. The Templars took 10 percent of municipal budgets, and similar cuts from cattle, lumber and lime producers. They levied taxes on meat, tortillas and other groceries and charged “protection quotas” from anybody they came across.

Residents and companies refusing to pay face the Templars’ wrath.

The charred remains of a tractor trailer truck sit on the side of the road outside Coalcoman, in Mexico's Michoacan state that's battling the Knights Templar cartel. Keith Dannemiller/GlobalPost

Lumber yards, and fruit packing sheds and delivery trucks have been burned down, workers and citizens murdered. In April, gunmen twice attacked a convoy of lime growers and pickers who had traveled to complain to state officials about the extortion, killing 10 people.

For now the troops serve as peacekeepers, keeping Templars and militias separated but not really moving against either. The gangsters stay scarce, the militias keep their weapons out of sight but handy.

Most everyone expects the federal forces to pull out sooner rather than later. Then the troubles will begin anew.

"We are very aware that they can return at any time,” said the leader of unarmed militiamen manning the checkpoint on the highway entrance to Buenavista Tomatlan. “We know lives will be lost, but we are ready for that. The people don't want any more gangsters in this area."

The Templars and some federal officials have accused the militias of taking weapons and other support from a criminal cartel in neighboring Jalisco state, pointing to the assault weapons carried by many of the volunteers.

But Mayor Garcia in Coalcoman says local businessmen bought the weapons, though he won't say from whom.

"How are you going to fight these people, with slingshots?" Garcia asked in an interview Tuesday.

A sprawling county of just 10,000 souls, Coalcoman huddles near the Pacific coast in a valley surrounded by forested mountains a six-hour drive from Morelia, the state capital.

The area's independent-minded people work mines, cattle ranches and lumber mills. Coalcoman’s people long have had little use, or regard, for state and federal government.

Coalcoman earned a footnote in history for its fierce guerrilla resistance against occupying French soldiers in the mid-19th century.

A leftist guerrilla movement sprang up near here in the 1970s. Well-armed militias here again have set nerves on edge in Morelia and Mexico City.

“We are living this, we are fighting this in perhaps an old fashioned way," said rancher Misael Gonzalez, 48, a leader of Coalcoman's community police. "We are a grain of rice, but we are doing what we can."

Things are peaceful for now. Hundreds of soldiers and federal police man checkpoints on the highway leading to Coalcoman through Buenavista and Tepalcatepec. Armored troop convoys are about the only traffic on the road. Two propeller driven air force attack planes overflew the area last week in a show of force.

“Our fear is that days and months will pass and they will be here without finishing off the Templars," Mayor Garcia says of the troops.

Meanwhile Garcia and his townspeople hunker down. The mayor says he sleeps in different houses every night, and doesn't dare leave town.

Should the Templars return, he says half jokingly, he might be forced to seek asylum in the United States. But Garcia stresses that he has few regrets about leading his town in confronting the gangsters.

"It's not about money any more. We were used to paying money,” he says of the Templars endemic extortion. “This is about honor and dignity.

“Either you serve God or you serve the Devil," Garcia says. "I am with the people.”