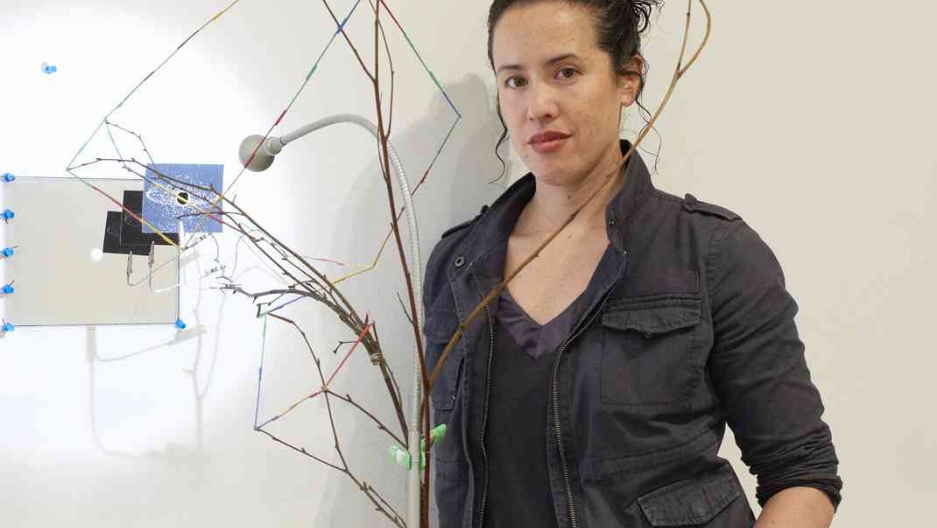 Sarah Sze will represent the United States in the Venice Biennale. (Photo by Suki Dhanda.)

The Venice Biennale is like the Olympics of the contemporary art world.

Every two years, countries around the world send their best and brightest to an art fair that nearly takes over Venice. The list of artists chosen to represent the United States at Venice is a lesson in American art history: Edward Hopper (1930), Willem de Kooning (1950), Robert Rauschenberg (1964), Diane Arbus (1972) and Ed Ruscha (2005).

This year the honor belongs to the installation artist Sarah Sze, who builds intricate gravity-defying structures that take over the spaces they inhabit. They've been described as sculptural maelstroms.

As strange and fantastical as they look, the materials seem like stuff Sze picked up at the dollar store — birthday candles, aspirin, light bulbs and cheap shelving.

Sze says when she started studying sculpture, she thought a lot about how people assign value to the things around them.

“That sweater you’re wearing, how do you feel like that’s your sweater, when you know hundreds of people have the same sweater?,” she asked, rhetorically. “What objects in your life have value and how is value created? So one of the things that I want to do in my work is to show objects that we know we’ve seen in our bag or on a shelf in a store, but for some reason in that location they have the residue of emotion."

She’s not at all put off when people tuck bits of junk from their pockets into her pieces.

“A bus ticket, a paper clip, a piece of gum. Like when you go to a Japanese shrine and people leave a little note — it’s so wrong in a museum that I think it’s interesting,” she added.

Sze's installation in Venice will snake throughout the U.S. pavilion in surprising ways. It’s a Neoclassical building, but her plan has visitors enter through the emergency exits rather than the grand entrance.

“I want to it to be about exploring the nooks and crannies of the building so you find the artwork rather than having it presented to you,” she said.

This particular exhibit seems ambitious, even for her large-scale works.

“It’s the American Pavilion,” Sze said. “You’ve got to give it all you’ve got.”