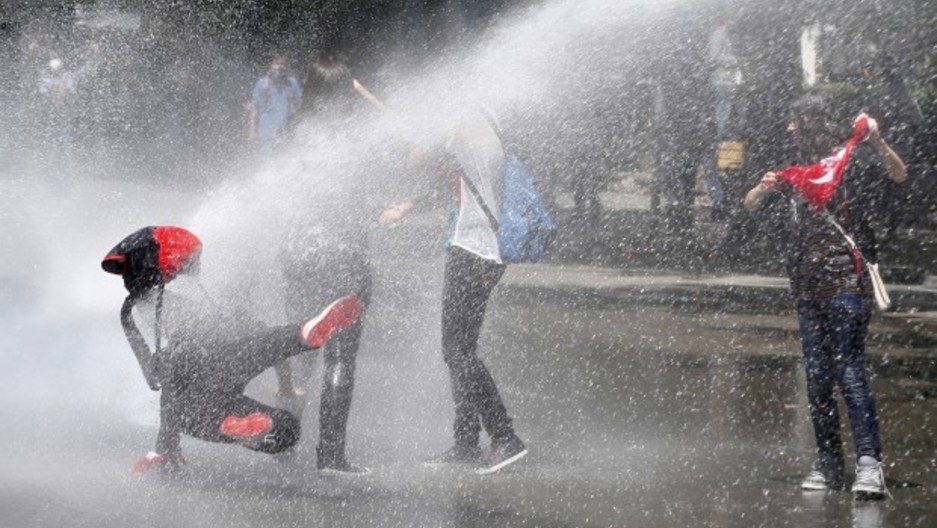 Police use a water cannon against protesters during a demonstration in Ankara June 3, 2013. Turkish Prime Minister Tayyip Erdogan accused anti-government protesters on Monday of walking "arm-in-arm with terrorism", remarks that could further inflame public anger after three days of some of the most violent riots in decades. Hundreds of police and protesters have been injured since Friday in the riots, which began with a demonstration to halt construction in a park in an Istanbul square and grew into mass protests against what opponents call Erdogan's authoritarianism. REUTERS/Umit Bektas (TURKEY - Tags: POLITICS CIVIL UNREST TPX IMAGES OF THE DAY) - RTX10A9Z

Share
Protesters in Turkey's capital Ankara clashed with riot police on Monday. Police there responded with tear gas and water cannons. This was the fourth day in a row that protesters have vented their frustration against Prime Minister Recep Tayyip Erdogan. They accuse him of running an increasingly authoritarian government. Anchor Marco Werman speaks with journalist Dalia Mortada about the daily protests.