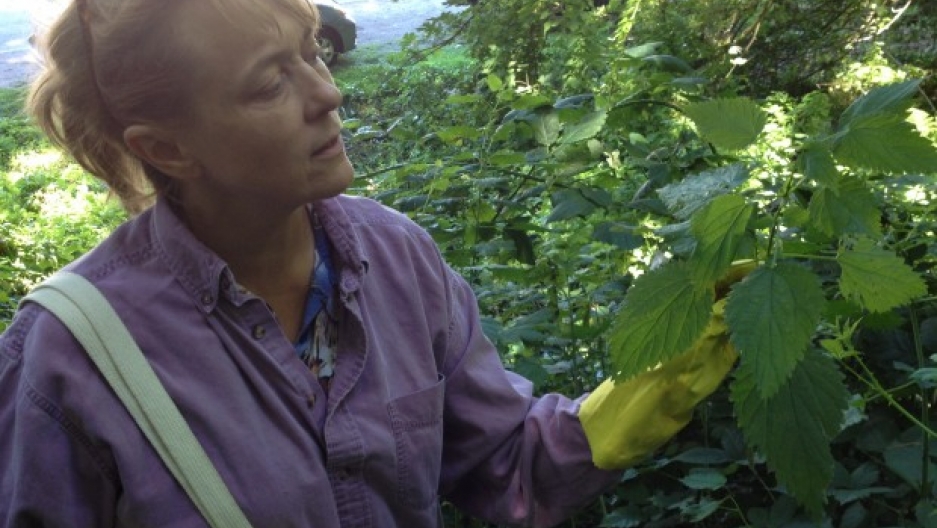 Efforts to make better use of food resources growing within the city are taking root in Seattle. It's part of a movement to bring urban foraging from the margins to the mainstream as a hedge against food insecurity and climate change.

Melany Vorass Herrera is about to break the law.

We’re in a neglected corner of the city’s Golden Gardens Park. The forest floor is littered with beer cans. People pass through here on their way to the beach, just down the hill. But nobody stops here.

Nobody except Herrera. And she’s after something that almost nobody else would want.

Every kid who ever went to summer camp around here has a story about falling into a patch of stinging nettles. Herrera’s getting stung right through her rubber kitchen gloves. But she says stinging nettles are worth suffering for. They’re free. They’re super-healthy. And once you get them back into the kitchen, nettles make a great pesto.

Foragers like Herrera have always operated in cities, but on the fringes. Sometimes, they’re even seen as vandals.

Melissa Poe, an environmental anthropologist who has studied urban foragers says we usually think of parks only as places for recreation.

“We go there for picnicking,” Poe says, “we might ride a bicycle or we might just enjoy a walk. Generally speaking, public properties aren’t considered areas that are ripe for foraging.”

But Poe says attitudes are changing.

Los Angeles recently affirmed the right to harvest fruit on public land. Boston, Chicago, and Baltimore have planted public orchards. And foragers have played an important role in restoring a forest just outside Tokyo.

They’re all part of a shift in cities toward preparing for a more uncertain future. Climate change, extreme weather events, rising fuel prices, terrorist activity—they all threaten to disrupt the flow of food into urban areas.

Poe recalls that Seattle just had to cut off a major interstate to Canada, an important corridor for moving the region’s food, for two weeks. And that was just from a truck accident.

So many local leaders are looking to local resources to increase the resilience of their food supply.

That means things like more urban gardens and farms, allowing chickens and small livestock back into the city limits, and foraging.

And it’s not just wild plants.

On a quiet street in Seattle’s Mt. Baker neighborhood, Gail Savina of the organization City Fruit stands under a large tree and points upwards.

“See right up there against the sky?” she asks. “Those are all figs.”

The tree’s owners are at work and don’t have time to harvest this fruit. And they’re not alone.

Savina estimates there are 100,000 pounds of unharvested fruit on private and public land in Seattle. Last year, City Fruit picked about a fifth of that—figs, plums, apples, cherries and pears. The fruit went to local food banks.

Walk around the block with a forager and the city starts to look like a grocery store. Lawns are spotted with salad greens, from fiery wild mustards to sweet first-year dandelion greens. A mysterious mushroom in a backyard turns out to be edible – and highly prized. Young horsetail and bamboo shoots. Invasive garden snails descended from French escargot.

Even squirrels are fair game for some foragers.

And foraging isn’t an isolated activity anymore – it’s a communal activity. Many in Seattle’s Southeast Asian communities gather each fall to collect Chestnuts from Queen Anne Boulevard’s stately street trees. And a wildly enthusiastic group has planted a new food forest on public land in the city’s Beacon Hill neighborhood.

Still, the concern about environmental damage from foraging hasn’t gone away. It remains illegal on much city property. And for good reason, says Seattle parks spokesperson Dewey Potter.

“We’re engaged in a multimillion dollar effort to restore 2500 acres of urban forest by the year 2025,” Potter says. “And a tremendous amount of that effort in that situation is done by volunteers. And we had a situation where a newly restored area was stripped bare of its native plants by people foraging.”

But Seattle’s response to a few bad experiences like that has been to engage foragers, not crack down on them.

City departments have all been asked to take a look at their policies and consider ways to allow food harvesting and even production on public land. Now in some Seattle parks, Potter says rangers not only tolerate foraging, they actually teach foraging classes.

“Because the more people understand about how the ecosystems work, the more respectful they will be of our parks.”

The idea is that educated foragers can help protect urban land. Groups like City Fruit help bring a level of stewardship to the trees they harvest from. And anthropologist Melissa Poe says most foragers end up returning to the same spots again and again, places where they know the entire plant population and what’s valuable to them.

“And so they end up tending these areas,“ Poe says.

For her part, forager Melany Vorass Herrera is careful not to overharvest her favorite nettle patch.

In her kitchen, Herrera stuffs her stinging nettle pesto into the bellies of trout her husband Carlos caught in a nearby lake.

Unlike some here in Seattle, Herrera is no newcomer to foraging. Over dinner, she talks about how she and the rest of her family had to forage for food when she was a kid, and how it had embarrassed her, because it revealed their poverty. But she’s rediscovered it as an adult.

Now, like Melany, many cities are also giving foraging a second look. And the result can be good for the climate… good for the cities… and delicious.

Joshua McNichols is a producer for KUOW Presents and the author of The Urban Farm Handbook.