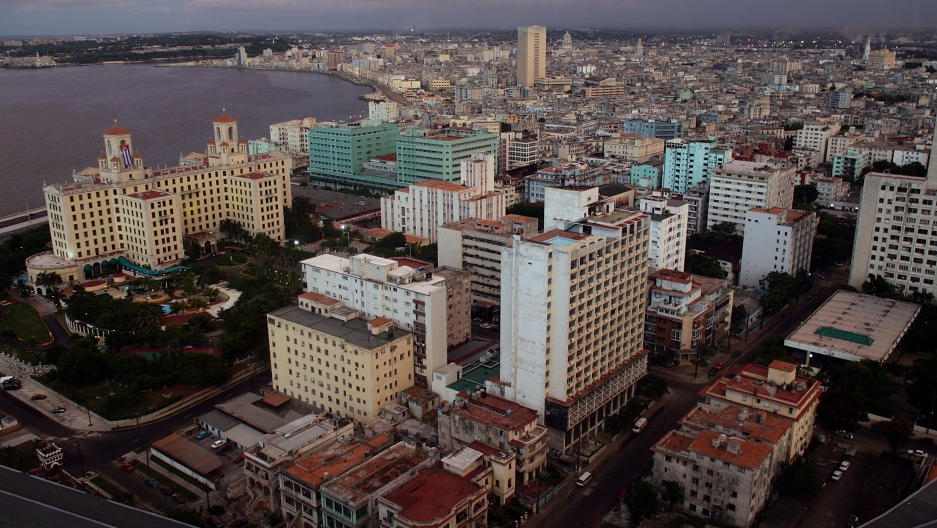 Editor's note: This spring, Boston University journalism and photography students made a weeklong trip to Cuba. By special arrangement, GlobalPost is presenting six stories that emerged from their trip. The introductory piece is by Stephen Kinzer, the former New York Times foreign correspondent who was the students' journalism professor. The five that follow were written by his students. Photos were taken by students working under the guidance of prize-winning photographer Essdras Suarez.

CARDENAS, Cuba — A specter is haunting Cuba: the specter of prosperity. This terrifies Cuban leaders.

“Prosperity” has an appealing sound. Many ordinary Cubans, especially the young, yearn for it. Their Communist leaders have responded with reforms that now give them more chance for material self-improvement than they have known in decades.

The change is astonishing. Streets are lined with private businesses, ranging from shops and cafes to computer schools to yoga and aerobics studios. Along highways, vendors hawk fish and vegetables. This would have been unthinkable a few years ago.

Few Cubans are happy with the change, though. Many think it is far too limited. Regulations still make it difficult for them to hire employees and buy supplies. Businesses must stay small; people call them “bonsai businesses” after the Asian plants that never grow beyond miniature size.

This frustrates the remarkable number of Cubans who are eager to become entrepreneurs. They wish the government would cast aside its fears and liberate the economy.

More by BU: Legend of the Cuban cigar

“Something in the minds of our leaders makes them hate the thought that someone might get rich,” observed the barber who shaved me in the provincial town of Cardenas.

He was right, but the regime’s fears are understandable.

Senior Cuban leaders, symbolized by Fidel and Raul Castro, were forged in the crucible of Marxist ideology and spent their lives considering capitalism a cruel enemy of humanity. They rebelled against social inequality as young men, saw the suffering that enveloped many capitalist countries in Latin America, and were appalled by the emergence of rapacious oligarchy in Russia after privatization in the 1990s.

Almost literally on the back of their necks, they feel the eager breath of what some call the “Miami mafia,” wealthy Cuban Americans who dream that investing in Cuban businesses could be their path to power in their ancestral homeland.

Legalizing larger-scale private business in Cuba would have profound political consequences. It would lead to the emergence of a middle class, and eventually a wealthy class. Such classes always seek to transform their economic power into political power. Cuban leaders are acutely aware that an open economy could be the greatest long-term threat to their revolutionary order.

This makes the US trade embargo on Cuba even more self-defeating than it has been for the last half-century. It is among the most bizarre American foreign policies. No other country in the world has cut itself off from Cuba. Lifting the embargo would hasten the kind of change most Americans — and most Cubans — would like to see in Cuba. Paralyzed by fear of the Cuban vote in Florida, however, generations of American politicians have refused to take this eminently logical step.

In today’s Cuba, life is shaped by access to hard currency. This has led to a ludicrous distortion of the social order. A surgeon, who by the nature of his profession may work only for the state, is paid in Cuban pesos and earns the equivalent of $30 per month. A waiter in a tourist restaurant, paid in hard currency, can earn that in a day. So can performers who dress up in garish caricature of old Cuban dancers and, for a fee, allow themselves to be photographed kissing tipsy tourists in the colonial plazas of Old Havana.

Some Cuban parents, I was told, now discourage their children from pursuing a profession like medicine or engineering because there is no money in it. Bartenders live better. “Our pyramid is inverted,” one man told me.

Access to hard currency has made Cardenas, on Cuba’s north coast, one of the island’s most prosperous towns. Its wealth comes from two sources. Many local people work in one of the 50 hotels that comprise the nearby tourist enclave at Varadero Beach, and bring home tips that place them among the country’s highest earners. In addition, the town’s location has tempted many local people to risk the boat or raft trip to Florida, and those who have made it send dollars back to their relatives.

Yet this is a sobering kind of prosperity. Nearly every building in Cardenas is somewhere between deteriorating and collapsed. The pace of life is languid to the point of lassitude. As in the rest of Cuba, all children attend school, are clothed, and eat reasonably well, and there is no acute poverty — an irrefutable achievement. Yet Cardenas reflects the poverty of hope and opportunity that grips much of Cuba today.

Strolling along the town’s main street, Calle Real, I stopped to chat with a young man named Alexei who was sitting at a makeshift table in front of his bedroom window. A sign said he could repair and unblock cellphones.

“I’m an engineer,” he told me. “After I finished school, I did my two years of social service at a radio plant. Now I’d like to keep working as an engineer. It’s humiliating to work fixing cellphones, but this is the way to earn money. I have to think of my family.”

I asked Alexei when he thought true change would come to Cuba. “Medium term — 10 to 15 years,” he estimated. Another Cuban, also around 30, told me, “five years.”

Alexei is forbidden to open a second shop, or to hire more than one employee. This is supposed to prevent Cuba’s new reforms from burgeoning into full-fledged capitalism. In the same vein, it is now legal for Cubans to buy and sell cars — but no one may open a lot at which cars would be bought and sold in volume, since that crosses the line into “big” or “exploitative” business.

Cubans do not appear to be in an angry or pre-revolutionary state. Many seem complacent, submissive, or resigned. They are used to hard times.

Even their frustration at the limits of Cuban life has not blinded them to the successes of their society. A young novelist who is a sharp social critic told me after returning from a trip to France: “I saw some very tough things, like people living in the street, and it made me think.”

The expanding definition of what is tolerable in economic life has its counterpart in a remarkable opening of the Cuban mind. Never in the last half century has world culture crashed so fully into Cuba.

Gay life is flourishing. So is hip-hop culture. Kids play paintball. There are cutting-edge Cuban tattoo artists, surfers, and installation artists. Soccer is emerging to challenge baseball. The Union Jack is a fashion icon. In Havana, crowds of hip young things congregate on weekend evenings along the central blocks of 23rd Street, gravitating into groups of “rockers” and “emos.”

Cuba is settling into the pattern that will shape its national life for the next few years. Private business will continue to flourish, but only at a low level. Government will accommodate the public demand for change to the minimum extent possible. The seeds of longer-term change are being sown.

“This country is becoming more diverse and heterogeneous every day,” Roberto Zurbano, a dreadlocked Cuban intellectual, told me at his book-lined office near the Havana waterfront. “There is a closer identification between social discourse and government discourse. We’re moving toward a single society with a coherent social and economic project. Our challenge is to find a way to steer a socialist ship in a capitalist sea.”

It is a noble but daunting challenge. Strong forces, many born of legitimate fears, hold Cuba back. A young man in the provincial capital of Matanzas explained this to me indirectly but vividly.

“See that fishbowl?” he asked when I dropped into his office. “Those two goldfish are more than 50 years old.” I told him that sounded unlikely.

“Resisten y resisten,” he assured me. “They go on and on.”

Slow to get the joke, I told him I still doubted it.

“Their names,” he said with a wry smile, “are Fidel and Raul.”