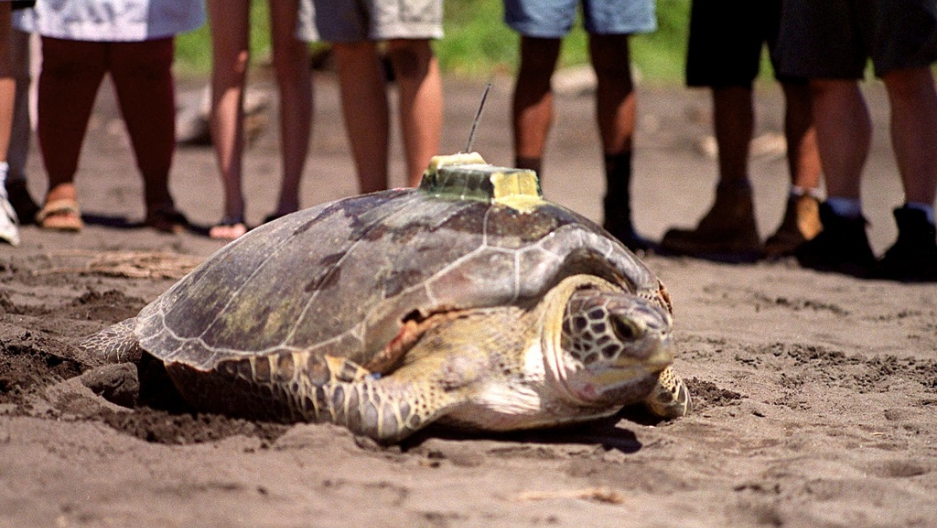 A green turtle (Chelonia Mydas) enters the sea, 20 July 2000, with a transmitter placed in its shell at the biologicaL station of the Caribbean Conservation Corporation located at Tortuguero beach.
Credit: TERESITA CHAVARRIA
Share

People who poach animals for a living don't seem to care that they wreak havoc on the wildlife population. But now, some animal poachers in Costa Rica have taken it a vicious step further: they killed a human.

Jairo Mora, an environmentalist that had campaigned for the protection of endangered sea turtles in Costa Rica, was found dead with his hands tied behind his back. He was 26.

Mora worked at a sanctuary for sea turtles. Before he was killed, he had gone on patrol with other volunteers. It was then that they were attacked by armed men.

Didiher Chacón, the Costa Rica coordinator for the Wider Caribbean Sea Turtle Conservation Network (WIDECAST), told the Tico Times that Jairo was kidnapped with four other volunteers during their beach patrol. Jairo was beaten and tortured, dying from a blow to the head.

More from GlobalPost: Into the Costa Rican wild: Jaguars feast on sea turtles

"It was him they wanted, because he was the one who was always looking after the nests," the owner of the turtle sanctuary, Vanessa Lizano, told BBC News.

Poachers make money by stealing turtle eggs from their buried nests and selling the eggs. Smugglers can make as much as $300 a day. But stealing the eggs is "one of the gravest threats" the species faces, according to the activist group Sea Turtle Restoration Project.

A month before he died, a reporter from local paper La Nacion had accompanied him and Vanessa on one of their patrols. According to the paper, Jairo spoke about "the frustration of feeling alone, unprotected, in this unequal fight to save the leatherback turtle."