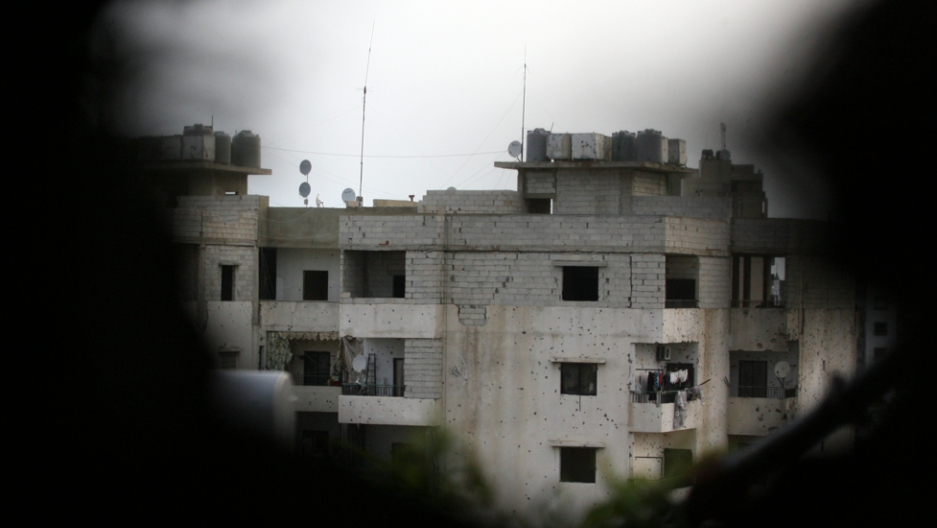 A damaged building is seen through a hole in a wall in the Sunni district of Bab al-Tabbaneh following clashes with the Alawite neighbourhood of Jabal Mohsen in the Lebanese port city of Tripoli.
Credit: GHASSAN SWEIDAN
Share

BEIRUT, Lebanon — Much like downtown Beirut, the skyline in this city’s southern reaches, where the militant group Hezbollah is strong, is dotted with new apartment blocks built atop the ruins of past wars.

But with the conflict in Syria grinding next door, less than 40 miles to the east, south Beirut could again be at the epicenter of another armed conflict in Lebanon. The Western-backed leader of the Free Syrian Army, Gen. Selim Idriss, this week issued a deadline for Hezbollah to leave Syria or face attacks on its home turf.

In a televised speech Sunday, Hezbollah leader Sayyed Hassan Nasrallah said the group would fight alongside the Syrian regime, one of its primary backers, “until the end.” Hours later, two rockets crashed into the outskirts of the group's traditional powerbase in south Beirut, injuring several people.

Hezbollah — a powerful Lebanese Shia militant and political group — has thrown its weight behind Syrian President Bashar al-Assad, putting an already fragile Lebanon in the crosshairs of a spiraling regional conflict.

Hezbollah fighters are suffering losses in battles inside Syria, sectarian rhetoric is on the rise in Lebanon, and Israel has said it is willing to carry-out more strikes on Syrian soil to keep advanced weapons from reaching Hezbollah.

In a taped interview on Hezbollah's television station Al-Manar, Assad said on Thursday that Russia had delivered the first shipment of the sophisticated S-300 surface-to-air missile system. Israel has previously said it would again strike targets in Syria if the regime acquires them.

"We are worried that the war in Syria is coming to Lebanon," said Ibrahim, a resident of the Hezbollah stronghold, Dahiyeh, in Beirut’s sprawling southern reaches. Many of the young men that fill Hezbollah’s ranks come from this area.

"But more than that,” Ibrahim, a staunch Hezbollah supporter, said, “the young people around here are angry and want to fight.”

The deadly civil war in Syria, which kicked-off as a popular uprising but quickly morphed into an armed conflict, is now entering its third year. With some 80,000 dead, the conflict has managed to ensnare a number of outside players, including Russia, Iran, Israel and Turkey. Even the United States has stepped up its support for Syria’s rebels.

For now, Lebanon has managed to avoid being fully dragged into its neighbor's increasingly sectarian war, which pits the largely Sunni opposition against a government dominated by members of the Alawite sect, an offshoot of Shia Islam.

But this small Mediterranean nation, which lived under Syrian occupation for 30 years and has battled its own sectarian wars, perhaps has the most to lose in the fight.

Funerals for Hezbollah fighters slain inside Syria are now occurring with greater frequency across southern Lebanon and the Bekaa Valley, two areas from which the group has long drawn its support. Meanwhile, an untold number of young Sunni Muslim Lebanese men are fighting and dying alongside their rebel allies in Syria.

"All of the young men here want to go to Qusayr where their brothers are battling the jihadists," Ibrahim said.

The city of Qusayr, just miles from the Lebanese border, is a crucial link between Damascus and the Syrian regime's heartland on the coast. Hezbollah and Lebanese Shiite militias are fighting alongside the Syrian army as it tries to retake the town from rebels.

He added that "thousands" of young men from the area are volunteering to fight in what Hezbollah frames as an Israeli-Western-Gulf Arab alliance seeking the downfall of Assad, one of the group's primary backers.

In northern Lebanon, another outbreak of sectarian bloodletting recently brought the city of Tripoli to a standstill for nearly a week, with 25 killed. Hundreds have been killed or injured there in the past two years in fighting between pro-rebel Sunnis and Lebanese Alawites loyal to the Assad regime. Many of Tripoli’s Sunni men have joined the rebels in their fight to topple Assad.

"The Party of Iran calls us terrorists while they murder the Syrian people to keep Bashar [al-Assad] in power," said Walid, a young man from the coastal town of Sidon, who says several of his friends and neighbors have recently died fighting in Syria.

The “Party of Iran” is what some hardline Sunni Muslims call Hezbollah — whose name means the Party of God — to mock them for their allegiance to the Shia state.

Ibrahim’s phone holds nearly a dozen images of Hezbollah martyr posters. In one, a young fighter named Ali, who Ibrahim called his "best friend," is being watched over by the late Ayatollah Khomeini of Iran.

Many of the newer apartment blocks in the Dahiyeh were built with Iranian largesse after Hezbollah's devastating 2006 summer war with Israel left the area in ruins.

As a reminder of the fact that Israel and Lebanon are still technically at war, and that tensions between Hezbollah and the Jewish state are high, Israel has twice this year violated Lebanese air space to strike targets inside Syria.

Contrails from Israeli fighter jets are a frequent sight over the skies of Beirut.

"Our homes have been destroyed by war before, and if another one comes we will rebuild again," one elderly man in the southern coastal city of Tyre said. He seemed resigned to the seemingly inevitable war many here fear is coming, whether it is with Israel or with each other.