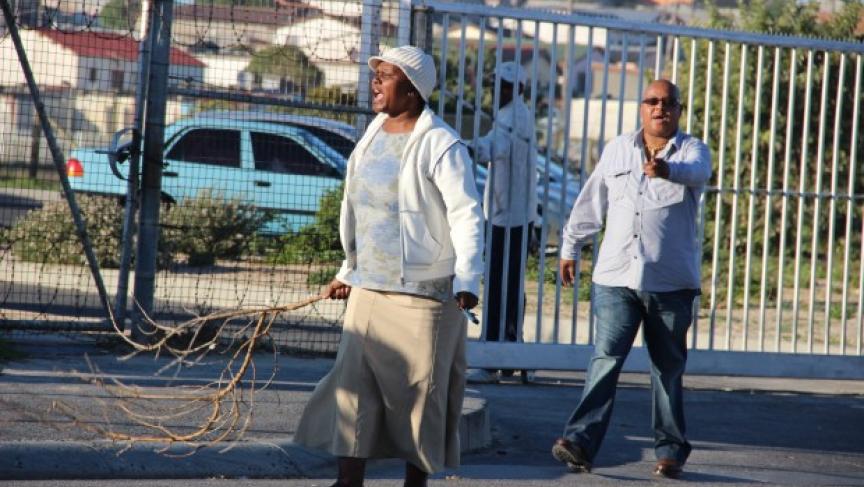 A woman wielding a tree branch chases students who are late for a class, outside a high school in Khayelitsha township.

In South Africa, corporal punishment is illegal in schools. The practice was banned in 1996 – the year the country ratified its constitution.

Yet the practice is still common here, particularly in urban townships and rural areas, and it has been in the news lately because of a tragic incident that ended up in court.

Ten years ago, a high school student named Simphiwe Shange was sitting in class when his teacher, angry with another student, took off his belt and began lashing that student. In the process, the teacher accidentally hit Shange in the eye with the belt buckle. Shange suffered a detached retina and lost vision in the eye.

Last week, a South African court awarded Shange R4 million (about 400,000 USD) in damages. The Kwa-Zulu Natal education department, for whom the teacher worked, was ordered to pay. Some educators say the ruling may lead to a crackdown on corporal punishment.

Today, I asked a class of eighth-graders at COSAT if they had ever been at a school where corporal punishment was administered. Every student raised his or her hand.

Another boy told me a teacher once hit him in the face and neck, leaving welts and scrapes – all because he missed one question on his math homework.

Most students said they were not aware that corporal punishment is illegal. That may be because it’s so common in Xhosa culture.

“My mother says that it should be done, because it is the way of disciplining children,” said 14-year-old Somila, when I asked how his parents responded to a beating he received at his school last year.

COSAT seems to be one of the few township schools that abides by the law. Students said they have never heard of a COSAT pupil being physically disciplined. The principal, Mrs. Cooper, said she has never fielded complaints from students or parents. She said she tells teachers at the beginning of the year that they may never lay a hand on students, and no further reminders have been necessary.

This lack of physical punishment has been eye opening for some.

“I’ve seen a new way of punishing learners, like detention and getting [kicked] out of class for at least two minutes,” said eighth-grader Yonela.

At Yonela’s old school, a woman would often chase students who were late for class with a tree branch. I asked Yonela if she prefers detention to the tree-branch or plastic pipe kind of physical punishment.

“Yeah, it’s better,” she said, adding that beatings can leave your hands so sore that you can’t write or do your homework.

But despite the fact that every student I spoke with opposes corporal punishment, and a growing number of health organizations oppose the practice, some teachers at COSAT still think it should be reinstituted.

One teacher, who asked not to be named, said severe beatings – like the kind she and her classmates received – should not be allowed. But controlled lashings, which send a clear and powerful message, should be.

“In our culture, it is necessary,” she said.