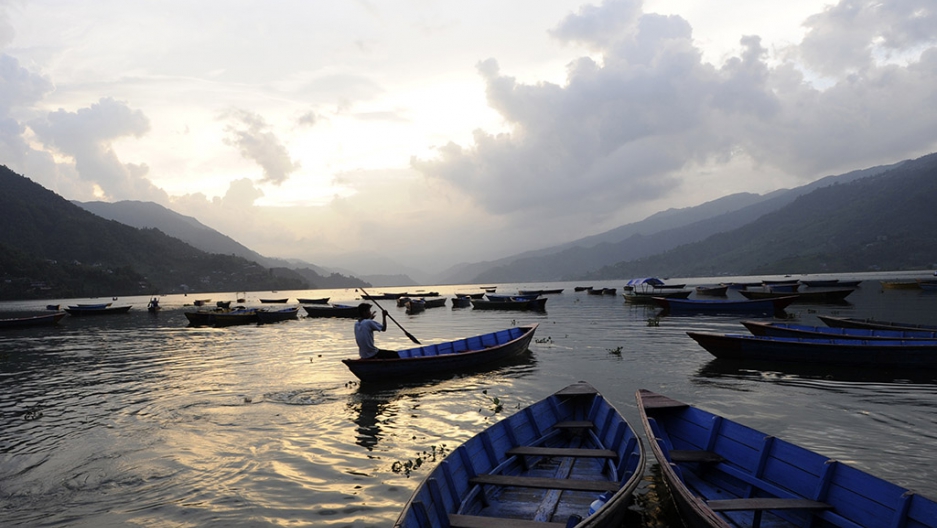 A boat makes its way across Phewa Lake in Pokhara, some 200 kms west of Kathmandu, on July 1, 2012.
Credit: PRAKASH MATHEMA
Share

On Friday, GlobalPost Senior Correspondent Jason Overdorf took us out on the town in Pokhara — one of the largest cities in Nepal, second only to Kathmandu.

Due to its envious proximity to three of the world's 10 highest mountains, Pokhara has established itself as a popular tourist destination for hikers and adventurers alike, boasting captivating views of the Himalayan and Annapurna mountain ranges.

Jason recently spent some time with the local Sherpa guides who brave the trek up Mt. Everest but who have gotten a bad reputation as of late.

For this @AFridayIn tweeting travel series, Jason's adventure began on the puddle-riddled, pub-lined streets of Pokhara. And, as luck would have it, he got to live out a Jimmy Buffett fantasy, after actually drinking pina coladas and getting caught in the (Nepalese) rain.

By the end of the night, Jason gave GlobalPost readers and followers a saucy look at this Nepalese city — we learned a little about the Pokhara music scene, a lot about the local watering holes, and for a few hours, we were given an on-the-muddy-ground view of a distant city with a whole lot of character.

If you missed it live, catch up with Jason's trip in the tweets below. To see the rest of GlobalPost's adventures, check out our series page and follow along: @AFridayIn.