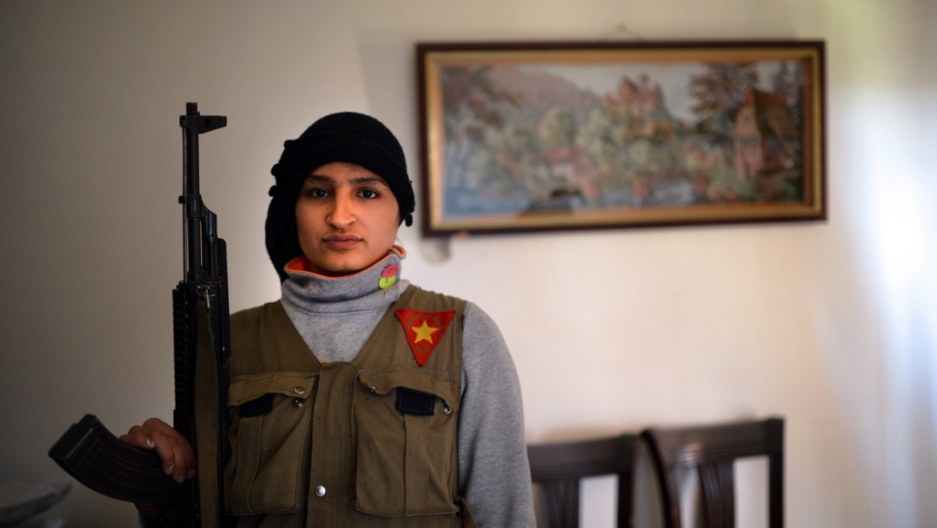 Sawoushka Ahmed, a Kurdish female fighter stands with a gun in the majority-Kurdish Sheikh Maqsud district of the northern Syrian city of Aleppo on April 14, 2013.
Credit: DIMITAR DILKOFF
Share

“Headscarves encroach on a woman’s freedom,” Angizek, who is now in charge of the Aleppo branch of the powerful Syrian Kurdish militia, YPG, tells the bearded and otherwise intimidating men. “I refuse to discuss this matter with extremists.”

Across a tiny stream in the neighboring district of Masakan Hanano — which is under the control of the Free Syrian Army — are 15 female fighters from an Islamic fundamentalist battalion called Ghorabaa al Sham.

“We are all mujahedeen. Our job is to fight jihad, that’s all,” said one 24-year-old Islamic fighter in the battalion.

“We fight only for God,” she said. “We don’t want anything for this life, just the afterlife.”

There are roughly 5,000 Syrian women involved in either fighting or military logistics for the rebels, according to the Syrian Observatory for Human Rights, a Britain-based monitoring group aligned with the opposition.

Most women, particularly among Syria’s Sunni Arab communities, stay at home and away from the increasingly deadly battles. Some play a more supportive role, cooking and cleaning for the male fighters.

But in the case of Angizek and her extremist counterparts in Ghorabaa al Sham, even their shared hatred for the Assad regime may not be enough to overcome their opposite visions of both a woman's role in society and of post-war Syria.

Angizek’s YPG follow the teachings of Abdullah Ocalan, the founder of the Kurdish Workers Party (PKK), a Kurdish opposition group founded in Turkey which fought a 30-year guerilla war against the Turkish state. He wrote extensively about empowering women in society, military institutions, and as political leaders.

More from GlobalPost: Kurds in Syria: A struggle within a struggle

While the Assad regime repressed the Kurdish population — which make up roughly 11 percent of the population — the secular nature of the Assad government in some ways appeals to the YPG over the Islamist ambitions of the opposition.

These fundamental differences have put YPG, whose leaders say some 40 percent of their fighters are women, at odds with large swathes of the Syrian opposition like Ghorabaa al Sham that want to see an Islamic state.

The Sunni fundamentalists who now make up the rebel commander ranks were themselves imprisoned under Assad. Particularly in the rural areas where religion plays a key role in all aspects of life, many Sunnis viewed the secular government as encroaching on their rights as Muslims.

“She is one of the many women who was raped by Assad’s dogs,” 43-year-old Eklas — a mother of 10 and commander of the women’s unit inside Ghorabaa al Sham — said of one of her female fighters, a former university student turned Islamist rebel. “That’s why she insists on being a sniper.”

For Eklas, the front line is a family affair: her husband, brothers and five of her sons are fighters in the same battalion.

“I am so proud of my children,” she said as she prepared an M16 machine gun for a front-line mission with two of her sons, 13 and 17. “I encourage them, but they encourage me so much more.”

More from GlobalPost: Syria: One on one with the leader of Jabhat al-Nusra

Eklas still works under the command of the battalion’s men, but is in direct control of the 15 women fighting with the group.

The female fighters occasionally join the men on the front line. But mostly they work at rebel checkpoints to search women or assist men in searching the homes of suspects where women might be present.

Because men cannot search women or enter a home when women are present, this supportive role honors the laws of Islam, Eklas says.

Angizek scoffs at the opposition’s tendency to keep women in secondary roles.

Angizek’s troops have themselves clashed with both Ghorabaa al Sham, including some women, and Jabhat al Nusra, the most prominent fundamentalist group that claims links to Al Qaeda. They were battling for the Ras al Ain border crossing in northeast Syria, eventually ending the fighting with a joint agreement.

“They don’t trust the women to put them on the front line. They use them only for show,” Angizek said of the Arab female battalions. “If there wasn’t a man next to them they couldn’t move freely.”

Nojan is a 26-year-old Kurdish front-line commander in Aleppo.

“There is no chance for women to do anything in this society,” she said as she checked her sniper lines, walking through a chain of empty apartment blocks where her snipers were positioned in dark rooms. From there, they watch the enemy through fist-sized holes in the walls.

More from GlobalPost: On Location: Life and Death in Aleppo (VIDEO)

Women are “not allowed to learn, to think to be free. So she became like a slave in society,” she said.

For Eklas and her colleagues, the fight is about religion rather than feminist ideals. But Angizek, like Nojan, has a broader view.

“We are not only fighting a regime, we are fighting culture,” Angizek told GlobalPost as the bearded men she was scolding left the Kurdish base. “If women are not free, then society is enslaved.”