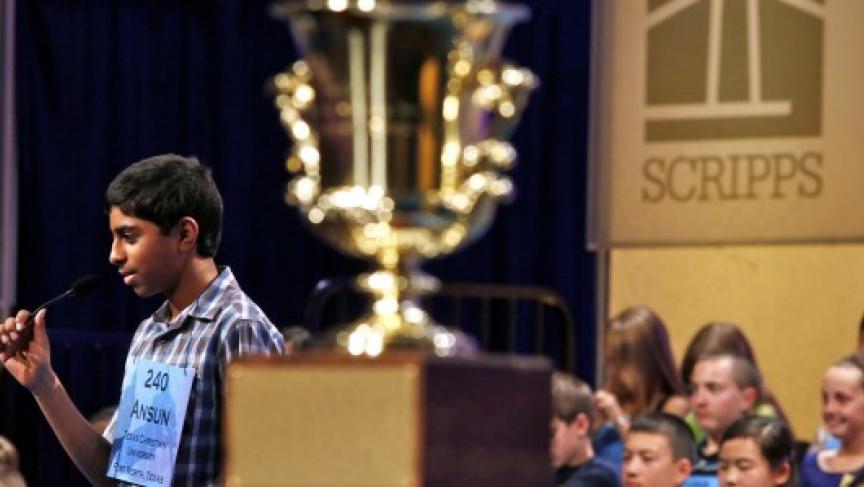 Ansun Sujoe, of Fort Worth, spells a word correctly behind the winner's trophy during the 2013 Scripps National Spelling Bee, May 29, 2013.

Imagine the scene: a small, Rust Belt town on the shores of Lake Erie, the kind of place where diversity meant Irish and Italian.

It was the glorious era of stirrup pants and gravity-defying bangs, and our mild, midwestern suburb had become the backdrop for a showdown of wild west proportions. At least that’s how it felt when I stepped onto the windswept playground and met the steely gaze of my newfound arch nemesis. Granted that she and I had been friends from first grade through just days before, but those longstanding loyalties now meant nothing. What’s true in the hive was proving true of the fifth grade spelling bee finals: there could be only one queen bee, and neither she nor I were going down without a fight.

It doesn’t matter who won (for the record, it was not her). Our rivalry was superseded by the fact that she and I were the only Indian American girls in our class. There was one other child of Indian immigrants, but sadly for him, he was ousted during a preliminary round by the likes of ‘cauliflower’ or ‘chinchilla.’ He coulda been a contender. In fact, he started out as the one to contend with, because he had won the spelling bee when we were in fourth grade. 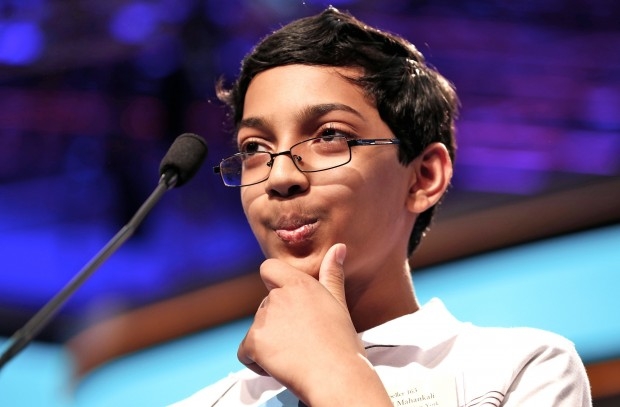 Arvind Mahankali of New York ponders a word on his way to winning the 2013 Scripps National Spelling Bee. Mahankali won by correctly spelling “knaidel,” a kind of dumpling. Mahankali had finished third in the contest twice before.

Much has been made of the fact that eleven of the past fifteen National Spelling Bee champions have been children of Indian immigrants, and longtime observers joke that Indian American kids are to spelling what East Africans are to long distance running. At best, the comparison speaks to the intensity of the National Spelling Bee, the endurance it requires, and the years of practice needed to excel. At worst, it perpetuates the myth of the model minority.

All this lead me to wonder about a seemingly unrelated (though potentially parallel) phenomenon that I began noting while I was living in India in 2005-06. Namely, the ever growing number of horrible Indian spellers.

I expected no shortage of ways to feel overwhelmed by my year in India, but I did not expect to feel overwhelmed by d nmbr of indians who write lyk dis. In case you didn’t quite get that last part, it translates to, “the number of Indians who write like this.” Over the past seven years, I’ve alternated between fury and fascination as I’ve observed friends and young relatives in India whose emails, texts and Facebook posts could easily pass for the most tragic excerpts of Flowers for Algernon.

Consider this email from one highly paid young Indian woman who was trained as a systems engineer and who now works as an IT risk management professional in the US:

Abbreviations, poor spelling, faulty sentence structure, lack of capitalization, a dearth of punctuation — the author of this email hits all the main requirements on the text speak checklist (also known as txtspk, chat speak, SMS talk, etc.). Had she thrown in a :-) or a ‘lol,’ she’d graduate to grandmaster.

While text speak is growing worldwide, its rapid spread throughout the Indian subcontinent reveals a unique paradox: India attained an edge in software and IT in no small part because it is home to the world’s second largest population of English language speakers, yet the rapid spread of technology in India is also accelerating the transformation of standard English into something many of us may no longer recognize. Robin Danzak is an Assistant Professor of Communication Sciences & Disorders at the University of South Florida (and a friend of mine since childhood). She put it this way: “When you’re exposed to more languages — as Indians in India are in ways that we in America are not — you’re more willing to take risks between languages.” Whereas I initially attributed text speak in India to laziness or a deficiency of literacy skills, she views it as the natural outcome of, “An active mastery of multiple languages.”

Still unconvinced of the merits of text talk in India and beyond? American University linguistics professor Naomi Baron has one word of advice: “Relax.”

“Languages naturally keep changing,” says Baron. For instance, she notes that, “English sentences are less than half the length that they were several hundred years ago.” Spoken language has become increasingly informal since the 1950s, Baron adds. In turn, “Writing, which used to be formal in many instances — is increasingly adopting the style of informal speech.”

So how are young, text-talking Indians connected to their super spelling Indian American counterparts? I posed the question to a friend named Ravi Satkalmi. In addition to being Indian American, Satkalmi previously worked as a South Asia analyst for the Department of Defense. Prior to that, he was a Fulbright scholar to India, where he looked at Indians who had immigrated to the US and who had chosen to return to India.

“Both the spelling bee and this texting lexicon are related to identity,” Satkalmi says. Indian Americans make up 1% of the US population, so a string of triumphs in the spelling bee serves as an annual announcement to the other 99% of the country that Indian Americans have arrived. Similarly in India, flouting the rules of English spelling via electronically-mediated communication is a way for one-sixth of humanity to assert a newly confident national identity. As Satkalmi sees it, “It’s almost poetic that Indians are using technology to adapt English in a way that’s totally their own.”