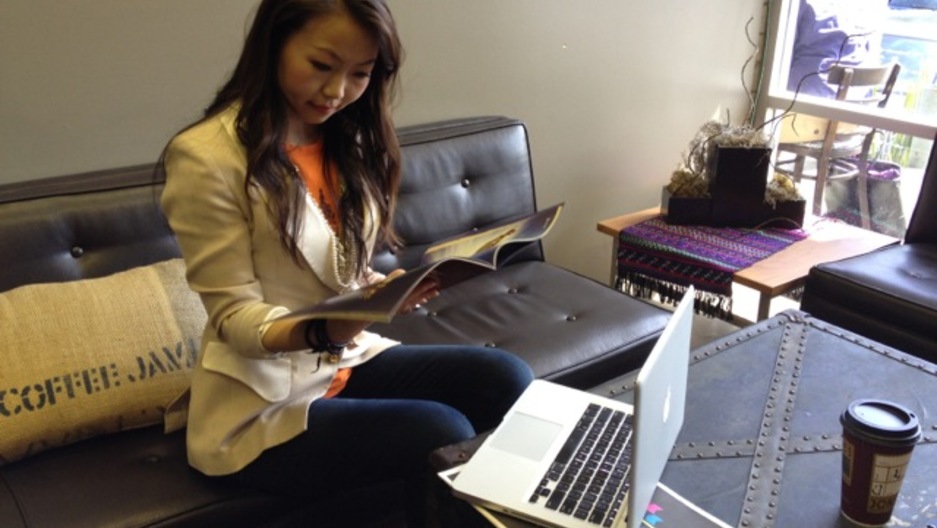 Carol Zou came to Los Angeles seven years ago from the city of Harbin, China. Now, she’s a host for Skylink TV, a Chinese cable channel in Los Angeles and working on a guide for Chinese international students. (Photo by Ruxandra Guidi.)

In the United States, the tree-lined campus of the University of Southern California is the number one destination for international students, the majority of them from China.

USC was Xiangyi Jing’s top choice after she researched the rankings of U.S. universities. The 26-year-old grad student has excelled, at least academically. But it has been rougher to figure out how to socialize American-style. So, since 2008, the university, which enrolls the most Chinese students of any U.S. university and charges $45,000 a year for tuition, is working to make incoming Chinese students feel more at home.

“One of the things you might be thinking when coming to the U.S., is how will I make American friends?” said the narrator of a USC video in Mandarin.

It’s designed for new students like Jing. To attract more students like her, USC is pouring resources into workshops and videos for their 13-week course called “American Culture.” The footage shows students chatting and smiling and exchanging that trademark American greeting: the handshake.

“The goal of the class is to teach students about American culture, the things that they probably wouldn’t pick up on just by watching TV,” said Chrissy Roth, USC’s orientation program manager. “So we want to actually give them experiences, bring them off campus, take them on field trips, take them to restaurants.”

For Jing, much of what she learned in her “American Culture” course centered around food.

“Last semester I took the ‘American Culture’ course, and the teachers, they brought us to some restaurants, and I also went to a Thanksgiving dinner to try some American food,” she said.

She may have experienced Thanksgiving, but breaking out and interacting regularly with non-Chinese students, that’s just barely happening after a year in the U.S. Jing’s pretty quiet, and no books or videos can get rid of shyness, she says.

Of course, not everyone can afford USC and tap into its efforts to help international students integrate. For other students, those attending community colleges, they can be left flying more solo.

That’s been the case with 23-year-old Ben Yuan Liu, from Qingdao, a city in eastern China. His family sold its home there to send him to Santa Monica College, a community college in Los Angeles. So far, he has enjoyed studying applied mathematics. But looking back, he wishes he had loosened up his plan a bit — maybe move here a year earlier to acclimate and work — be less of a financial burden on his parents and gain more independence.

“I’m sometimes, like, too careful about my steps. Maybe I should do more adventurous things,” said Liu, thinking about what he might have done differently before leaving for his new life in the United States.

Hoping to help students like Liu is Carol Zou. Sitting at a cafe in Pasadena, she is impeccably dressed in a white blazer, high platform heels and coral lipstick. She may look wealthy, but she’s quick to say that she’s not from Beijing — but from Harbin, a city in northeast China.

Her family also sacrificed to pay for her community college in Los Angeles and she too has struggled to find her footing here.

“First of all, living without your parents, money was the first issue. Even though Chinese people now have the reputation for their wealth management,” she said, laughing. “But as a 17- or 18-year-old student, I didn’t have any idea what was expensive or what was cheap.”

Back then, she didn’t know how to budget for meals or rent. Zou, now 26, is working on a book tailored to Chinese students called “How to Survive in the U.S. as an International Student.”

These days, Zou is always on the go, networking, at social events. She is also a host for Skylink TV, a Chinese cable channel here. And last year, Zou became a U.S. citizen.

Now, she cannot quite imagine returning to Harbin.