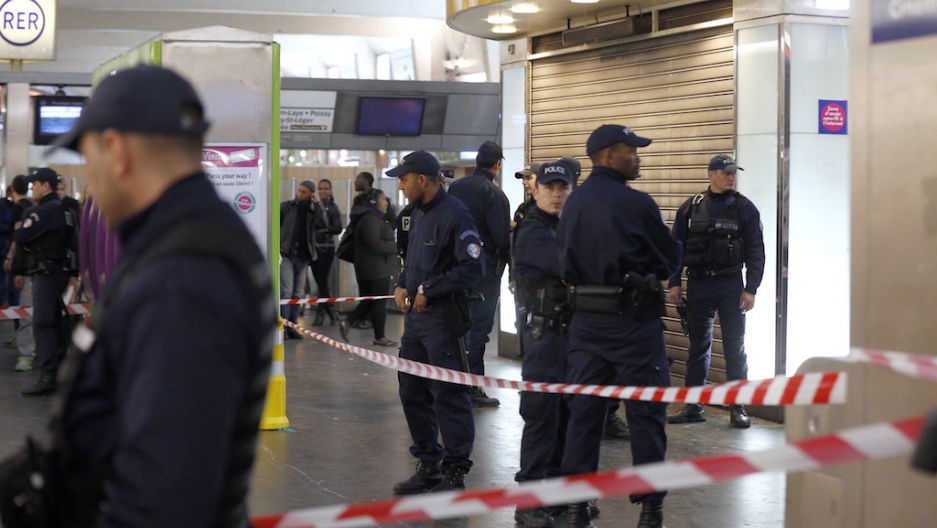 Police officers stand at the site where a man armed with a box cutter attacked a French soldier patrolling a subway station of Paris' business district, stabbing him in the neck, on May 25, 2013 in La Defense. The soldier in uniform was armed and was patrolling as part of France's Vigipirate anti-terrorist surveillance scheme. France's defense minister said the soldier stabbed in Paris Saturday was targeted because he was in the army and vowed to continue his country's "implacable" fight against terrorism. Police said the man would survive.
Credit: FRANCOIS GUILLOT
Share

A 21-year-old man has confessed to stabbing an on-duty French soldier for what prosecutors described as "religious" reasons.

The suspect, identified only as "Alexandre," was arrested in a Paris suburb early Wednesday morning, four days after Private First Class Cedric Cordier was stabbed in the neck as he patroled a shopping and transport hub in the French capital.

The evidence suggests that he wanted to kill a representative of the French state "in the name of his religious ideology," prosecutors said.

Investigators traced the suspect via DNA evidence found at the scene of the attack, police sources told Agence France Presse. His DNA was on record after earlier arrests for misdemeanors.

He was also known to police as a Muslim convert, having been stopped in 2007 for praying in the street. Sources described him to AFP as a follower of "traditionalist even radical Islam for the last three or four years," though authorities did not suspect him of dangerous extremism.

That, combined with the similarities between the attack and the murder of a British soldier in London three days earlier by two men claiming to be Muslims, leads prosecutors to believe that the suspect was motivated by religious extremism, Molins said.

"It seems clear the intent was to kill."

Authorities are treating the attack as a terrorist act, the prosecutor said.

Although President Francois Hollande has cautioned against making a link with the fatal attack on British soldier Lee Rigby, there are similarities and concerns they are part of a worrying new terrorist trend.

Like the London attack, the Boston bombing and the killing spree by Mohammed Merah in southern France last year, the Paris attack seems to have been carried about by disaffected home-grown youth acting alone, or within a small group.

Cordiez, 23, was hospitalized with non-life-threatening wounds. He was released on Monday and has since rejoined his unit.