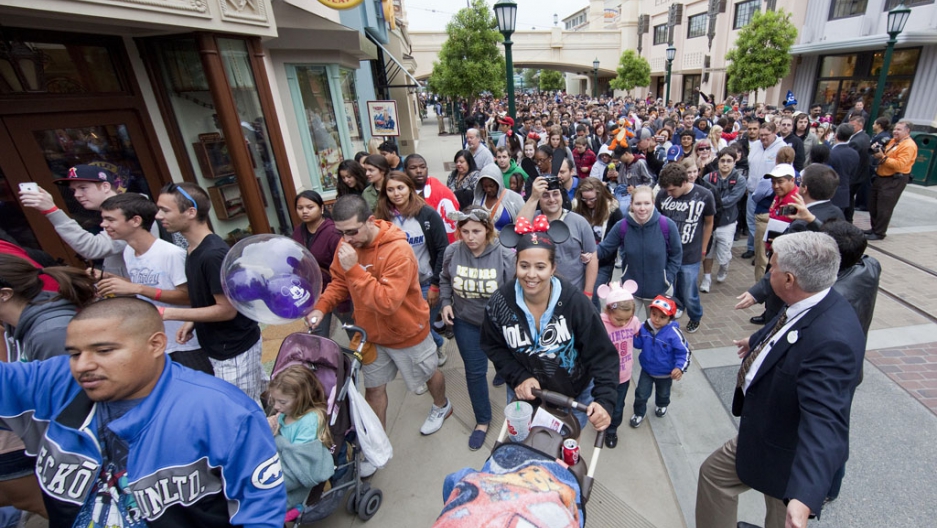 Thousands of guests enter Disney California Adventure park in Anaheim, Calif. June 15, 2012. The ceremony celebrated more than 20 new attractions and shows that have been added to Disneyland during a five-year expansion.
Credit: Handout
Share

Disneyland staff evacuated Mickey’s Toontown early Tuesday evening after someone dumped a dry-ice bomb into a trash can, causing a small explosion.

A park representative told Reuters that staff evacuated patrons, but they were allowed to return just a couple of hours later.

“This afternoon, a small bang was heard in a trash can at Mickey’s Toontown,” a Disney spokesman said. “In an abundance of caution, we evacuated Toontown to allow local authorities the opportunity to investigate.”

Anaheim police, but not firefighters, responded to the theme park about 5:30 pm Tuesday, the Los Angeles Times said.

A bomb squad also responded, the LA Times said, and the park was reopened about two hours later.

Police arrested a 22-year-old theme park employee on Wednesday and were holding him on $1 million bail on suspicion of possessing a destructive device, the Guardian reported.

The suspect, Christian Barnes, sold drinks from a cart at the park.

"Barnes is cooperating with investigators and has indicated this is an isolated incident with unanticipated impacts," Anaheim police Sgt. Bob Dunn said Wednesday, according to the LA Times.

The newspaper said dry-ice bombs are becoming disturbingly common in Southern California, with this being the third in the last few weeks.

“Unfortunately, it’s an all-too-common experience,” Sgt. Dunn said, according to the Times. Dunn added that the Toontown explosion didn't seem to be related to the other explosions.

A witness told The Associated Press he could hear the concussion from far away.

“I looked up. Everyone stopped and looked up,” Allen Wolf said. “Security surrounded the trash cans then told everyone they were evacuating.”

Chemistry.about.com says dry-ice bombs are legal in many areas if used for scientific or entertainment purposes.

As the ice melts, it gives off a gas that quickly expands and ruptures the container it's placed inside.