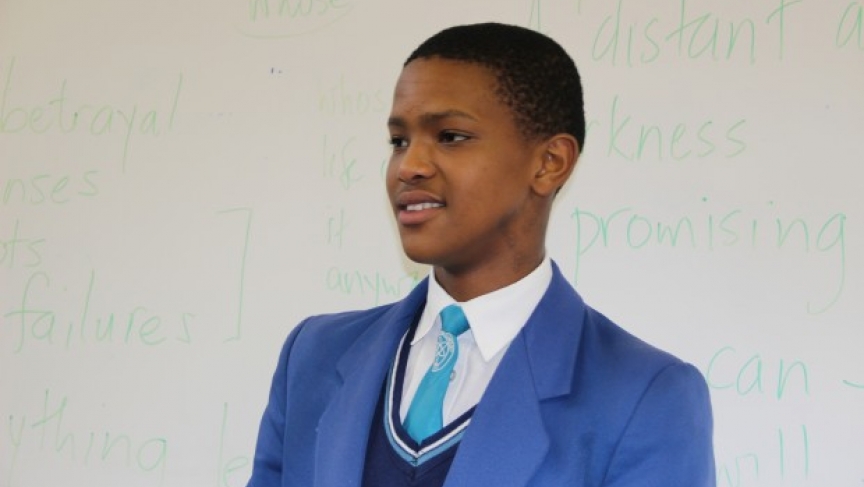 Phumlani, a ninth-grader at COSAT, explains why he wants to be a psychiatrist.

“Mrs. Godden, the speeches!” the students shouted, almost in unison.

During the first half of the class, students in Mrs. Godden’s ninth-grade English class had looked – frankly – a little bored. They were learning about the proper use of commas and quotation marks, when one student mentioned that they hadn’t all given their speeches. Pretty soon the whole class was chirping about it. Everyone now sat up straight.

A tall, slender freshman named Phumlani walked toward the front of the room.

His classmates rolled with laughter.

“Eventually, I decided to be a psychiatrist,” Phumlani continued. “A psychiatrist is someone who listens to and diagnoses people’s problems – mental and emotional problems. A psychiatrist can make one-hundred thirty rand [about fifteen U.S. dollars] an hour.”

The class gasped at the mountain of money.

Mrs. Godden later told me she chose this topic – What I want to be when I grow up – because she wants students to get excited about their futures. And she wants them to learn from one another.

“Maybe a student will mention a career, and another student will want to pursue it,” Mrs. Godden said. “It gets them thinking.”

It gets them excited, too.

“Earlier this year I went through some difficult emotional problems,” Phumlani continued at the front of the class. “It made me realize how important it is to have someone to talk to about things.”

Sympathetic nods and murmurs oozed forth from the crowd.

“I want to help people with their problems, and help make this world a better place,” Phumlani concluded with a confident nod of the head. His classmates burst into applause.

After the speech, Mrs. Godden and the class gave Phumlani feedback on what he did well and what he could have done better. Three more students followed, describing what they planned to be in the future and what the jobs entailed. There was a scientific researcher, an electrical engineer, and a teacher.

With each mention of a career, the students became noticeably excited and supportive. I couldn’t help but wonder if it was, at least partly, because none of their parents have such careers.

When the class wrapped up, Mrs. Godden told me she likes to mix in these kinds of speeches with the regular lessons.

“There’s so much love in this class,” she said. “I want to give them a chance to express that love, and that support.”

The class missed the end of its lesson on commas and quotation marks.