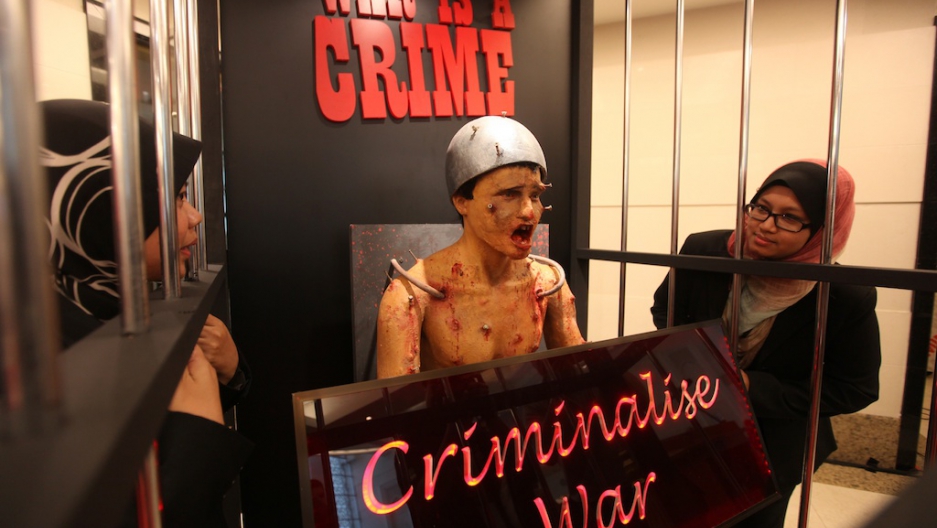 BANGKOK, Thailand — When it debuted in 2002 to high praise, the International Criminal Court was seen by many as a dream realized.

Dictators and war criminals, which left the 20th century so bloody, would finally fear a permanent tribunal with global reach. As the United Nations’ then-Secretary General Kofi Annan said following the court’s inauguration, "Impunity has been dealt a decisive blow."

But in the vision of a lesser known tribunal — located not in the Netherlands but in tropical Malaysia — the UN-backed court is too weak to challenge the impunity of the world’s two major atrocity perpetrators of the past decade: the United States and Israel.

This tribunal has tried and sentenced former US President George W. Bush and his closest aides as war criminals, in absentia, over charges tied to the Iraq War. In August, the tribunal will hold hearings on alleged war crimes in Israeli-occupied Palestine.

The Kuala Lumpur War Crimes Tribunal, which prosecuted its first case in 2011, is an entity ambitious as it is unusual.

“It’s very difficult for other nations to bring violators to justice unless the US agrees,” said Yaacob Merican, an attorney and secretary general of the tribunal’s investigation wing, the Kuala Lumpur War Crimes Commission. “What happens at The Hague is exported by the US."

Its judges are distinguished attorneys, some of whom have experience in The Hague. But their rulings at the tribunal are backed by no country on earth. Its defendants, though invited, never appear in court; they are represented by people the judges anoint as sympathizers.

Though founded by former Malaysian Prime Minister Mahathir Mohamad, a powerful figure who ruled his nation for 22 years until 2003, even Malaysia’s government does not accept its sentences. Regardless, he has said that the tribunals are part of a much grander mission: permanently criminalizing war itself.

“Mahathir is a visionary,” said Yaacob, who compared the ex-premier’s prescience to that of Abraham Lincoln and William Wilberforce, the 19th-century British slavery abolition hero. “We are trying to change the mindset on war. If you cannot agree with another country, go to the table, argue, shout over the conference table. But do not go to war.”

So far, the tribunal has not escaped the shadow of its founder. Mahathir is an unrepentant critic of American imperialism also known for propagating theories on Jewish world domination. While ostensibly committed to war crimes worldwide, the tribunal is almost exclusively focused on atrocities pinned on America or Israel.

In 2003, the year in which he stepped down after two decades as his Muslim-majority nation’s leader, he proclaimed to an Organization of Islamic Cooperation summit that “Europeans killed six million Jews out of 12 million. But today the Jews rule this world by proxy. They get others to fight and die for them.”

Just last year, on his popular blog, he wrote that “I am proud to be labeled anti-Semitic...how can I be otherwise when the Jews, who so often talk of the horrors they suffered during the Holocaust, show the same Nazi cruelty and hard-heartedness towards not just their enemies but even towards their allies should any try to stop the senseless killing of their Palestinian enemies.”

His tribunal, Mahathir acknowledged in an op-ed last year, is “toothless.”

But it is needed, he wrote, because international laws on war crimes “are applied only against weak countries” and because Americans appear unwilling to hold their own leaders accountable.

“That this country is the greatest military power in the world is truly frightening...The people of the US are well known for their insularity. They know little about the world beyond their borders. They believe that they are always right," he wrote.

Mahathir’s style of anti-Israel and anti-US rhetoric is common both at tribunal hearings and among other figures in his camp. On the tribunal’s board of trustees is Matthias Chang, Mahathir’s attorney and confidante, and author of the book “Brainwashed for War, Programmed to Kill: The Zionist Global War Agenda.”

At the tribunal’s last hearings on abuses in Palestine, a lead prosecutor, Gurdial Singh Nijar, explained that “when we use the word ‘Jews’ here, we are talking primarily about the Zionist Jews. These are Israelis furthering the Zionist cause in as much as Germany was advancing Nazi fascist rule.”

‘PLAYING TO THE GALLERY’

Neither US or Israeli leaders or their troops can be prosecuted by the International Criminal Court. Israel never signed the court’s statute; the US under former President Bill Clinton signed it in 2000, but the Bush administration announced it would never ratify the statute and had “no legal obligations” under the courts.

The courts in The Hague have investigated cases in Libya, Venezuela, Iraq, Colombia and elsewhere. But so far, they have only lodged convictions for rulers from poor African states such as Sierra Leone and the Democratic Republic of the Congo.

“You’ll notice they’re all from Africa,” Yaacob said. “I’m not saying they don’t deserve justice. But be fair.”

However toothless, the Kuala Lumpur tribunal considers itself a “full legal entity,” said Zulaiha Ismail, executive director of the Perdana Global Peace Foundation, another Mahathir-led project to end war. “We use qualified judges. We follow the right procedures. We even had a judge refused because he was too one-sided.”

But Mahathir’s ego has perhaps clouded a mission that is otherwise honorable: holding powerful nations accountable for unjust acts of war, said Greg Lopez, a Malaysian and visiting fellow at Australian National University’s Department of Political and Social Change.

“There is a consensus on (former United Kingdom Prime Minister) Tony Blair and Bush Jr. that their second Gulf War was a false war,” Lopez said. “But this should not be a vendetta and it should not be about one person’s ambition.”

Now 87, Mahathir presided over Malaysia as it rose to become one of the few Muslim-majority states outside the Middle East to achieve economic success. In Malaysia, he is deeply revered by many for leading Malays to prosperity. But he is also scorned by detractors who blame him for strengthening the ruling party’s authoritarian style of rule.

“When Mahathir retired in 2003, if he’d just kept his mouth shut, he would have gone down as Malaysia’s greatest prime minister,” Lopez said. “He did great things for Malaysia. He put Malaysia on the map. But because of this ego he has, he overreaches himself.”

Though popular among many Malay nationalists for daring to lash out at Western imperialism — Malaysia is a former British colony — his actual policies were often quietly aligned with the US and its allies.

Under Mahathir, and today, the two nations’ militaries train together and swap intel; the US is among Malaysia’s top trading partners; and American conglomerates (namely electronics manufacturers) help power Malaysia’s economy.

Much of Mahathir’s anti-West and anti-Israel talk is “playing to the gallery,” Lopez said. “Some of Malaysia’s most loyal investors are Jews. The facts suggest that Mahathir knows where his bread is buttered. And the West knows he’s not a Hugo Chavez or a Fidel Castro.”

Regardless of Mahathir’s controversial profile, Yaacob said, history will vindicate his vision of a world without war.

“A lot of people in the West have a very negative view of Mahathir. It’s quite sad because his vision is something all sides can support,” he said. “But we know what we’re trying to propagate now won’t be seen in our lifetimes or even our grandchildren's’ lifetimes.”