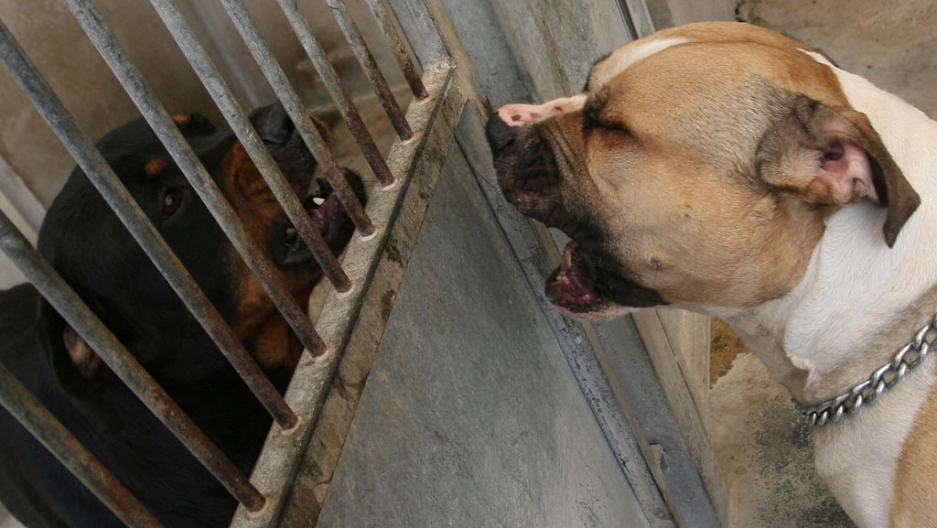 An American Staffordshire terrier which killed a 17-month-old girl is held in the SPA (Society for the Protection of Animals) dog pound in June, 2006.
Credit: THOMAS COEX
Share

A jogger attacked by three American bulldogs in Australia was so badly injured that paramedics could see his heart through a hole gnawed in his chest.

The man, 49, identified by one TV channel as Robbie Nelson, underwent surgery after the attack in Sydney while the dogs were euthanized, Fairfax media reported.

The dogs — whose breed name is American Staffordshire terrier — were unregistered, despite their owner having previously been fined for failing to have them registered.

The Australian cited police as saying that they escaped through a hole in the owner's fence.

The Australian Broadcasting Corporation, meantime, cited a neighbour, Sharon Ferguson, who witnessed the attack, as saying Nelson was screaming in agony:

"He was in a bad way, he was covered in blood and in a lot of agony, screaming for the ambulance to hurry up and get here. There were people chasing the dogs with poles and they started chasing the people. If that had been a child, there would have been no hope for them."

Fairfax wrote that the dogs mauled the man for about five minutes before would-be rescuers heard his cries for help.

One of them, Chris Thompson, 40, was at his home nearby when he heard the man screaming for help and says he ran outside with his friend Colin McEwan to find the dogs the jogger, who was bleeding heavily from deep gashes to his arm, armpit and chest.

He told The Daily Telegraph:

"They were gnawing on his shoulder the way dogs do when they have the knuckle of a bone. I grabbed a pot plant and cracked it over the dogs' heads and the shock made them disperse but then they came back and latched onto Colin's hand. Colin was on the ground and it went for his head but I got it with a hammer just in time."

Passengers from a passing bus reportedly also stopped to help the man.

Paramedic John Brotherhood said the jogger had suffered some of the worst injuries he had seen in his 27 years as a paramedic — so bad that he had to administer intravenous drugs through his foot.

He echoed comments by police, saying, "It's a very brave act by those two men to help the other fellow."

One witness told Channel Nine that he saw one of the victims covered
in blood:

"The bloke walked down, he was covered in blood on the left arm and the right arm. I don't know what sparked them off but they were just turning on everybody. Anyone coming down, they went for them."