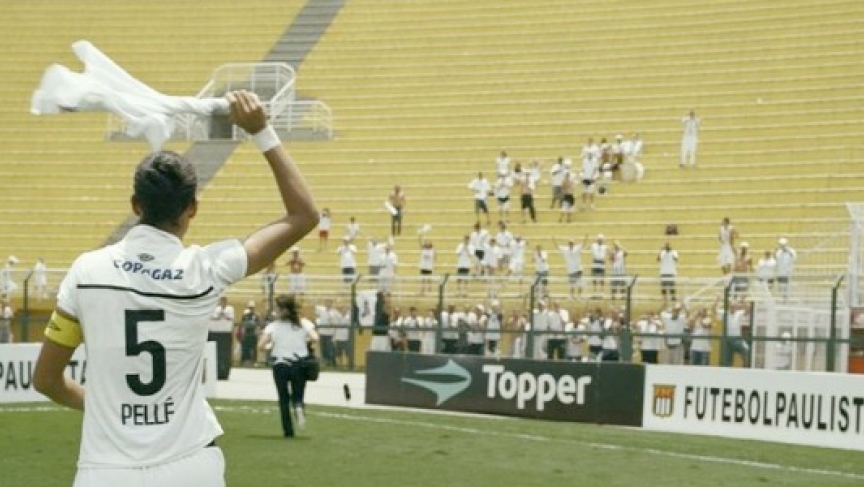 Aline Pelligrino leaving the field after her team, Santos, wins a league championship game in 2010.

In a little more than a year, Brazil will host the World Cup of Soccer. The Brazilian national team has won the event an unprecedented five times, and much has been written over the years about why Brazil is so dominant. One theory: Many Brazilian boys are encouraged to play as soon as they can walk. But it's a different story for the other half of the population.

Brazil had a law from 1941 until 1979: Girls and women were not allowed to play soccer, not professionally, not in schools, not even for fun. The law stated that women will not be allowed to practice any kinds of sports that are incompatible with the female nature.

Three years after the law was lifted, Aline Pellegrino was born. Aline, as she's known, went on to become captain of the Brazilian women's national team for eight straight years. She's been on three Olympic teams and played in the Women's World Cup twice. Her rise was not easy.

"Brazil is the country of soccer, but people don't know it's the country of men's soccer," said Aline, speaking through an interpreter. "All the girls of my generation played with young boys. I didn't see women playing on TV. There was nobody to look up to or be inspired by. I played because I wanted to play."

Aline now heads the Guerreiras Project, along with Caitlin Fisher, an American who came to Brazil to play soccer. I met the two women at a café in the Ipanema neighborhood of Rio de Janeiro.

The Guerreiras project brings together athletes, artists and activists to promote women's soccer as a way to advance the discussion of gender equality. "Guerreiras" translates into female warriors.

"Being a fighter, being face to face with machismo in this kind of bastion of masculinity and trying to carve a space for yourself," said Fisher.

Fisher tapped the veins in her arm. "Guerreira, to be guerreira, like in the blood. You gotta fight for this."

Fisher learned how to fight for this nine years ago. She was an all-Ivy league player in the US, then after graduation she was signed by the world renown Santos Club, near the city of SÃ£o Paulo. This was Pelé's team. Fisher's excitement, however, about becoming a professional female soccer player here quickly ran into reality. There were two Santos teams: The men's and the women's.

"We weren't allowed to use their training fields. We couldn't play in the stadium, we couldn't use their buses for transportation. Waking up in the morning, walking 50 minutes in order to get to a training field, finding out the men are playing on it and you can't use it, walking another 45 minutes to another field, training for 2 hours, walking home, washing your uniform at lunchtime with your hands to hang it up to dry so it's ready for the next morning, putting your second uniform on, and having 45 minutes to walk to your afternoon training practice, and going, 'We're playing for Pelé's club right now?'"

They had few fans, and more than a few detractors. Women who play soccer in Brazil are commonly called "zapatón," or big shoes. It's slang for lesbian in Brazil, not meant in a kind way.

Fisher said things did improve dramatically at Santos in the years that followed. But in 2012, the women's club shut down due to lack of sponsorship and out-sized contracts going to the top male players. One step forward, another step back.

Soccer here has had one major breakthrough though: Marta. She was voted the best female player in the world five straight years. She's the face of women's soccer in Brazil, and much of the world. But Marta largely stands alone.

Just a notch lower, consider the case of Aline. Again, she's was captain of the Brazil women's national team for eight straight years, the female equivalent of somebody like Ronaldinho, an international superstar who make tens of millions in advertisements and salary.

I asked Aline if she gets recognized much.

"Not much, not really that much," she said. "People sometimes recognize me here as an athlete; I have the mannerisms of an athlete. The few people who do know me, shout out 'Aline!' I hug them and chat with them."

Aline is an articulate, friendly, attractive woman, who is awesome at soccer. She's never been hired to do an endorsement.

I visited the Centro Olimpico, the Olympic Center, a training facility for young athletes in SÃ£o Paulo. I watched girls under age 13 practicing. These girls are the best of the best, and it shows: strong, crisp passes and great fundamentals. They were fun to watch.

A group of 18 and 19-year-olds then strode onto the field. I asked to speak with a couple of them. They said they're a team, they speak as a team. So, I interviewed about a dozen of them at once.

I asked them if they've been given the same opportunities as the boys.

They all shook their heads no.

One girl stepped forward and said, "All of us have already suffered." She said they lack sponsorship, support, and media attention.

All of the girls said they would like to play professionally, but many don't see how. I asked what impact the World Cup being hosted in Brazil might have on women's soccer here.

A few girls said it won't help in any way. One said she was a bit hopeless for the future of female soccer in Brazil.

And do they suffer insults?

"A lot," several of them said. It didn't seem to bother them much though.

Change is slowly occurring. Mariane Pisani is doing her Ph.D. work on Brazilian female soccer. I met her at the Centro Olimpico. We spoke through an interpreter, while she gestured to the young girls playing.

"Work like this being done here at the Olympic center is sponsored by the mayor and the governor's office. It's something that could improve the training of girls at this level," she said.

But in the next breath, she added that this training center is one of a kind.

And funding for this program is said to be in jeopardy.

Pisani stressed one of the reasons why female soccer is important. Most of the girls we were watching were dark skinned, an indicator that they're from lower income families. She said for them, soccer provides a better life perspective and a chance to dream.

I also spoke with Giovana, the youngest girl on the field. She's 10. She had long curly hair tied back in a ponytail. I asked her if a lot of the girls her age in her neighborhood play soccer.

"No, just one," she said through an interpreter. She started playing with the boys when she was 4. I asked her how come she plays?

"Because I like it," she said. And, her dad played with her too, which got her into it.

And what do the boys think of her playing with them?

I spoke with another young girl, Nicole, age 12. I asked her if she thinks she'll have the same opportunities to play as the boys when she gets a little older.

"Yes," she said through an interpreter. "Because I play well."

These girls haven't experienced much discrimination or hardship. But these girls are the best of the best, the precious few who have been given the resources to play. That's still extremely rare for girls in Brazil.

Back in Rio, I'd heard about a coach known for getting girl's involved.

I went to Vidigal on a holiday morning to meet Paulo. About 30 boys were at the field. There was one girl. I spoke with Paulo through an interpreter and told him that I'd heard of Vidigal and Paulo as this great teacher of young girls, but I was a little surprised by what I was seeing. Where were the girls?

Paulo said he does have girls who play in his program, about 15.

I asked him, and how many boys?

Back down in Ipanema, I asked Aline if Brazil, being "the country of soccer," has any special responsibility to cultivate the girls game too.

"It should, it should. It doesn't but it should."