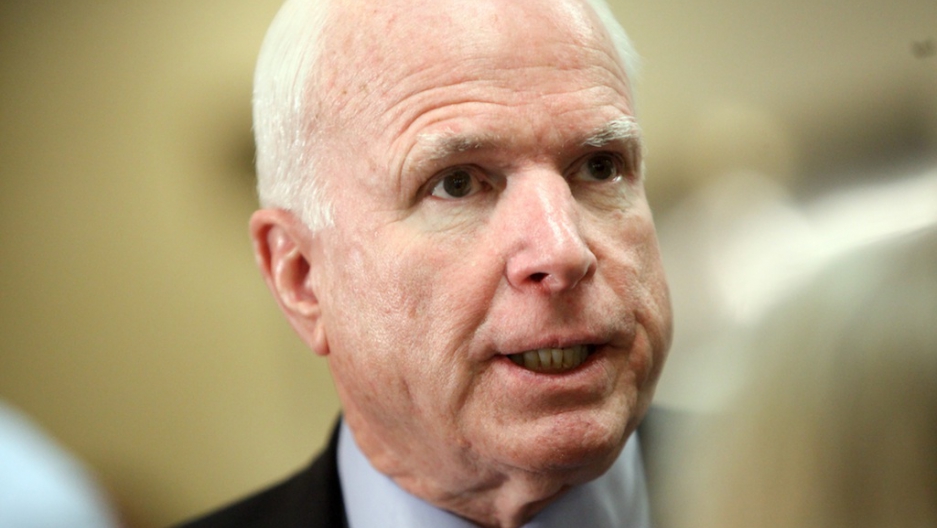 Sen. John McCain (R-AZ), a member of the Senate Armed Services Committee, speaks to the media before entering a Senate Armed Services Committee hearing in the U.S. Capitol building May 14, 2013 in Washington, DC. McCain slipped into Syria Monday on a secret visit to meet rebels — the highest-ranking US official to visit the country since its civil war broke out.
Credit: Allison Shelley
Share

McCain's visit makes him the highest-ranking US official to enter Syria since its bloody civil war broke out over two years ago, the Daily Beast reported.

He crossed into Syria from Turkey with Gen. Salem Idris, the leader of the Supreme Military Council of the Free Syrian Army. He met with various rebel leaders for around four hours before returning over the border.

As the Daily Beast exclusively reported, rebel leaders reportedly called on McCain to urge the US to increase its support of their efforts — including providing heavy weapons, a no-fly zone, and airstrikes on the Syrian regime and the forces of Hezbollah.

"The visit of Senator McCain to Syria is very important and very useful especially at this time," Gen. Idris said. "We need American help to have change on the ground; we are now in a very critical situation."

The senator is one of the most vocal critics of Assad's regime, and has repeatedly called for military intervention in the country.

In March 2012, McCain called for US air strikes in Syria, arguing that it would push Assad from power and protect civilians' lives.

Earlier this month, he also wrote a column in Time magazine arguing for a US intervention.

"Do the costs of inaction outweigh the costs of action?" McCain wrote. "The events of the past 26 months have convinced me that they do. All of the terrible consequences those against intervening predicted would happen in Syria if we intervened happened because we did not."

Though the Obama administration has increased its humanitarian aid to the region, and spoken out against Assad's regime, it has so far refrained from offering lethal assistance to the Free Syria Army.

News of McCain's hushed visit comes as Secretary of State John Kerry met with Russia's Foreign Minister Sergei Lavrov in one-on-one talks in a Paris hotel Monday, aimed at breathing life into an upcoming peace conference on Syria brokered by the two nations.

[View the story "John McCain sneaks into Syria" on Storify]