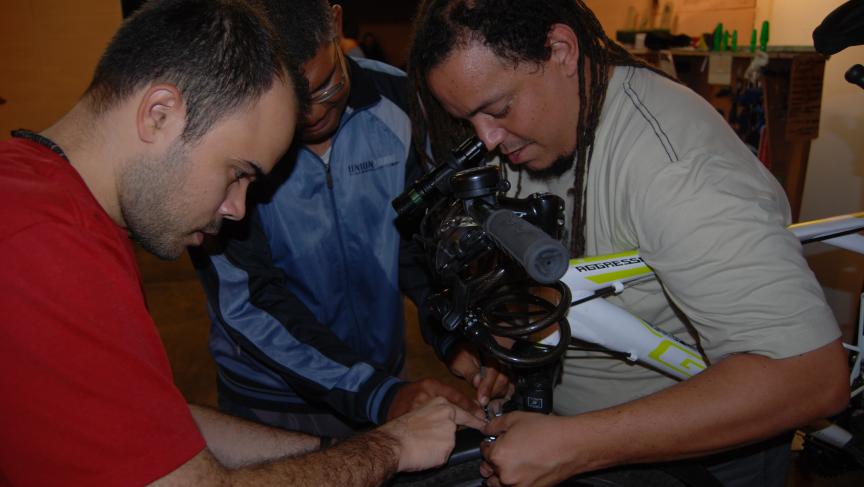 São Paulo is a tough place to get around. The city of 11 million — South America’s largest — has notorious traffic.

Rush hour traffic jams can clog up more than 180 miles of road across the city on a bad day.

There is one quick way to navigate the streets of São Paulo though: ride a bike. Problem is, you put your life at risk when you do.

Here’s a quick comparison. Last year, 18 cyclists were killed in New York City. 14 were killed in London. In the city of São Paulo, there were 52 reported cycling deaths.

So I approached a bike ride in São Paulo with a bit of trepidation. I went for a short ride with Andre Campos and Daniel Santini, two young cycling advocates. They both said, don’t worry, biking here isn’t so bad.

“I don’t think it’s such a risk, if you take special attention to some points,” Santini said. “I will avoid the speedy avenues, I will avoid to ride nearby to buses or trucks. I will try and make my way into the safest way possible.”

That’s what Santini promised we’d be doing on our ride together. But there was a problem.

“Oh yes, you have not the front brake,” Santini pointed out.

They seemed to enjoy that.

One other small problem.

They insisted I wear the helmet. I agreed.

“In Brazil, traffic is very violent. A lot of people die in traffic accidents. I don’t even like to name them accidents, because it happens all the time,” Santini said.

The data on cycling in Brazil is cloudy and it’s hard to make cross-country comparisons — it’s unclear how many Brazilians are biking to begin with or how many people are getting hurt. I called several international cycling experts who had reams of data, but little on Brazil or South America. You have to gauge cycling safety here by trying it.

Beyond the faulty brake, our bike ride was pretty tame. In fact, I quite enjoyed it. After about 15 minutes on somewhat busy streets, we turned onto a side street and were chatting as we rode along.

I told them that I only felt like one guy came too close. Mere moments later, a vehicle whizzed by and gave us a close shave.

“But he’s delivering pizzas, so he’s in a real rush,” Santini said.

That guy didn’t seem concerned at all about us. That attitude is a real problem in São Paulo, said João Paulo Amaral, a cyclist and researcher with the Brazilian consumer rights group, IDEC.

Amaral described a recent gruesome accident, where a passing car got too close to a cyclist, and severed the cyclist’s arm.

“And the driver took his arm away and threw it in a river 30 kilometers from that place. And he ran because he thought he wouldn’t be punished for that," Amaral said. "At the end, they found the guy, and he went to the police. He said he did it, he said he was sorry, and now he’s out on the streets again.”

Amaral said he still gets on his bike each day for one simple reason: It’s the fastest way to get around. In São Paulo, traffic is so bad that wealthy businessmen are relying on helicopters.

By some estimates, the city has the most helicopters in the world. Amaral says even if he could afford to do that, he wouldn’t.

“We’ve proved that helicopters are not a really good solution for São Paulo," he said. "We (had) the Intermodal Challenge, in which we have different means of transportation going from one place to another at the same time, and the bicycle won from the helicopter.”

It took the bike 22 minutes to get across town during rush hour, during the 2009 challenge, beating the helicopter by 10 minutes — factoring in time for takeoff and landing.

The bike beat the car by a full hour.

More and more people are getting this message and a cycling culture is slowly taking hold. I visited a weekly event called “Mao Na Roda,” which translates to, “Hands on the wheel.” Mathias Fengarmann hosts it in his garage.

“It’s a kind of bike workshop, where people come here to learn and work on his own bicycle,” Fengarmann said.

A few experienced cyclists come here to teach others how to change tires or fix brakes. You can also take a beer from Fengarmann’s fridge, and put a few bucks in a wicker basket on the honor system. The goal of this informal happy hour, said Fengarmann, “(is to) encourage people to use (the) bicycle.”

Ten, 15 years ago, he said, cycling in São Paulo was worse than today. He said, every day it’s better here because more people are riding. There’s safety in numbers.

But the numbers in São Paulo still look thin to me. I told bike advocate Daniel Santini that I’d seen no more than a dozen cyclists in three days in São Paolo, and I was on the lookout. We saw no other cyclists on our 20-minute ride together.

“One, one just passed through right now,” Santini corrected me with a laugh.

That’s the catch 22: São Paulo is a dangerous place to ride, in part because not enough people do it.

There’s also not much in the way of bike lanes. But to get more lanes, there has to be more clamor for them. Santini assured me there will be. He said everybody is unhappy with the traffic and pollution in São Paulo.

“It’s boring to be in a city where you cannot move, you are always stuck in traffic jams,” he said.

But things are changing, he said, because they have to change.