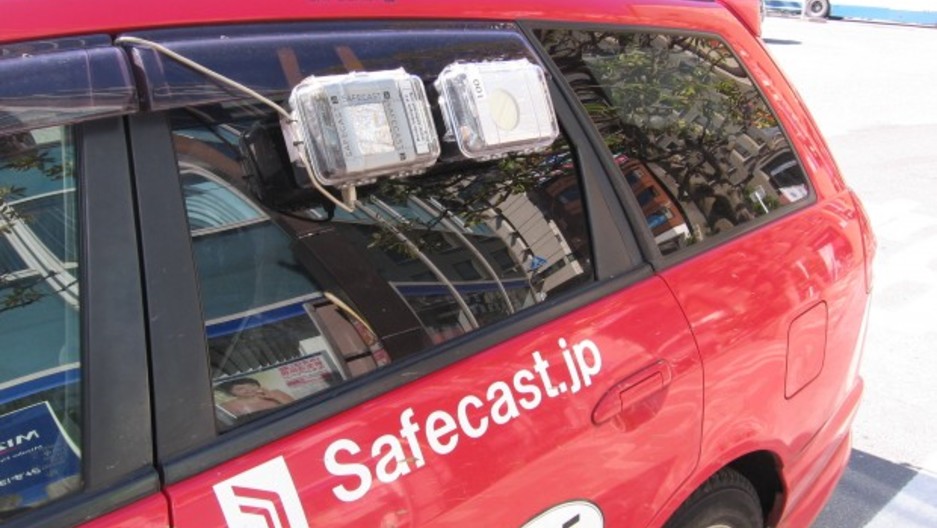 Safecast’s portable radiation detectors can be attached to the window of a car so the driver can take radiation readings street-by-street and then upload them via the Internet. (Photo by Catherine Winter.)

On a sunny spring morning just outside Tokyo, Joe Moross hooks up a radiation detector outside the back window of a little red car.

He looks at a map of the area on his laptop computer, trying to find a route he hasn’t driven before, so he can take new radiation readings.

“We want to cover every street so people who look at our maps can drill down and zoom in and find out what the measurement is right in front of their house,” Moross said.

Moross is taking measurements for Safecast. Since the nuclear accident at Fukushima Daichi two years ago, volunteers like him have been driving around Japan, testing radiation and adding their readings to online maps.

In May of 2011, the group had just formed and had posted a handful of radiation measurements. Now, Safecast volunteers have taken close to 10 million separate readings.

“In the last 18 months, I’ve driven close to 50,000 kilometers, so about one and a half times around the world,” he said as he drove through Chiba prefecture, past a jumble of convenience stores, houses, and small orchards.

His Geiger counter automatically takes readings every five seconds and writes them to a memory card.

Moross is an engineer. He’s also a hacker — hacker in the sense of being a person who alters machines to make them more useful.

He’s lived in Japan for decades. When the tsunami struck two years ago and triggered a nuclear meltdown, he wanted to do something to help. People were desperate for information about where radiation was falling.

“So I got out a few of my devices and put together a monitor and got a Twitter account and started tweeting my readings,” Moross said.

Then, he discovered that other people had the same idea. He found out about the newly-formed Safecast on the Internet and met up with other volunteers. Some volunteers are Japanese, and some are expats — but the expats tend to be the ones willing to talk to reporters.

Safecast co-founder Pieter Franken is from Holland. By day, he’s chief technology officer for Monex, a Japanese financial services company. But he spends evenings at the Safecast office in Tokyo, wielding a soldering iron or Skyping with distant Safecast volunteers — people at MIT, in Europe, in Los Angeles.

In 2011, Safecast’s portable radiation detection systems fit in a small suitcase. But hackers have made them smaller and smaller.

Franken demonstrates one of Safecast’s bGeiges. The “b” is for bento box because of the device’s resemblance to a small lunchbox.

“So this looks like ordinary kind of thing,” Franken said. “You can clip it on your belt and you can be casual, but inside is a Geiger counter. It has a GPS and a complete computer inside.”

It has a waterproof, shockproof case so it can be attached to a car or bicycle.

Safecast is also working on a drone that can carry a Geiger counter into areas too dangerous for humans.

Safecast has loaned dozens of these devices to volunteers and now offers a kit for people who want to build their own.

All those Geiger counters have gathered a lot of data. Two years ago, Safecast’s map had a lot of blank space. Now, it has more detailed information about radiation in Japan than any other public source. Franken zooms in and out on the online map.

“As you can see, (around) Tokyo, all the roads on the map are basically filled by dots,” he pointed out.

The dots are radiation readings. The map is color-coded, so you can see where levels are higher. One thing this data reveals is that being near the nuclear plant doesn’t necessarily put you in danger — and being far away doesn’t necessarily mean you’re safe.

Radiation didn’t spread in a tidy circle. There are hot spots here and there, depending on things like how the wind blew and whether there were hills.

“In cities (like) Fukushima City or Koriyama City there are really big differences street by street,” Franken said. “That’s why measurement street-by-street became more relevant: because my street is not your street and I’m not safe until I know my street is safe.”

The Japanese government also measures radiation, but it doesn’t provide this much detail and doesn’t make it easy to read like this. And not everybody trusts the government data.

Safecast’s software and devices are all open source, and anyone can use the data. Franken says it’s being used by researchers around the world and even by the government in some Japanese cities.

“And you can come up with lots of things that can come from it which we can’t imagine today,” he said. “But as it is available suddenly people say, ‘I want to tie this data with this data.’ For example, you can tie specific medical symptoms to radiation levels.”

That kind of research hasn’t been possible in the past.

“If you look at Chernobyl and the other accidents and Three Mile Island, they have one thing in common: The data is very limited and most of the data was subjectively measured” by governments and other organizations, Franken said. “So now as society we have a huge chance as researchers, individuals, companies, to put our hands together. And at least let’s do a really, really good job at measuring it, so that as things happen over time maybe we can get a much better understanding of what it actually means for individuals.”

Safecast volunteers are still filling in holes in the map. They’re also going back to places they already measured, to see how things are changing. They’ve found that in some areas, radiation levels have dropped more than you’d predict just based on half life. It’s not clear why.

Franken speculates it could be because of erosion or natural deposits of new topsoil.

Safecast has also just launched a new project. Recently, it received a grant from the Knight Foundation to use its crowd-sourcing techniques to measure air quality in Los Angeles and Detroit. Franken says, like radiation, air quality tends to be measured only in very spotty ways. A city may have only one monitoring station.

“If you want to know what’s around your house, you’re out of luck,” Franken said. “So we want to take that as our next big challenge.”

The idea, once again, is to use ordinary people to gather the data, so that they can find out what they’re breathing and share that information with anyone else who wants to know.

Catherine Winter is a reporter for the public radio series BURN, from SoundVision Productions.