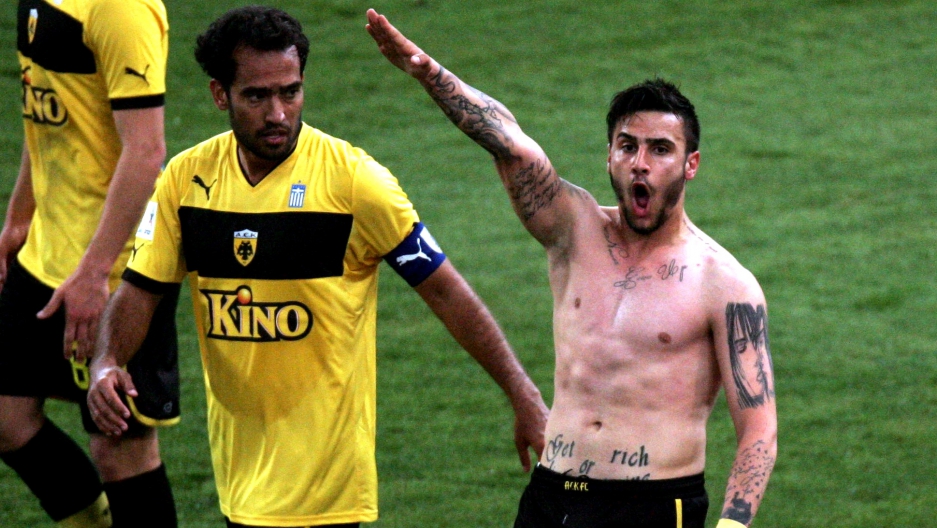 Greek soccer player Giorgos Katidis celebrates a goal with a Nazi salute during a match in Athens.
Credit: STR
Share

BRUSSELS, Belgium — The appointment of Italy's first black cabinet minister was a cause for celebration for anti-racism campaigners in Europe.

Their joy was cut short by reactions to Congo-born Cecile Kyenge taking office.

"This is a bonga bonga government," said Mario Borghezio, a member of the European Parliament representing Italy's Northern League party. "It seems to me she'd be a great housekeeper, but not a government minister."

Borghezio's comments were widely condemned within Italy and across Europe.

Yet in the days that followed, more outbreaks of racism illustrated what activists denounce as a trend of growing intolerance fueled by Europe's economic crisis.

Hungary's third-largest political party warned the country was being "subjugated by Zionism" as it protested against the World Jewish Congress holding a meeting in Budapest.

French anti-gay marriage protesters producer a poster (below) portraying Justice Minister Christiane Taubira, who is black, as an evil gorilla. In Athens, authorities clashed violently with a Nazi-influenced party whose electoral support has soared.

"There is definitely an exacerbation of negative perceptions of migrants, and ethnic and religious minorities, with the current economic crisis," said Georgina Siklossy, spokeswoman at the European Network Against Racism, formed by campaign groups from 26 countries.

"It's become common to accuse migrants and ethnic minorities of stealing jobs, benefiting from social services and abusing the welfare state," she said.

Pan-European figures on racism are hard to come by, due to differences in definitions and reporting among national authorities. Support for openly racist or anti-immigration politicians is on the rise in several countries, however, and activists report a rise in hate crime and discrimination.

Greece, the country hardest hit by the euro zone crisis, has emerged with serious racism problems linked to the rise of the Golden Dawn party.

The Nazi-inspired movement saw its support rise from 0.3 percent in 2009 elections to 7 percent last year — winning 21 seats in parliament with the slogan: "So we can rid this land of filth."

Its black-shirted followers are blamed for several of the 154 incidents of racist violence documented last year by Greece's Racist Violence Recording Network, which was set up in 2011 with support from the United Nations' refugee agency.

In the latest high-profile case, a 14-year-old Afghan boy was left with severe facial scaring last week after a beating from a group of men dressed in black, one of whom attacked him with a broken bottle, Greek media reported.

“Democracy in Greece is seriously threatened by the upsurge of hate crime,” Nils Muiznieks, the Council of Europe's commissioner for human rights, said after a study visit to the country early this year.

Greece is a special case, says Ioannis Dimitrakopoulos, of the European Union Agency for Fundamental Rights, who rejects the idea of a generalized increase of racism across Europe resulting form the economic crisis.

"The economic crisis does feed into a variety of reactions and racism is one of them [but] it's quite localized and depends on specific local conditions," Dimitrakopoulos said from the agency's headquarters in Vienna. "The data we have does not indicate a general movement across Europe."

He points to the lack of a Greek-style backlash against migrants in Spain or Portugal, where the economic crisis has also taken a heavy toll.

In northern Europe, he says, anti-immigration parties have suffered losses in recent Dutch and Danish elections.

Traditionally a country that exported emigrants, Greece attracted an immigrant influx during good economic times in the 1990s and 2000s. Its location on Europe's southeastern flank has also made it an entry point for undocumented migrants and asylum-seekers from Asia, Africa and Middle East heading into the EU.

The sudden arrival of newcomers combined with the economic collapse since 2009 have created a perfect storm for racism to develop in Greece. But there are warnings the prolonged recession is whipping up prejudice against minorities elsewhere.

"Fear and prejudice are being spread across Europe mainly by nationalistic and demagogic groups, who are exploiting the current malaise and social despair," Bonino told a conference on the state of the European Union.

Eighteen percent of sub-Saharan Africans and a similar number of Roma Gypsies suffered assault, threats or serious harassment, according to the agency's survey carried out in 2008 across the 27 EU nations.

She says that ignores the positive contribution migrants make to European economies, particularly in countries where declining birthrates are leading to a growing number of pensioners dependent on a shrinking labor force.

Without new immigrants, the labor force would have contracted between 2000 and 2010 in Britain, Luxembourg and Italy, according to a report last year by the Organization for Economic Cooperation and Development.

Siklossy cites studies showing migrants in France make a net contribution of $15 billion to state tax revenues and that Germany's Turkish community adds $49 billion a year to the country's economy.