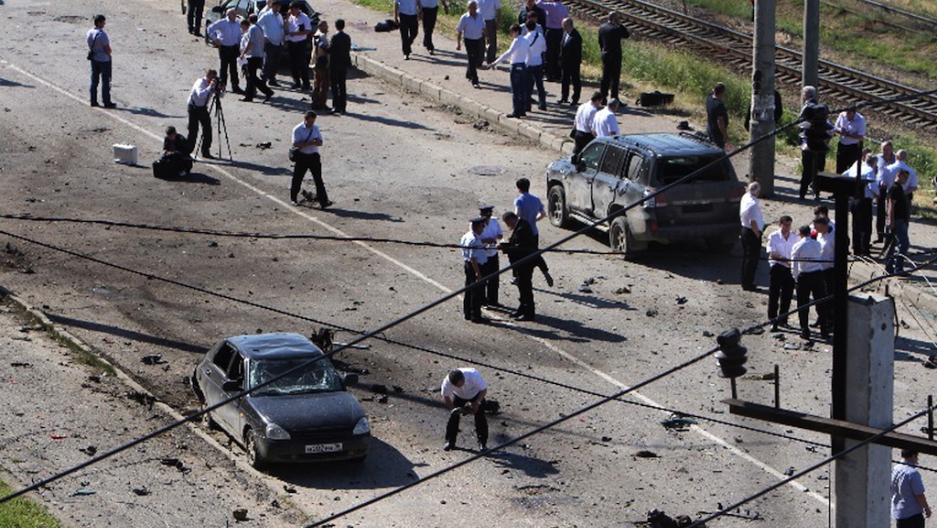 Police work at a blast site outside a building used by court bailiffs in central Makhachkala on May 20, 2013.
Credit: STR
Share

A female suicide bomber exploded outside the Russian Interior Affairs Ministry in Dagestan, injuring at least 12 people, including two children and five police officers, on Saturday.

Police say the bomber detonated a belt she wore in the central square of the regional capital Makhachkala, about 100 meters from the police ministry, after authorities attempted to check her documents.

The victims were transported to hospitals across Makhachkala city, where, according to Russia Today, one woman died due to heavy shrapnel wounds, while two police officers remain in critical condition.

The bomber has been identified as the twice widowed Madina Alieva, 25, who married an Islamist militant killed in 2009, and then married another radical who died last year, according to police spokeswoman Fatina Ubaidatova.

It's not uncommon for female suicide bombers, known as "black windows," to carry out attacks. They are often related to killed militants linked to the Caucasus's Islamic insurgency. At least 24 women have been involved in such attacks since 2000.

Dagestan, located between Chechnya and the Caspian Sea, is an ethnically mixed region that has since two separatist wars in Chechnya become a violent area where insurgents hope to build an Islamic state, or "emirate."

The Tsarnaev brothers suspected of last month's Boston marathon bombing lived in Dagestan before they traveled to the United States. The elder brother, Tamerlan Tsarnaev, was shot dead by police days after the bombing.The younger brother is in policy custody.

About 405 people died in terror-related violence last year in Dagestan.