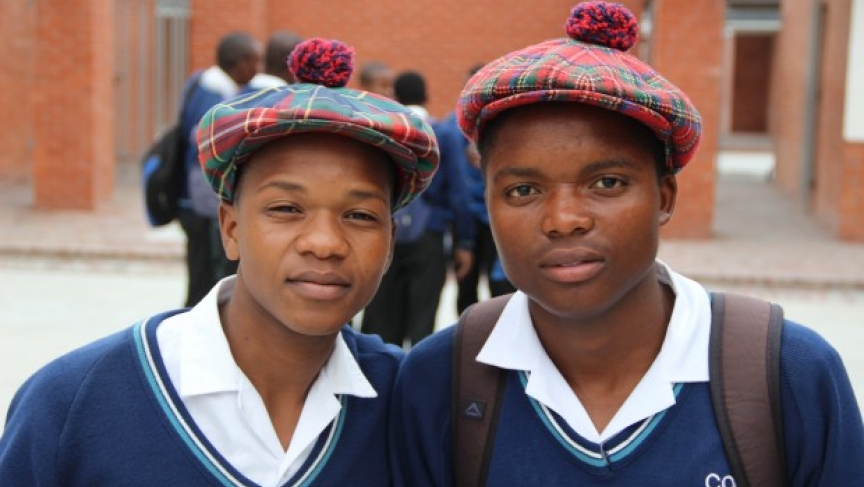 Given and Sive, seniors at COSAT, show off their new man hats. (Photo by Anders Kelto.)

In South Africa, boys from the Xhosa and Ndebele tribes head to the mountains sometime around their 18th birthday to partake in a highly secretive ceremony.

They are deprived of food and water and get circumcised in a rural shelter — all under the supervision of tribal elders. Somewhere in the midst of it all, they undergo an almost magical transformation from boys to men.

But the practice is not without its critics.

Last week, police in Mpumalanga province announced that they were filing murder charges against several operators of illegal “circumcision schools.” The men are accused of being responsible for the deaths of more than 20 boys. Over the past decade, hundreds are believed to have died.

The South African Ministry of Health has clamped down on the use of unclean instruments and unlicensed practitioners — both of which contribute to fatalities and illnesses.

Proponents of medical circumcision — who recommend that the procedure be carried out in a hospital, during infancy — are also opposed to the tribal practice. They say boys who wait until their 18th birthday to get circumcised may already be sexually active, and may be more likely to spread or contract HIV.

Meanwhile, many Xhosas and Ndebeles say their method of circumcision is an important cultural tradition, and must be protected.

While the controversy rages on, students at the Centre of Science and Technology keep on getting circumcised. Some say their lives completely change afterwards.

Mcebici, a 19-year-old senior, said since he returned from his trip, people have been looking at him differently.

“They give you that respect,” he said.

Like his peers, he wears a uniform to let everyone know about his transformation: a blazer, a shirt (buttoned all the way up), and a plaid hat with a fuzzy ball on top.

Mcebici said the uniform, and his manhood, has helped him with the ladies.

“I used to go after girls, and I didn’t have any luck,” Mcebici said. “This year, it is different. They want me to be their man.”

But some girls are skeptical.

“If you’re not attracted to a person before he became a man, it doesn’t mean you’ll be attracted to him after he’s a man,” she said.

Her friend, Bahle, said some boys become a bit rebellious and disobedient once they become men.

“They say, I mustn’t do dishes. Some of them are disrespectful toward women and their families,” she said.

But no matter what their luck in romance, or their attitude towards authority, one thing is certain: the new men look pretty sweet in those hats.

This story is part of a year-long series by Anders Kelto, School Year: Learning, Poverty, and Success in a South African Township.