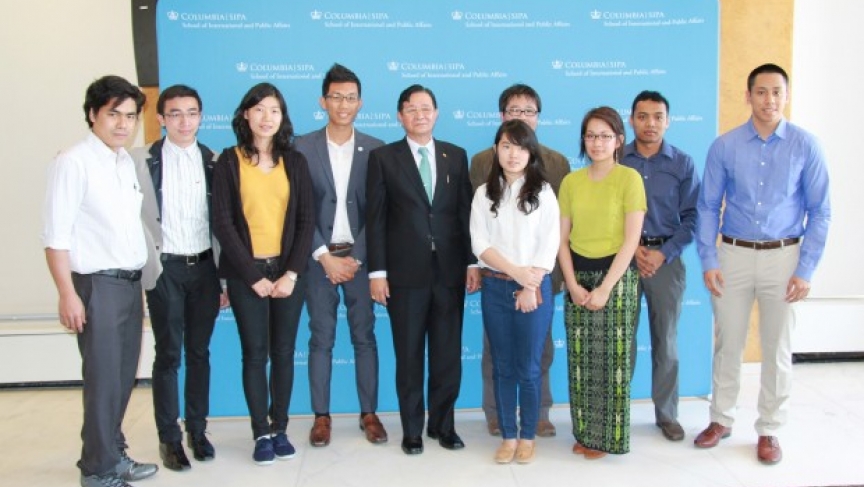 This week, Myanmar President Thein Sein made his first state visit to Washington. It was the first time in nearly 50 years that one of that country's leaders had been welcomed to the US with full diplomatic fanfare. As Mynanmar takes on more democratic reforms, ex-pats from the country are closely watching too.

I met up with two young ex-pats–graduate students at Columbia University in New York, to get a sense of what it's like to be here and watch the changes happening at home.

First, I asked about coming to the US. Way Yee Khine, a 25-year-old graduate student at Columbia University in New York, who is originally from Yangon, Myanmar's largest city, said that she actually learned more about her country once she got to the US. "In our history curriculums there are whole chunks that are not there," Khine said.

"As a child I was very curious and I would ask and my parents would just give a very broad, general answer. It was only here, when I got here, that I realized there are a lot of things that I didn't know."

She didn't know much about the mass anti-government uprisings in 1988. The life of Nobel Laureate Aung San Suu Kyi was another mystery. The activist was under house arrest for most of Khine's life.

"It's sort of like in Harry Potter, how did they call Lord Voldermort, 'He-who-must-not-be-named' or something like that? It was pretty much that. I knew I shouldn't say her name, especially in public."

"I have seen her picture only once in my life, 17 years and a half in Burma," he remembers. It was at a family friend's house. "I was like 'Is that…is that…' and then my mom said 'No! Don't talk about it,'" Khine said.

A clear mark of how much has changed for Kyaw Sit Naing–and for Myanmar–came last September. Aung San Suu Kyi—now freed from house arrest–spoke at Columbia. Kyaw Sit Naing was second in line at the mic to ask her a question.

You can see him ask his question at about minute 33 here:

He stops and starts a couple times, then says that this is the most remarkable moment in his life. Then he asks Suu Kyi if he could work with her if he moved back to Myanmar.

Way Yee Khine was there, too. She asked Suu Kyi what young Burmese like her, studying abroad, could do for the country. "If you really want to come back and help Burma, you must do it with a sense of humility," Suu Kyi said. "Grateful for the opportunity to serve, grateful that you are able to give what others cannot give: I think that's a great necessity."

Both of the Columbia students are now planning their return to Myanmar. Kyaw Sit Naing just received his degree in social work this week, and wants to set up after school programs back home. He says he wouldn't have been so sure about heading back there two years ago, before things started changing.

But the students' parents are a bit hesitant. "My parents are definitely more cautious—they're definitely not as optimistic as us," said Khine. "They want me to come back but they also want me to reconsider if possible to stay here. Because they don't know if this change is for real and for permanent."

The two are not totally starry-eyed. They know there are grim realities on the ground–lots of poverty, poor health and education, continuing human rights abuses.

They also realize that being in the US has allowed them to advocate for their home in ways they couldn't back there. They've formed a Myanmar community group at Columbia, and have met high-level Myanmar officials. Last weekend, they were at a Washington event with President Thein Sein.

"Never in a million years could we do this in Yangon, or in Myanmar," Khine said. "This is something that is very, very unique in that sense, we are here and we are able to speak to them when they come here."

Their Myanmar student group is explicitly apolitical–they want to be able to work with whatever government is in power. And that–proactive students working with the government–is another thing that's very new in Myanmar.