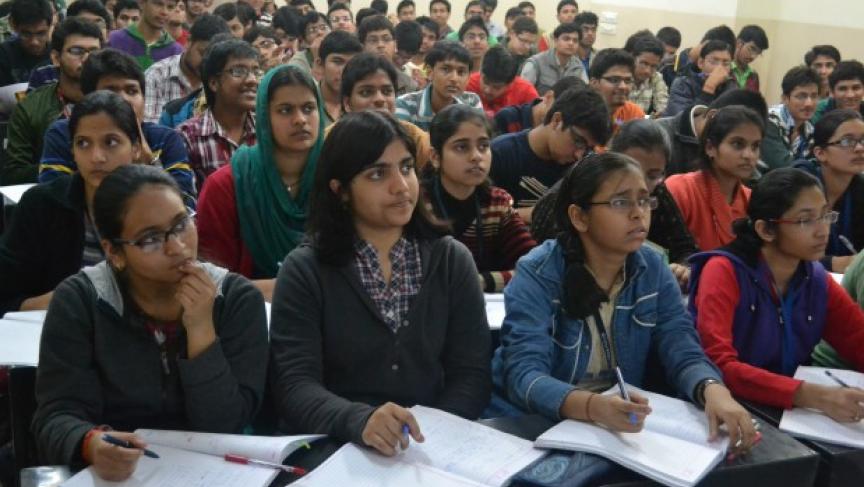 There's a joke about fathers in India. A father says to his son: You can study any field you want. As long as it's engineering.

It's part of national wisdom that an engineering degree guarantees a stable, well-paying office job.

"It's a very enjoyable life. We get higher pays. Many more advantages," says 15-year-old Deepanshu Arora, of Jaipur.

Deepanshu says engineering is his only option, and he's so convinced that he's overlooking a potentially important obstacle: he's bad at math.

"No, I am not good at math and science. This is a challenge for me," he says.

Deepanshu left home after 10th grade and came to the town of Kota, which is famous in India for the dozens of crams schools that prepare students for the Indian Institute of Technology (IIT) exam. IIT is the holy grail of education in India.

Six days a week, Deepanshu spends hours in a cram class learning how to beat the exam. Forget sports, literature, or history. Just math, physics, and chemistry – for two years.

"Only two or three years we have to struggle, and then the life is 'wow,'" he tells me.

It's hard not to think that Deepanshu is exaggerating. After all, there must be other options that don't require expensive cram school for subjects he's not even good at. Cram school costs as much as a year of university.

But that doesn't seem to matter.

"Engineering is not the only option," says Murtaza Phalisiya, 18. "But of course not many Indian students know that. It's either engineering or medical."

Phalisiya also studies in Kota, but he says he's different from many of the other students here. He's sincerely interested in engineering. Unfortunately, he failed the exam on his first try, so now he's here in Kota for a year of tutoring.

Phalisiya and his friends at his hostel say people generally don't study the liberal arts in India.

"If you study the arts. You are scoffed at over here," says Phalisiya. "You're made fun of because it's not paid well."

Phalisiya's classmate, Nitesh Agrawal, also 18, says if you take a psychology class, "you're going nowhere. You cannot expect a future if you study psychology in India."

"Not a very appealing future," Phalisiya chimes in.

According to Phalisiya and his friends, science is the only subject worth studying, and only if it leads to an engineering or medical degree.

The problem is that if everyone tries to go to engineering school, the competition will overwhelm even the smartest kids. IIT only has about 10,000 seats. Half a million students take the entrance exam each year, which means about 50 applicants for every seat. Compare that to Harvard where 17 students apply for every student admitted.

Most of the kids applying to IIT are boys. One of the few girls in Kota cramming for the exam is Deepali Tiwari, who is 16.

"In my whole family, no one yet has cracked that exam," she says. "It's kind of a prestige, you know."

She's aware that on average five kids kill themselves around exam time. She says it doesn't surprise her.

"Sometimes we even get so depressed that we can understand why those guys do that," Tiwari says. Parents "expect a lot from us."

Besides the emotional toll on young people, this obsession with engineering has another unintended effect. The country has a shortage of lawyers, architects, and psychologists. Ironically, it doesn't even have enough professors to teach all the students enrolled in its elite engineering schools.

That lack of professional diversity reflects another potentially deeper problem, on that could threaten India's future competitive edge.

"We are a risk-averse country, and innovation requires risk takers," says Venkatesh Kumar, professor of public policy at the Tata Institute of Social Sciences in Mumbai.
He's been helping the government reform its higher education plans. Right now the plan is to encourage more students to go to college and later pursue research, like students in the United States.

Kumar says that Indian universities should be more like American ones and create what he calls ecosystems for innovation.

But for Deepanshu Arora, the 15-year-old who says he's bad at math, it's simple. He'd like to be an air traffic controller, but the job doesn't pay enough.

"No good college. Then no good job. Then salaries less. Then future is spoiled. No good wife. Or anything else."

So Deepanshu is boning up for the engineering entrance exam next year — he and half a million other would-be engineers.

This story is part of the Global Story Project, with support from the Open Society Foundations and PRX.