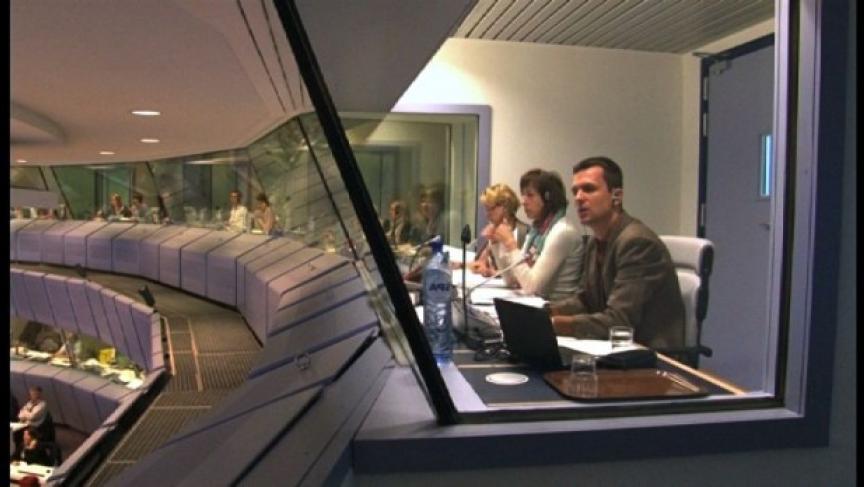 The Treaty of Rome in 1957 founded what is now the European Union, and was supposed to be the beginning of the end of nationalism in Europe.

But over a half-century later, walking through any of the EU buildings in Brussels, it feels like nationalism never went away.

Officially, deputies and delegates will only speak in their national languages, as a matter of principle. Attending them is a small army of translators and interpreters who assure their message is translated into the languages of the rest of the union — at a current cost of $1.4 billion per year.

The big irony, though, is that once they are away from the podium or the microphone, and they are hanging out with other European bureaucrats by the water cooler, they comfortably switch into English, the de facto lingua franca of the union.

“It’s tempting of course. With English you get through everywhere in the whole world,” said Andrea Dahman, head of communications for the Translation Unit of the European Commission. “On the other hand, I’m always saying, if you want to do business you’ve got to speak the language of the client.”

In the EU, in order to speak the “language of the client” — that is the languages of the 27 member states — a long, costly and time-consuming chain of tasks needs to happen.

Once a delegate or bureaucrat delivers a speech in his or her native language, it's taken up by dozens of interpreters, who simultaneously translate into their respective languages, or tune into the English interpretation and translate from that.

Meanwhile, an official release of the speech is produced and sent to the translation unit and a separate group of text-based translators gets to work.

Within the EU institutions, ideology trumps pragmatism, and the founding ideology of the Union is “Unity in Diversity.” Back in 1957, when there were only six member states and four languages, it was an easy credo to follow. But fast-forward to today and things are not so easy: 27 member states and 23 official languages.

It’s costing the EU a lot of money, it’s having a negative impact on its global competitiveness and it will only get more complex as the union continues to enlarge. In July, Croatia will become the 28th member state of the EU, and Croatian the 24th official language.

As the EU gets larger, critics of the multilingual system are becoming more vocal. For Shada Islam, director of policy at Brussels think-tank Friends of Europe, the process is costly, unproductive, and most of all, unnecessary.

“We’re spending too much time and energy on this language issue,” she said. “The world is moving fast, the world is moving ahead and we need to be looking at other ways of fostering diversity and inclusiveness. You do really need to have a common understanding and I think that’s where English came in as the natural language that everyone spoke."

While more respected public policy organizations are calling for establishing English as the language of the EU, the idea remains politically toxic. English is the language of the most eurosceptic country — the United Kingdom. What’s more, France and Germany are very touchy when it comes to having their languages eclipsed by English. Regardless of sentiment, EU officials argue using any single language wouldn’t be democratic, or in the shared spirit of the union.

“Europeans believe, or at least they think they should believe, very much in diversity and in inclusion and that everyone is equal,” Islam said. “It’s an artificial mental set up, if you like. Everyone is not equal. There are big powers, there’s Germany, there’s France ... so we’re not all equal.”

But despite the growing cost and complexity, and the growing skepticism from outside EU institutions, the Union is holding course and shows no sign of shifting. When Croatian becomes the official language in July, the cost of the union’s commitment to multilingualism will nudge up to an estimated $1.5 billion a year.