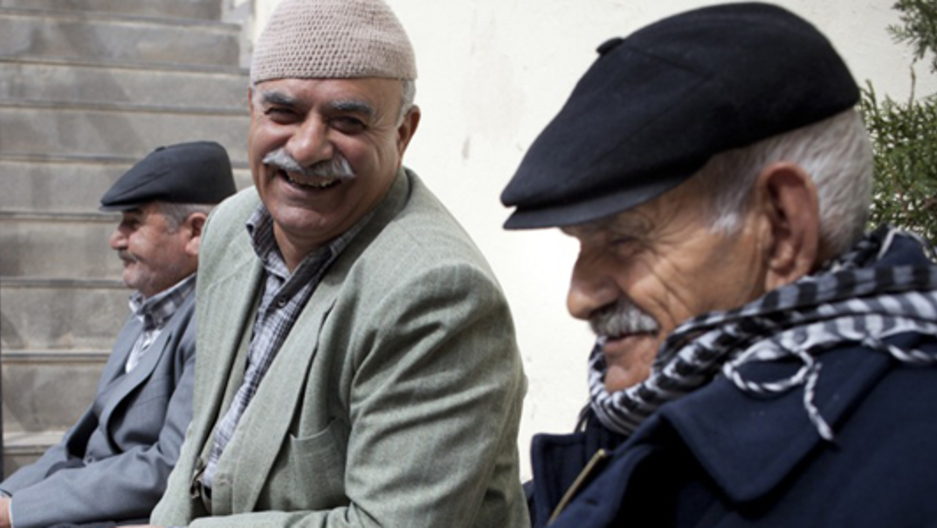 The songs of the Dengbej are individual vocal pieces. No instruments accompany them.

Share
In Turkey, Kurdish culture is having something of a Renaissance. Public expressions of Kurdish culture are now legal. Now a new cultural center has opened for traditional Kurdish story-tellers to practice their ancient art. Reporter Matthew Brunwasser sat in on a session. Somewhere at some point, a woman longed for a man named Sinan. At the Dengbej House in Diyarbakir, a master Dengbej, or storyteller, sings a tale from the collective memory of the Kurdish people. A dozen storytellers, mostly elderly men, sit in the courtyard of a beautifully restored 19th century stone house. Most of the men come every day. They sit and chat and share songs with each other — and any visitors who might be here. Seyitxan Boyaci says in the old days it was very prestigious to be a Dengbej. "When a Dengbej went to a village, people would gather and welcome him like a holy man," Boyaci says. "When I went to a village, I would be given dinner and I would start singing and not stop until the morning." Dengbej use no musical accompaniment. And they never use any written materials. Metin Ozcelik, the supervisor of the Dengbej House, says the stories are often about love and conflicts, wars and rebellions. "The story can continue one, two, or even three hours," Ozcelik says. "So to be a Dengbej you should have a good memory. And you should know the Kurdish language very well, because some of the stories have been written by them. It should effect the listener." Ozcelik says that it's not just a story. "It's a kind of poem. The words are very effective. When they describe a mountain, you feel the mountains. When they tell a story about a girl, you suddenly find yourself in love with the girl. And it's very important for a Dengbej to tell the story with a poetic way." The Turkish government banned Kurdish until 10 years ago, making it very dangerous to be a Dengbej. Mehmet Guli was arrested after an informer told the police that he was a Kurdish storyteller. "They checked my car stereo," says Guli. "They found a cassette and played it. It was in Kurdish. The policemen arrested me, blindfolded me, put me in handcuffs and took me to the basement of a police station." Guli says he was tortured at the station. He says he wasn't an activist then. but after the incident, he says he was more determined then ever to keep up the storytelling tradition. "The government tried to kill the Kurdish language and culture and to make us all Turks," Guli says. "But the Dengbej didn't allow this to happen. If we didn't preserve the memory of all the brutality, killing and pressure against the Kurdish people, it would be forgotten." These days, few young people come to learn from the masters. One who does is Cafere Farqine. He's 22 and perhaps the most famous. Organizers hope the Dengbej House helps the ancient tradition develop, as well as promote it through tourism, publishing and recording. The latest project is a new song about the execution-style murder in January of three Kurdish women activists in Paris.