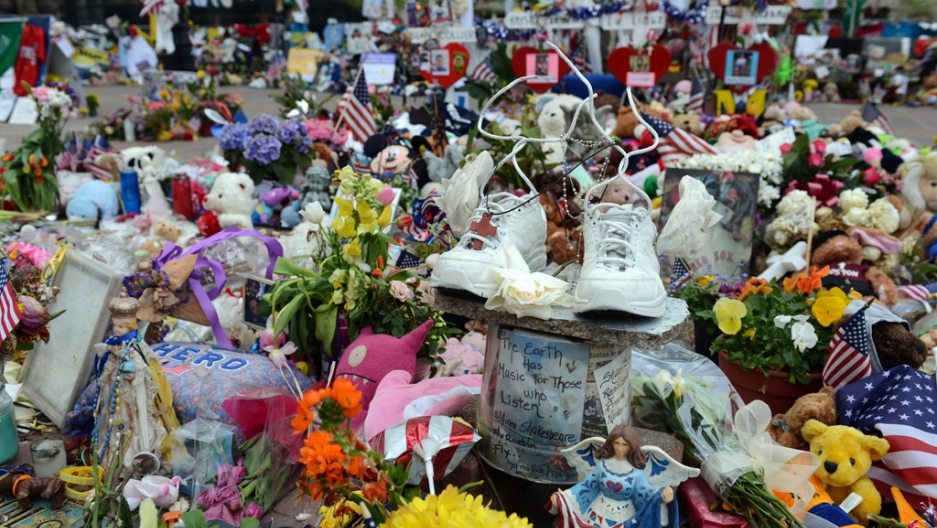 BOSTON, Mass. — Traffic flows down Boylston Street toward the Public Garden, past scurrying shoppers and T-riders, no longer pausing before the faded signs and soggy sneakers in front of Trinity Church. Joggers dart in and around Back Bay with purpose, angling for escape to the Charles River and its stretched, smooth track of pavement. And crowds gather at watering holes around the city, cheering on the Bruins and Red Sox.

As stories about the Boston Marathon bombings have slid off the front page — and out of many Bostonians’ day-to-day thoughts — by many measures, the city has returned to normal. But for some of the thousands of athletes, fans, and emergency personnel on Boylston Street last month when two homemade bombs unleashed ball bearings, nails and absolute terror in the final blocks of the Boston Marathon, the magnitude of what happened on Patriot’s Day is just beginning to reveal itself.

More than 30 days after a traumatic event is when signs of prolonged distress — including sleeplessness, irritability, and feelings of sadness or anger — can become more pronounced, and post-traumatic stress disorder (PTSD), a distinct reality. Although Boston’s primary victim compensation response to the attacks, The One Fund, will not cover mental health benefits, other options exist for those seeking psychological support and their organizers are hopeful that Bostonians will reach out.

“People are going to have significant difficulty coping with what has happened, whether it’s because of what they saw, what they heard, or because they had a loved one or a friend that was injured — or they themselves were injured,” said Dr. Shamim Nejad, the director of adult burns and trauma psychiatry at Massachusetts General Hospital, who has been treating psychological trauma related to the Marathon since day one. “That’s going to cause a lot of difficulty in different spheres of their lives.”

The prevalence of PTSD varies widely according to the nature of the trauma and diagnosis, but many psychiatrists estimate that around 20 percent of people who experience trauma can develop symptoms of the disorder. In the case of the Boston event, experts say that this figure will likely be lower.

PTSD “is only going to affect those up close and personal,” said Dr. Roger Pitman, a professor psychiatry at Harvard Medical School and an expert in the disorder.

Still, experts said that the psychological toll could be strong.

In the initial days and weeks after a traumatic event, many people can feel distress, with symptoms of anxiety, insomnia, distraction and disbelief.

If those symptoms continue, and become heightened to include others such as avoidance, numbing, or intrusive flashbacks, some people may have acute stress disorder. PTSD is the persistence of these symptoms.

The leading treatments for PTSD are cognitive processing therapy and prolonged exposure therapy, according to Dr. Margaret Harvey, associate clinical director for Veterans Programs at the Red Sox Foundation and Massachusetts General Hospital Home Base Program. The idea is to weaken the strength of memories by repeatedly talking or thinking about the event. This can be done in talk therapy, or in real-life situations, such as walking down Boylston Street to the Copley Square memorial.

Medications, including anti-depressants and sleeping aids, can be effective in some cases, but not all. Regular exercise, sleep, and even mind-body interventions can all mitigate the symptoms of PTSD, doctors said.

Much of what we know about PTSD and related stress disorders has been advanced in the last decade, as increasing numbers of veterans have returned home from Iraq and Afghanistan, haunted by vivid memories of violent battles and devastation caused by improvised explosive devices (IEDs).

Since 2009, clinicians at Home Base have treated the “invisible wounds” of more than 500 veterans of the Iraq and Afghanistan wars and families members in the New England area. Home Base estimates that more than 90 percent of its patients have PTSD.

“The experiences of the military have been helpful in identifying what helps healing, what confers greater resilience, what makes for greater vulnerability,” said Dr. Frederick Stoddard, clinical professor of psychiatry at Harvard Medical School.

But there are distinct differences. Those in combat may experience multiple traumatizations over a prolonged period, whereas the Boston bombings was a “single incident stressor,” Stoddard said. Moreover, several experts said, in military situations, danger and personal risk is anticipated.

Boston, by contrast, was an unexpected event. How an individual appraises the danger also shapes their psychological reaction. If someone thinks, “I’m dead, I’m wounded, I’ll die,” said Pitman, “They’re more likely to get PTSD.”

While experts agree that the Boston bombing will have a psychological toll on the injured and bystanders alike, including many of the city’s first responders, The One Fund – the state’s primary victim compensation effort for the bombings – will distribute funding based upon physical injury or death only.

Earlier this month, Boston Mayor Tom Menino and Massachusetts Governor Deval Patrick created the Fund to provide support to victims of the bombings and related events, including to families of the four individuals who died.

The Fund is currently accepting claim forms from victims, and beginning June 30, plans to distribute the more than $32 million it has raised. But The One Fund’s administrator, Kenneth Feinberg, a lawyer who also oversaw distributions of the September 11th Victim Compensation Fund, recently told a Boston audience that the chances of funds going to those who experienced emotional trauma as a result of the bombings were “iffy.”  (The 9/11 fund similarly excluded claims for mental health coverage.)

“It’s not an inexhaustible amount of money,” The One Fund’s deputy administrator Camille Biros told GlobalPost. Administrators wanted to distribute the funds to “those most seriously injured,” she said -- the double amputees, the single amputees, and the families of the deceased.

There are other resources for those in the Boston area suffering from psychological injury related to the bombings, and Biros noted that The One Fund links to some of them on its website.

The Beth Israel Deaconess Medical Hospital, for example, is running free mental health support groups and providing mental health services for anyone affected by the bombings, with support from the Massachusetts Office for Victim Assistance. Cynthia Kennedy, a clinician at the Center for Violence Prevention and Recovery, which is leading the effort, said that her department has seen an increase in calls about mental health services since the attack.

“It is important that those needing psychological assistance in the weeks and months after the bombing get appropriate counseling,” said Attorney General Martha Coakley in a statement.

Since the bombing, more than 150 people have applied for the program, which will reimburse medical expenses up to $25,000 for those eligible. Coakley said that victims should reach out directly to her office for more information.

As Boston recedes in the national light, experts agree that it's important not to forget about the unseen suffering that many residents may be experiencing.

“There is some very effective treatment that can be life changing,” said Home Base’s Harvey. “It takes courage to seek help, but it can be very powerful.”

Additional reporting for this article contributed by Emily Judem.

More from GlobalPost: "Boston Marathon attack: When home is the target"