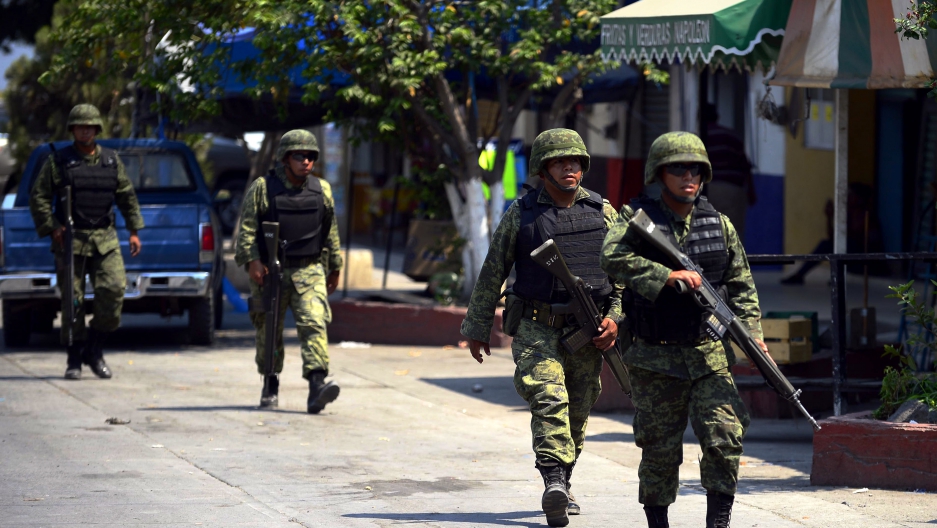 Well, wish him luck with that.

Peña Nieto this week had to dispatch troops to the so-called hot country of western Michoacan to quell confrontations between marauding gangsters and village self-defense militias.

An army general with special forces experience has been placed in charge of the state police.

“Our fundamental goal is simple: to come to Michoacan and not leave until peace and security have been provided for every Michoacan resident,” Interior Secretary Miguel Angel Osorio said Tuesday in announcing the new deployments at a meeting of the federal security cabinet in the state's capital, Morelia.

“This time there will be different results than on other occasions,” Osorio insisted.

The new Mexican president campaigned last year on the promise of calming the violence and more effectively prosecuting the kidnappings, extortion and common banditry that dominates swathes of the country.

Like Calderon before him, he's vowed to return the troops to their barracks once local and state police prove able to stand up to the gangs.

But such efforts mocked Calderon through his six-year presidency. They vex Peña Nieto now.

“They really have no alternative to the military,” security analyst Raul Benitez said in an interview. “The rest is talk.”

In the meantime, Mexican officials have tried to change the discussion with optimistic talk of economic prosperity and social peace.

Though government pressure has pushed news of it from front pages and airwaves, the gangland mayhem continues. Officials have tallied some 1,000 people killed in each of the first five months of Peña Nieto's term. Outside experts smirk at official clams of a double-digit decrease in mob murders compared with last year.

"The incidence of violence hasn't greatly varied since the last months of the Calderon administration," Alejandro Hope, who served in Mexico's intelligence agency during Calderon's watch, commented in his blog. "That's the real reality, the true truth, the cosmic bottom line. The bad thing isn't that a government makes propaganda but that it's believed."

Michoacan's villagers for weeks have demanded more boots on the ground as tensions rose between the citizen militias, various criminal bands and local police believed to be working for the gangs.

The conflict area is being contested by the homegrown Knights Templars, who make their money from drug trafficking and extortion, and a rival group from neighboring Jalisco state.

Federal officials claim that the assault weapons carried by some militiamen — AK-47s and AR-15s — suggest they're allied with mobsters.

"It's a complex problem because there are those who are making the effort and presence to protect their communities and there are others who are not, who are backed and financed by other groups," Defense Secretary Salvador Cienfuegos said at the security event Tuesday.

“We have to be here, free them from that cancer that is the criminal organizations.”

As they deploy, the troops seem under orders to avoid clashes with the locals.

Villagers blocked an army general and more than two dozen soldiers from leaving town Wednesday after troops arrested four vigilantes for ignoring Cienfuegos' order to disarm. The soldiers never gave up their weapons and were sent on their way after six hours after the militiamen were released.

Apart from Michoacan, the recent violence has been worst in neighboring Guerrero state, where several mayors claimed this week that as many as 80 gunmen have been marauding.

A gunbattle killed six men this week on a rural road in the area near where a gangster ambush slaughtered nine local policemen in February.

The military's reinforcement of Michoacan, which will include building a new army base in the most conflicted region near the Pacific coast, came a day after Peña Nieto presented the “National Development Plan” that is supposed to guide his administration through 2018.

On security matters, the plan calls for bolstering police forces and more spending on education, health services and job creation. Peña Nieto has announced a $9 billion effort focused on that social spending in the specific communities identified as breeding grounds for criminals.

Modeled roughly on what the Calderon administration did in Ciudad Juarez, bordering El Paso, Texas, the program appears set to kick off across much of the country worst hit by the violence.

The social spending likely will have some sort of impact, eventually. But for now, it's the generals' hour.

"The narrative can change, perhaps the design of the operation will be more brilliant,” network TV news anchor Ciro Gomez Leyva writes Thursday in his column in the newspaper Milenio.

“But it's the armed forces and the federal police [again] to the rescue of inept if not nonexistent local police … of a governor that desperately asks for help, of citizens who are prisoners of the gangsters."

"And if it happens in Michoacan it has to happen wherever necessary," Gomez Leyva writes. "It's a tragedy.”