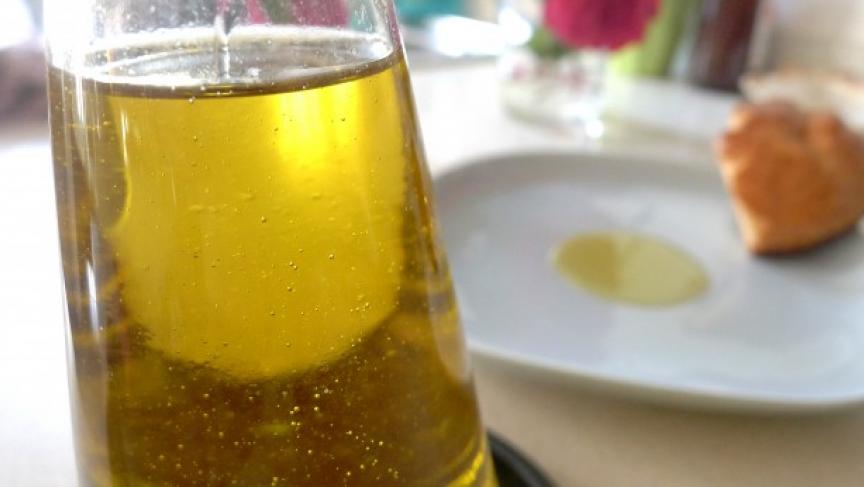 The European Union has banned traditional, unlabeled olive oil flasks like this one in Spain from restaurants starting in 2013. (Photo by Gerry Hadden.)

These are dark days for the European Union, as its five-year-old economic crisis worsens.

Protests in southern Europe over austerity measures dictated from Brussels grow louder, but anger in the south isn’t just over the EU’s economic policies these days. It’s also about olive oil.

In Spain, normally you eat olive oil like this: You grab your little glass oil-flask, pour out a golden green puddle on a plate, add some salt, then dip your bread in it. That’s it. And its eaten at every meal.

What makes olive oil delicious is the rich textures and flavors and varieties. They vary from region to region — even from orchard to orchard.

And in restaurants, chefs sometimes fill oil flasks to match their menus. It’s something you wouldn’t think to mess with. Unless, apparently, you’re the European Union.

“From first of January next year, we can guarantee the quality and authenticity of olive oil,” a European Union official in Brussels announced last week. “And we do that by having new rules on labeling, concerning the category and origin of olive oil.”

The forthcoming olive oil law will force restaurants to serve sealed, throw-away bottles of oil to customers. Gone will be the refillable glass flasks topped up with local oil.

“This is good news for consumers in Europe,” the EU official said.

Now consumers will know exactly where their olive oil comes from, what sorts of olives were used, even its acidity. Some producers have applauded the measure as a way to squeeze low quality or fraudulent oil out of the market. But the measure has left many Spanish restaurateurs slack-jawed.

At a little café in a Spanish village called Vallvidrera, the owner, a guy named Aris, says he’s indignant. Aris drives to his favorite olive orchard, about an hour away, to buy his oil right out of the presses. He tops up his big five-gallon jugs, and each morning at the café he fills his oil flasks by hand, then sets one on each table. Just in time for the breakfast crowd.

He says he doesn’t understand how Europe has can have a problem with this.

“I think this is bad,” he said. “They did the same with wine. Before, you could buy wine directly from the local vineyard, by the liter, filling your own barrels. Then Brussels said, 'no, you have to buy it in bottles.'”

Aris said he thinks the olive oil law is just about being able to charge more taxes.

One of Aris’ customers this morning, a woman named Belen, called the olive oil directive ridiculous.

“Next thing you know they’re going to make us shrink-wrap ice cream Sundays,” she said. “Don’t they realize we have other problems to deal with?”

Such as record high unemployment. Small olive oil producers say forcing them to package each serving of oil in little throw-away bottles is expensive, wasteful, and will drive mom and pop operations under. That would reduce the variety of oils and the complexity of flavors — in short, undermining what makes olive oil a delicacy.

Another restaurant manager in Barcelona, named Ana, is equally incensed.

“What will (we) have to give our clients?” she asked. “Those little ketchup-like packages you get at take out places like McDonalds?”

The olive oil uproar comes at a bad time for Brussels, with euro-skepticism already on the rise. One leading German paper called it the weirdest decision since the legendary curvy cucumber regulation. That norm was meant to define the legal shape of dozens of fruits and vegetables in Europe.